A new paper examines whether Europe and not Africa was the cradle of hominids some 7 million years ago. 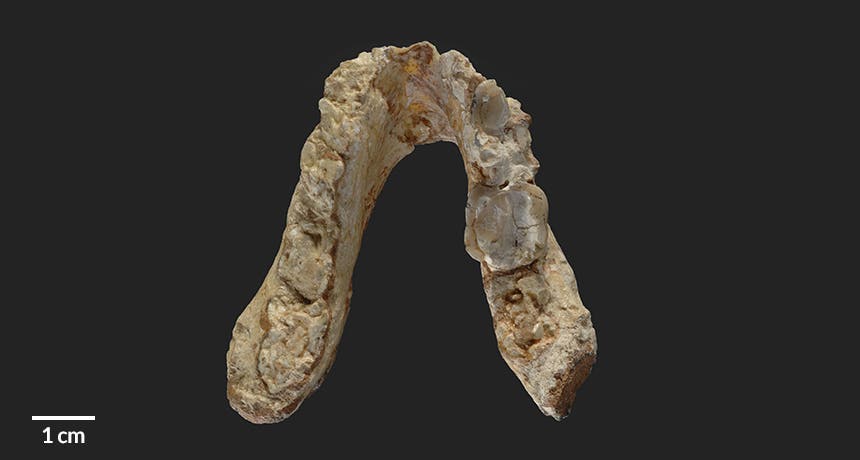 This jaw and teeth were found in Greece and belonged to what might have been the oldest hominid.
Image credits W. Gerber / University or Tübingen.

The teeth of a chimp-sized primate known as Graecopithecus, which lived in southeastern Europe some 7 million years ago, suggests that the species is actually an early hominid and not an ape as we previously believed, a team led by geoscientist Jochen Fuss of the University of Tübingen, Germany, reports. They cite partial fusion of the second premolar root as a particular similarity between Graecopithecus and early hominids.

What makes a man

Graecopithecus could be the first hominid to pop up, the researchers write. One lower jaw, found in Athens with most teeth still in their sockets, was dated to about 7,175 million years ago, and a single upper second premolar found in Bulgaria, to approximately 7.24 million years ago. Still, with only these bits on hand, it’s hard to make an airtight case for Graecopithecus as a hominid. Although the dates match, it’s still a mystery if this creature walked upright — a hallmark of hominids.

So it’s still unclear whether Graecopithecus was an ape with hominid-like features or a hominid with some apelike characteristics. At the same time, however, the team notes that fossil evidence of humanoids in Africa around this time is also pretty sketchy, in some cases even controversial, and revolves around two hominid lines dating to between about 7 million and 6 million years ago, Sahelanthropus and Orrorin.

“Europe is as likely a place of [hominid] origins, and even of the last common ancestor of chimpanzees and humans, as Africa,” says University of Toronto paleoanthropologist and study co-author David Begun.

The team used a CT scanning device to view Graecopithecus’s teeth in full 3D, including the roots hidden by jawbone. Using this model to compare to other early hominids, they discovered the partial fusion of the second premolar root as a striking similarity. Previous research has found that the number of these roots is tightly controlled genetically and doesn’t change due to environmental factors — so the root fusion in Graecopithecus, similar to those seen in later hominids, would suggest a direct evolutionary link. 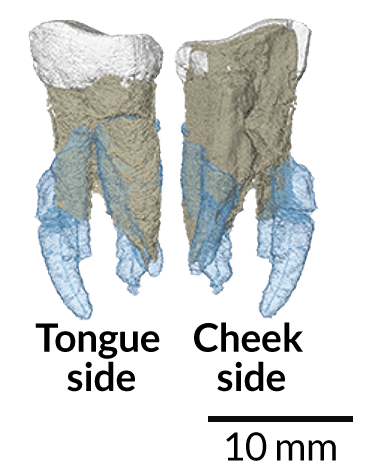 The findings are not without their own criticisms. First of all, some say that the number of premolar roots varies enough even among early hominids to make the fused roots a less conclusive piece of evidence. But, when working with so few fossils from so long ago, it’s hard to prove anything conclusively — for example, the team which discovered one East African hominid, Ardipithecus kadabba, later argued that Sahelanthropus and Orrorin aren’t distinct lineages but can be folded into Ar. kadabba — and that’s not an isolated case.

A lack of hominid precursor (our chimp and gorilla ancestors) fossil, in particular, makes it difficult to establish if creatures such as Graecopithecus or Ar. kadabba are truly hominids since there’s nothing to compare them against. Finally, there was quite a bit of back-and-fro going on between Africa and Europe’s eastern Mediterranean region between 9 million and 7 million years ago, with apes, giraffes, antelopes, hippos, and a host of other critters living and transiting through the region or between the continents, Begun adds, making it hard to pinpoint where everyone came from. So Graecopithecus could have evolved in either Europe or Africa.

But if evidence mounts that Graecopithecus was a hominid and evolved in Europe, the out of Africa theory could find itself into even rougher waters.

The full paper “Potential hominin affinities of Graecopithecus from the Late Miocene of Europe” has been published in the journal PLOS One.