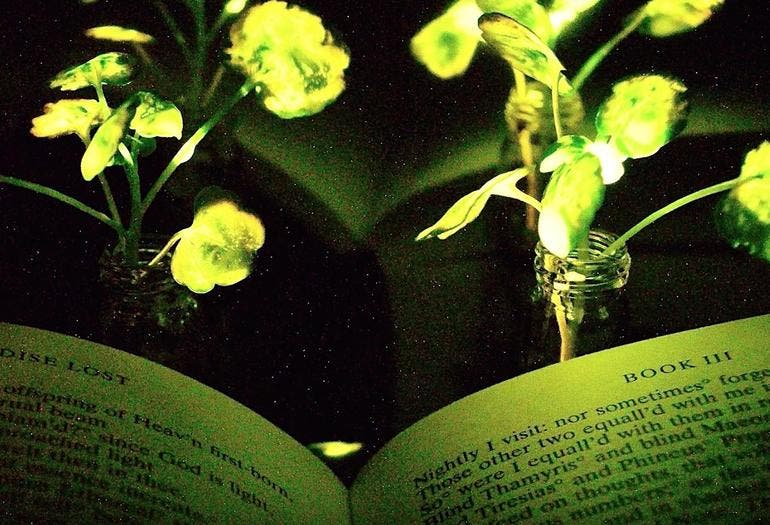 The tropical forests of Northeaster Brazil have their own nightlight: a peculiar mushroom called Neonothopanus gardneri that glows in the dark. Like a street light, it’s tuned to activate its bioluminescence only in the dark, first in the twilight then peaking at about 10 PM. Researchers at Dartmouth College in the US and the University of São Paulo in Brazil have now fond out what this strange behavior is all about: ‘candy’ for insects.

The Brazilian variety isn’t alone. According to Jay Dunlap, a geneticist and molecular biologist at Dartmouth’s medical school, there are 71 discovered species of glow in the dark mushrooms. This might seem like a lot, but considering there are about 5 million mushroom species in the world, these lonesome fungi are quite rare, nevermind spectacular. The  bioluminescence relies on chemical processes inside the mushrooms’ cells which can show up right about anywhere:  the fruiting body, the thready web-like mycelium and even in dispersing spores.

Many of the bioluminescent fungi time their glow around the evening, so as not to waste the energy for nothing during daytime when the sun’s rays conceal the glow. This suggests that this phenomenon is no evolutionary fluke. What’s its purpose, though? The researchers suspected the glow in the dark attracts insects, which like we all know to our own annoyance are highly attracted to light. Fungi of course do not eat insects; they exploit them in another way: to spread their spores among the forest.

To test this hypothesis, the team made some fake glow in the dark mushrooms by placing LED lights underneath them. Sticky tape was put on the mushrooms to trap the insects. At the end of the day, they counted the number of trapped insects by the fake fungi compared to normal fungi, with no LED lights or bioluminescence capability.  A lot more flies and other jungle insects were found in the sticky tape from the fake mushrooms, according to the paper published in Current Biology.

What’s interesting is that the mushrooms peaked at exactly 10 PM, suggesting a highly accurate internal biological clock regulates the bioluminescence. Brazilian researcher Etelvino José Henriques Bechara jokingly says “If he lived [among the mushrooms], he could use the light intensity to tell time.”

They not only look awesome, but they may actually save a lot of power. Light-absorbing glow-in-the-dark road markings have replaced streetlights on a 500m (0.3 mile) stretch of a highway in the Netherlands; this is just a test, and if everything goes alright, then authorities will implement them over longer and longer sections.

The design was proposed back in 2012, and it went through all the paperwork and approvals to finally hit the road now, mid 2014 – and the Dutch are thrilled. One Netherlands news report said, “It looks like you are driving through a fairytale,” which pretty much sums up this extraordinary project. To me, this is a brilliant example of blending together beauty and efficiency – the glow in the dark strips can save a lot of electricity, compared to traditional road lighting.

Roosegarde studio, the developers of this technology describe themselves as a social design lab for interactive Art, Fashion and Architecture. They’ve developed several interesting and sustainable projects aside for Smart Highways, such as a sustainable dance floor, sensor valley and interactive landscapes. They also developed a smog attracting electrostatic field – basically, a smog vacuum, which they hope to implement in Beijing; however, bureaucracy works against them, especially in China, but also in the Netherlands.

Daan Roosegaarde, the studio’s founder and lead designer, told us:

“One day I was sitting in my car in the Netherlands, and I was amazed by these roads we spend millions on but no one seems to care what they look like and how they behave. I started imagining this Route 66 of the future where technology jumps out of the computer screen and becomes part of us.”

His vision goes even further, as he imagined weather markings—snowdrops, for instance, appearing when the temperature goes below a certain level. For now however, the strip of highway only includes glow-in-the-dark road markings, created using a photo-luminescent powder integrated into the road paint, developed in conjunction with road construction company Heijmans.

As of now, they have not signed any additional contracts, probably because road developers are waiting to see how the paint does in terms of wear and tear, but I expect them to be expanding quickly, gaining more popularity compared to the energy guzzling street illumination. The paint lasts for 8 hours after it has been exposed to the sun for a day, even in cloudy days.

Roosegaarde believes authorities are too conservatives and too hesitant in implementing these innovative ideas:

“There needs to be a call to ministers all over the world—this is a problem, and we should not accept it,” said Roosegaarde. “We should create labs in the city where we can experiment and explore these kinds of solutions. Like a free zone. We want to do it safely, but just give us a park [for the smog project] and we’ll prove it to you. Be more open.”

If you’re in Netherlands and happen to drive by the section of N329 near Oss, send your photos in – we’ll publish them for sure.

Man I tell you, you can never have enough mushrooms… it’s really hard to put my finger on it, but for some reason they’re just really awesome; and glow in the dark mushrooms, that’s even more awesome. Not one, but seven of these new species were discovered, increasing the number of luminescent fungi from 64 to 71 (71 species of mushrooms that glow in the dark… that’s really something).

Reported in today’s journal of Mycologia, these discoveries also shed some light on the evolution of luminescence. San Francisco State University Biology Professor Dennis Desjardin and colleagues discovered the fungi in Belize, Brazil, Dominican Republic, Jamaica, Japan, Malaysia and Puerto Rico and these discoveries mean four species that are absolutely new and three new reports of luminescence in already known species. What’s really interesting is that three quarters of these glowing shrooms belong to the Mycena genus, a group that feed off and decompose organic matter as a source of nutrients.

“What interests us is that within Mycena, the luminescent species come from 16 different lineages, which suggests that luminescence evolved at a single point and some species later lost the ability to glow,” said Desjardin

“It’s pretty unusual to find this many luminescent species, typically only two to five percent of the species we collect in the field glow,” Desjardin said. “I’m certain there are more out there.”

They have already named two of the species Mycena luxaeterna (eternal light) and Mycena luxperpetua (perpetual light), inspired by Mozart’s Requiem, and also by the fact that they glow 24 hours a day. Until today, Desjardin has discovered more than 200 glow in the dark species of mushrooms, and while I’m not sure how useful they really are, one thing’s for sure: they’re really cool.