Scientists at UC San Diego have finally collected the fruits of their decade-long labor after they managed to genetically engineered algae that can produce complex antibiotics that prevent cancer, otherwise extremely expensive to develop in laboratories. Cheaper treatment would thus be possible, that’s not only limited to cancer, but a slew of other afflictions otherwise treatable would expensive designer-drugs. 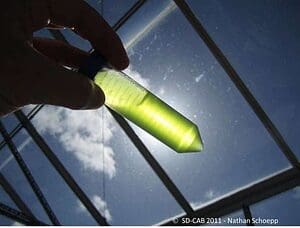 Typically, complex and foldable proteins are typically made from mammalian cells or bacteria in a complex, two-step process by first developing the antibody domain in the cells, then purifying them. Then again the purified cells are then chemically attached to a toxin outside of the cell, before being yet again re-purified.

“Because we can make the exact same drug in algae, we have the opportunity to drive down the price down dramatically,” said Stephen Mayfield, a professor of biology at UC San Diego and director of the San Diego Center for Algae Biotechnology (SD-CAB), a consortium of research institutions that is also working to develop new biofuels from algae.

The researchers used Chlamydomonas reinhardtii, a green alga used widely in biology laboratories as a genetic model organism, to produce a range of therapeutic, complex therapeutic proteins. These were produced using two domains -— one of which contains an antibody, which can home in on and attach to a cancer cell and another domain that contains a toxin that kills the bound cancer cells. The team struck gold in May of this year when they engineered algae to produce an even more complex protein – one they used to create a vaccine that could protect billions of people from malaria.

“What the development of the malarial vaccine showed us was that algae could produce proteins that were really complex structures, containing lots of disulfide bonds that would still fold into the correct three-dimensional structures,” said Mayfield. “Antibodies were the first sophisticated proteins we made. But the malarial vaccine is complex, with disulfide bonds that are pretty unusual. So once we made that, we were convinced we could make just about anything in algae.”

Check the fusion protein described in greater detail by this UCSD video below.

If the researchers could make the protein necessary for the malaria vaccine, then they can do just about anything. But they don’t want to stop here. They’re looking to develop even more complex proteins, impossible to find in nature, for various uses.

“Can we string together four or five domains and produce a designer protein in algae with multiple functions that doesn’t exist in nature? I think we can?” he added. “Suppose I want to couple a receptor protein with a series of activator proteins so that I could stimulate bone production or the production of neurons? At some point you can start thinking about medicine the same way we think about assembling a computer, combining different modules with specific purposes. We can produce a protein that has one domain that targets the kind of cell you want to impact, and another domain that specifies what you want the cell to do.”

The research project was supported by grants from the National Science Foundation and The Skaggs Family Foundation.

I’m really not sure what to think about genetically modified food; in theory, it seems like one of the best ideas ever, but if we don’t fully understand the ramifications of the modifications, it can have really harmful effects. But still, the study I’m going to tell you about is not that. It’s about the effects bug killing korn has (that’s a great name for a rock album, by the way).

The corn was genetically modified to produce an insecticidal protein called Bt that had remarkable results: it reduced damage done by corn-borer (corn’s biggest enemy) by 20-70%. Overall, since the introduction of this protein 14 years ago, farmers only from Illinois, Iowa, Minnesota, Nebraska and Wisconsin reported a benefit of almost 7 billion dollars.

But what’s really interesting is that most of this benefit was reported from traditional non-modified corn, which was able to grow in less stressful conditions, without the stress of insects.

“That’s sort of the wow factor,” Bill Hutchison, the head of entomology at the University of Minnesota and lead author of the study, said in a telephone interview. “We didn’t realize until we started really adding it up over 14 years that that two-thirds of the benefit is on the non-Bt corn acres.”

Every farmer who uses Bt protein corn is required by law to plant at least 20 percent regular corn to prevent bugs from developing a natural immunity to the pesticide; so since Bt corn farmers plant conventional corn to, they also feel the residual effect the protein has. But even if the corn borers are facing their darkest days, they can still be a danger in years to come.

“Farmers are asking, ‘If populations are low, do I still need to pay for this Bt technology?’” Hutchinson said. “Our models also show that if they just stopped planting Bt corn, in about 4 to 5 years the corn borers probably would come back.”