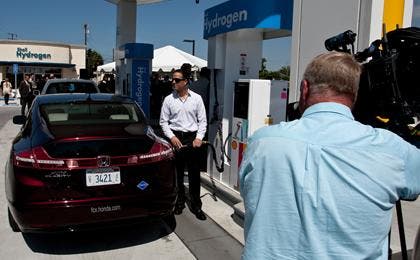 A Honda FCX Clarity was the firstretail fuel-cell electric vehicle customer to refuel at the new Shell hydrogen station in Torrance, Calif., on May 10, 2011. (c) Honda

Toyota is the leading electric car manufacturer in the world, and now the Japanese automobile manufacturer is prepping to dominate another emerging green auto market – the hydrogen fueled car market.

The first step hydrogen fueled cars need to take to actually make it, and maybe sometime in the not so distant future to actually go mainstream, is to have an infrastructure. This first step was made just recently when the first hydrogen refuelling station in the US which is fed directly from an active industrial hydrogen pipeline went operational.

The hydrogen fuel station is located in Torrace, a suburb of Los Angeles, and was oppened in cooperation between Toyota, who owns the land on which the station was built, and Shell, which works directly with Air Products and provides on-site equipment and station maintenance. Air Products’ also provides storage and dispensing technology and hydrogen compression; and currently has the requested fuel capacity of 50kg per 12hour day. Quite a joint venture.

Los Angeles is home to probably more hydrogen vehicles than anywhere else in the U.S., which doesn’t necessarily say a lot since there are only a handful, but the new station is only the seventh in the region, so  if hydrogen vehicles ever take off, then SoCal is likely to be the place.

The station will also feature a learning centre that provides hydrogen and station information to local students and the general public. The arrival of the site will also make the City of Torrance part of the California Hydrogen Highway Initiative.

Fuel cell cars are still a long way though, and don’t expect to see too many hydrogen fueled cars in the near future. The current procedure is so intricate and exclusive that only a handful of people are currently driving such vehicles, most of which are actually test drives. But it’s starting to take off, bit by bit.

About three years ago, Honda started leasing the Clarity, a fuel cell car, to qualified people. Now Mercedes-Benz joined the bandwagon as well, and started leasing it’s own fuel cell car. It isn’t cheap at $850 a month, but that includes insurance and the fuel once stations start charging for it. Besides the high price, you need to also live near a hydrogen station to be considered for the waiting list.

“Currently, that’s our biggest challenge,” said Mercedes spokesman Larkin Hill. “The technology is ready, but the fueling is an integral part, and we need to have people live next to or close to a fueling station.”