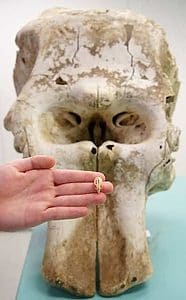 Around 140 millions years ago, mammals didn’t even outsize a modern day mouse, as dinosaurs dominated Earth’s crowded surface. As the latter became extinct, a myriad of free ecosystems and niches opened up, including those once dominated by giant plant eating dinosaurs, and mammals where quick to fill these up. After compiling and analyzing a fossil record data set of mammal body size during the last 70 million years, researchers established some very fascinating growth rates, of great interest to the study of evolution. For instance, scientists found that it took 24 million generation for a mammal to grow in size from mouse to elephant proportions.

As modifications occurred in their diet, environment, metabolism and so on, mammals naturally evolved. But how fast does evolution occur, and does the rate differ for certain types of mammals? Well size-wise, it’s been found that odd-toe ungulates (horse, sheep, rhinos) have the highest rate of growth, rodents are somewhere in between, carnivores at the bottom, while primates have an even lower rate of growth in size. In the oceans, however, body size could change twice as fast.

To come to these conclusions, the researchers analyzed the teeth, skulls and limb bones of ancient animals to estimate their size, and then compared them with current day species. It took whales 5 million generations, or 30 million years, to go from 25 kilograms to 190 tons, or the weight of blue whale. Actually, marine life, whales in particular, are the only mammals getting bigger nowadays. As habitat loss, global warming and human hunting are rampant, it doesn’t pay to be big anymore – size can be lost 100 times faster than it’s gained, according to the study published this week in Proceedings of the Royal Academy of Sciences.

In a previous study we showcased on ZME Science, researchers found that for every degree Celsius added in temperature, a variety of plants lose between 3-17% in size, while fish shrink by 6-22%.

UPDATE: a recent massive study that analyzed hundreds of living and extinct mammal species, coupled with thousands of images, found that the earliest placental mammal surfaced some 200,000 years after the dinosaurs went extinct , roughly 65 million years ago.