Engineers in Slovakia finally made a SciFi dream come true. Their hybrid car-aircraft vehicle, aptly dubbed AirCar, recently completed a daring 35-minute flight between the airports at Nitra and Bratislava. The vehicle transformed from a sleek four-wheeler into an aircraft in only two minutes and 15 seconds.

AirCar is the brainchild of Professor Stefan Klein, CEO of Klein Vision. The company has developed the prototype over the last two years with less than two million euros in investment.

The AirCar Prototype 1 is powered by a 160 horsepower BMW engine and comes equipped with a fixed propeller. It has two narrow wings that fold down along the sides of the car when converted into airplane mode. It can carry up to two people.

Flying cars are believed to be an integral part of the transportation of the future, promising to clear some of the horrible traffic that plagues most busy cities across the world.

However, many limitations have to be overcome before we can commute to work like the Jetsons. The AirCar needs a runway to both takeoff and land. A drone-like vertical takeoff and landing would be required in order to enable mass adoption. Drivers would also require a pilot’s license to boot, which may be out of reach for many unless future prototypes are completely self-driving. However, an autonomous flying car would have to go through immense regulatory hurdles before it is allowed to carry people.

For their part, Klein Vision isn’t interested in taking cars off the road and into the sky. The company is interested in grabbing a share of the aircraft market rather than the auto market.

“There are about 40,000 orders of aircraft in the United States alone,” Anton Zajac, an adviser and investor in Klein Vision, told The BBC. “And if we convert 5% of those, to change the aircraft for the flying car — we have a huge market.”

Klein Vision is now working on a second prototype that will boast a 300-horsepower engine, allowing it a top cruising speed of 300 kilometers (186 miles) per hour. The company is also interested in three- and four-seater versions, as well as an amphibious model that will allow passengers to travel across land, water, and air.

Other companies are interested in the air-taxi business. At last year’s Consumer Electronics Show in Las Vegas, Uber and Hyundai unveiled plans for a joint venture consisting of an electric flying taxi. Volkswagen said early this year that it is currently looking to fly vehicles in China. Elsewhere, Porche, Daimler, and Toyota have all invested in startups known for developing electrical vertical takeoff and landing (eVTOL) vehicles. Last year, Toyota-backed SkyDrive completed the first flying car test in Japan’s history.

Airbus wants people to ditch cars in favor of vertical takeoff and landing machines (VTOL) a.k.a flying vehicles. The company hopes to test its first prototype by the end of 2017, two years ahead of schedule.

Information technology has progressed immensely in the past decades. Right now, most people hold in their pockets a computer that’s millions of times more powerful than the machines employed by NASA to put man on the moon. In other areas, however, progress has been slow when compared to the pace of IT development. For instance, it takes just as long to reach New York from London as it did in the 1970s. It takes much longer, actually, if you’re posh and remember the Concorde. Where’s my flying car? Everyone promised I’d get to have one in the 21st century. Well, leave it to Airbus to finally make that Fifth Element fantasy a reality.

“One hundred years ago, urban transport went underground, now we have the technological wherewithal to go above ground,” Airbus CEO Tom Enders at the DLD Conference in Munich. “We are in an experimentation phase, we take this development very seriously.” 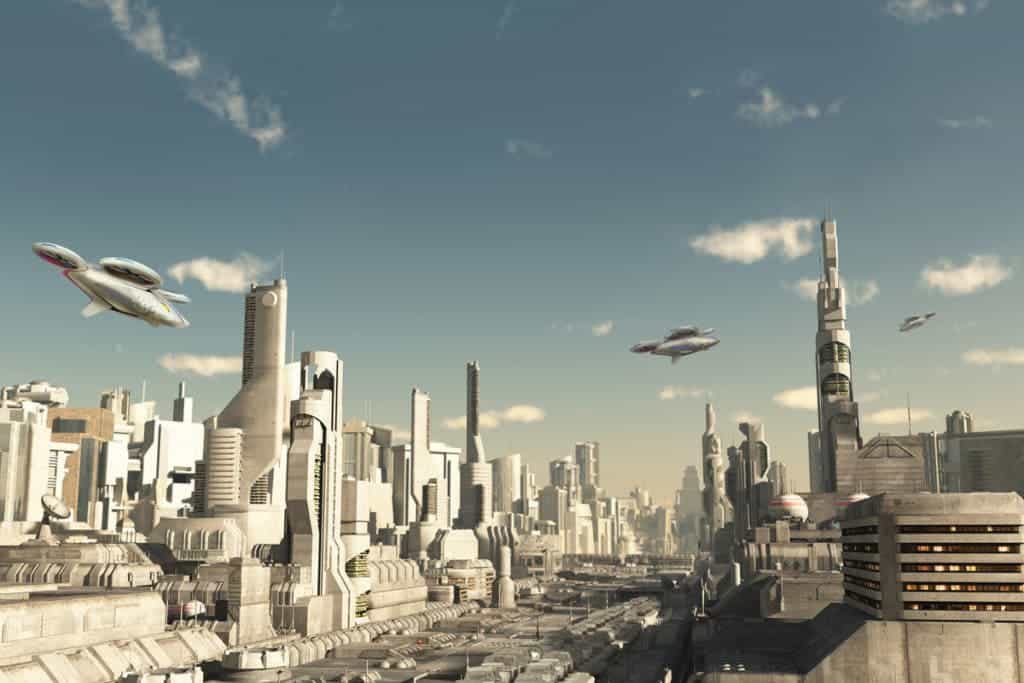 Enders says there are a lot of advantages to flying cars. Such vehicles can greatly reduce the expenses cities and governments incur from having to build and maintain transport infrastructure. You don’t need roads or bridges for VTOLs. Traffic can become a trivial issue since you can vertically stack as many lanes as you need. Then, of course, flying is the fastest way to reach point B from point A.

Enders thinks that recent developments in autonomous vehicles and artificial intelligence are priming the world for a revolution of transportation. This aerospace industry leader doesn’t want to be left out. “We are in an experimentation phase, we take this development very seriously,” he said.

What’s particularly interesting about this seemingly SciFi project is that Airbus’ prototype might be all-electric or at least hybrid. And like the cars of the future, it will be completely autonomous.

“This market will develop quickly once we are able to deploy the first vehicles in megacities and demonstrate the benefits of quiet, emission-free air transport at competitive prices,” said Jorg Muller, from Airbus’ corporate development department

Chinese drone making company  Ehang recently showed off one of the most impressive contraptions at the CES convention in Las Vegas: a manned drone. It can fly as high as  11,500 feet, top speed of 63mph and a range of 20 minutes worth of powered flight. It can fit one person and a small backpack. It looks and sounds impressive, but is the world ready for it? For sure no, but the prospects for the future already sound appealing. Finally, the age The Jetsons foretold might finally be nigh.

The other day I was listening to a speech by Peter Thiel, a serial entrepreneur and venture capitalist who, in a moment of disappointment with today’s technological progress, famously said: “They promised us flying cars, but all we got was 140 characters.” Hilarious, but so true! What Thiel was alluding to was that while computers and information technology have made fantastic leap forward, the same thing can’t be said about other fields of science where progress looks more like incremental than exponential. Humans haven’t been to the moon for decades, and it still takes just as long to fly from New York to Paris as in the 1970s. The trip actually takes longer if you consider the Concorde’s decommissioning.

‘You know how it feels to sit in a Ferrari? This is 10 times better,’ said George Yan, co-founder of Ehang.

We can’t seem to trust governments to change the world, considering funding seems to go more and more to ‘safe’ research – the kind that’s expected to work. So, it’s up to entrepreneurs like Elon Musk — who wants make a pressurized tube called the Hyperloop that will get you from L.A. to San Francisco in 35 minutes flat — to change transportation. Huazhi Hu, the EHang CEO, is also up to bold plans.

The 184 uses multiple independent flight control systems to automatically navigate passengers from point A to point B.

Imagine leaving for work not in a vehicle, but in a fully autonomous flying drone that will get you there in no time. That’s what we were promised at some point, and Huazhi wants to deliver it.

‘Mass-adoption of the 184 has the potential to streamline congested traffic and dramatically reduce the kinds of accidents associated with any human-operated vehicle,’ the firm claims.

‘It’s been a lifetime goal of mine to make flight faster, easier and more convenient than ever. The 184 provides a viable solution to the many challenges the transportation industry faces in a safe and energy efficient way,’ said EHang CEO Huazhi Hu.

‘I truly believe that EHang will make a global impact across dozens of industries beyond personal travel.’

‘The 184 is evocative of a future we’ve always dreamed of and is primed to alter the very fundamentals of the way we get around.’

Right now, I expect everyone is worried about safety, as they should be. According to EHang, the manned aerial drone project was started in the first place because current helicopters are too unsafe. Huazhi’s co-founder died in 2011 due to such an accident, and the unfortunate event eventually spurred the company to develop a new generation of propelled flight. The company says that if three of the four arms have their six propellers disabled, the final arm’s working propellers can ensure a rough landing by spiraling toward the ground.

Of course, this is still just a prototype. From a Microsoft Surface tablet, the passenger selects his flight plan then only hits “take off” or “land”. That’s it. At this time, there are no backup controls and this sounds scary, but nothing engineering can’t solve.