We humans arguably came to dominate the world thanks to our dexterous hands, which allow gripping tools and manipulating objects. An eccentric professor at University of Utah agrees, but with a twist. According to David Carrier there’s a secondary evolutionary driver that led our hands to reach their current shape and dexterity: fist punching. To illustrate his hypothesis, Carrier turned to a macabre experiment in which cadaver hands clenched in various positions, from open hand to a good old sucker punch fist, were bashed against a dumbbell. Carrier showed that a fist could handle the strike with double the force supported by an open hand before bones started to break. 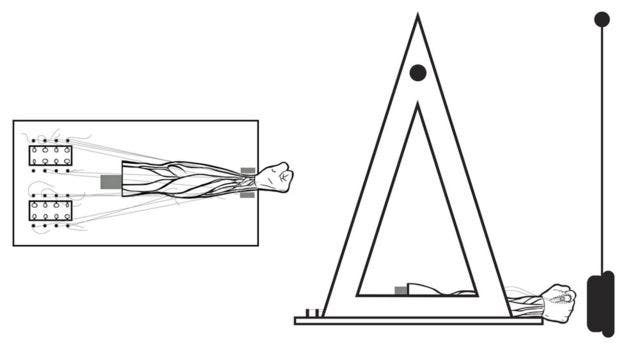 Muscles were contracted by guitar pegs, and a pendulum was used to swing the punch. Image: Andre Mossman/University of Utah

More precisely, fishing wires were attached to the forearm’s tendons, then strapped to a guitar tuner at the other end. By turning the tuner, Carrier and colleagues could flex and position the individual fingers of the hand into any position. They settled for three positions:  clenched fist, loose fist or an open palm. The hands were put on a platform, then a pendulum swung the fists into a dumbbell. Force sensors were attached to both arm and dumbbell. Apparently, the strain on the  metacarpals was vastly reduced in a clenched fist position, compared to any of the other two.

“This is relatively strong evidence that there is a performance advantage,” Prof Carrier said.

“Whether or not natural selection ever acted on that advantage is something we can’t answer directly. But at the same time, given this evidence, you can’t argue that selection on aggressive fighting behaviour was not relevant.”

Of course, that’s not to say that Carrier disagrees with the overwhelming consensus: that hand evolution was shaped by tool use. Rather, he posits that fist fighting  “has to be included on the list of possible factors that could have influenced the evolution of the hand”.

Humans can safely strike under a clenched fist with 55% more force than with an open hand. Image: David Carrier/University of Utah

Carrier says that no other primate can make a fist, and has at one time even gone as far as saying the human face also evolved to take a punch better. Actually, this isn’t the first time he’s tested this hypothesis. Back in 2012, ZME Science reported how Carrier devised an experiment in which different martial artists hit a punching bag, and found the structure of the fist provides additional support for the knuckles to transmit punching force. Again, he didn’t thought this was some evolutionary coincidence. His ideas are controversial. His experiments even more so, but he seems to be making an interesting point at least.

“It also is surprising that the authors compared fist-punching with palm-slapping, instead of with striking by the heel of the palm,” Marzke told The Post. “The latter is well known to be very effective in fighting. It has the advantage of concentrating force over a relatively small area of the hand, an advantage that the author highlighted for the fist in an earlier study. The palm heel punch does not require hominin thumb and finger proportions.”

“At best, pugilistic encounters as an explanation for the evolution of the human hand remains just another story. There are many other behaviors that could be marshaled to explain the morphology of human hand bones,” said Brigitte Demes of Stony Brook University.

Speaking for the BBC, Dr Tracy Kimmel, a palaeoanthropologist at the University of Kent, acknowledged that Carrier’s work is sound, technically speaking, but the findings can’t support the hypothesis. Instead, she argues that there’s strong evidence that  our hands evolved to manipulate tools, considering “fossil evidence of tools goes back more than three millions years, and aligns with changes to hominid anatomy.” Everything else, is secondary.