With the right setup, anything that moves the cables around can be detected — and that includes earthquakes. 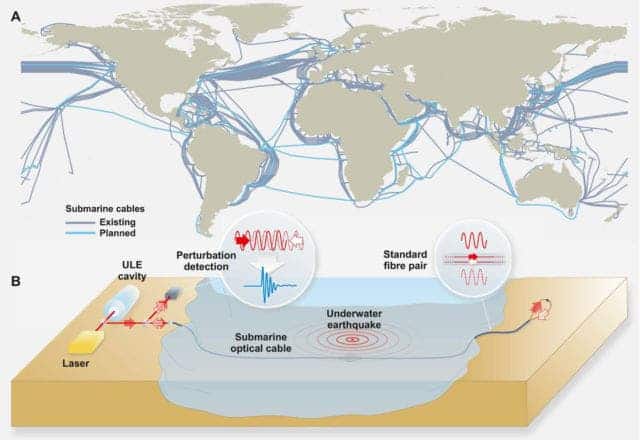 Detecting earthquakes is important both for assessing risks to the population and for understanding the inner structure of the Earth. Thankfully, we have enough seismometers on land to detect all but the smallest (and harmless) earthquakes — but in the sea, it’s a different story.

Over 70% of our planet’s surface is covered in water, and seismometer coverage is limited to a handful of permanent ocean bottom stations. It’s very expensive and logistically difficult to maintain permanent sensors underwater, so there are many gaps. Now, a team of researchers led by Giuseppe Marra of the UK’s National Physical Laboratory has an idea how to fill those gaps.

They discovered the solution accidentally while working on advanced fiber-optic cables. These cables are so fine-tuned that any vibrations can cause a distortion of the signal — which is generally a problem to be solved. But Mara and colleagues realized that one man’s problems can be another man’s solution when they found that one of the vibration sources are earthquakes.

When an earthquake happens, it sends seismic waves through the planet, and as these waves eventually pass through the fiber, they cause a slight delay in the signal. This measurable delay affects the oscillating lightwave can be studied and used to localize earthquakes.

[panel style=”panel-info” title=”Triangulating earthquakes” footer=””]Earthquakes generate several types of waves. The first ones are the primary or P waves, and these are the fastest. The second ones are the S waves, and lastly, the surface waves (Love and Rayleigh waves) arrive. Calculating the delay between the first waves and the subsequent ones is important in locating earthquakes.

Triangulating earthquakes requires — as you’d imagine — at least three seismometers. However, if underwater cables are long enough, opposite ends of the same cable could serve as different seismometers.[/panel]

Researchers tested their technique using several earthquakes, and found that if the cables are complemented with equipment that maintains a perfectly stable frequency of laser oscillations, they can get the job done. The add-on equipment is essential, as the data from the cable itself can’t be used as an earthquake-monitoring signal.

“We detected earthquakes over terrestrial and submarine links with length ranging from 75 to 535 km and a geographical distance from the earthquake’s epicenter ranging from 25 to 18,500 km. Implementing a global seismic network for real-time detection of underwater earthquakes requires applying the proposed technique to the existing extensive submarine optical fiber network,” researchers write.

Since the ocean bottom is riddled with these cables and the system requires only small amounts of power, researchers are confident that this technique can be widely applied. They point out that a similar approach could also be used for other purposes, such as studying noise pollution in the ocean or even tracking marine mammals as they migrate.

The backbone of today’s modern telecommunication industry is held by fiber optic cables. These information highways have accelerated data transfer and help people all over the globe stay connected, but that’s not all they’re good for. A group of international researchers are exploring the idea of using fiber optics as a lab-on-chip device. The tubes would be inserted directly into a patient’s veins, then built-in chemical sensors would detect signature molecules. Essentially fiber optics might become a cheap, ready available light-based diagnosis tool, with far reaching consequences.

If you ever took a blood test you know that it takes at least a couple of days, even weeks before your results come in. That’s because even though collecting your sample only took a minute, the underlying process that follows is far more complicated. Before your cholesterol results are delivered to you, the blood sample needs to pass through bulky and expensive lab equipment, typically operated by a trained technician. This is why blood tests are so damn expensive or why health care as a whole is getting more expensive. What about rural or isolated communities that can’t afford hundreds of thousands of dollars worth of equipment or can’t the staff skilled labor to operate the diagnosis machinery?

One possible solution, proposed since the 1960’s and  in constant development since, is the lab-on-chip. The idea is to manufacturer portable, cheap and easy to use laboratory equipment, preferably the kind that does all the work on the spot in a reliable manner. The lab would include an instrument for reading out results and an array of attachable microsize probes for detecting molecules in a fluid sample, such as blood or saliva. Each probe could be used to diagnose one of many different diseases and health conditions and could be replaced for just a few cents.

Using integrated circuits inside the human body doesn’t seem very reliable however. Our insides are wet and semiconductor materials risk becoming corroded, malfunctioning the whole mini-lab array. Also, with all of today’s modern tech we still can’t fit power sources, processors, and transmitters in less than a few square centimeters – that’s much too big to squeeze through blood vessels. A glass optical fiber doesn’t have these limitations, however – more or less the same as the ones that already span the globe, ferrying voluminous streams of data and voice traffic at unmatchable speeds.

By using light rather than current to read chemical reactions, a photonic chip works reliably in aqueous solutions, is immune to electromagnetic radiation, tolerates a wide range of temperatures, and poses fewer risks to biological tissues. A group at Carleton University, in Ottawa, Canada is currently developing a practical solution for lab on fiber that is easy to make and outputs precise measurements.

It all begins with a standard communications fiber optic cable which is coated on the inside with tiny amounts of germanium oxide, which raises its refractive index, a measure of the speed of light in a material, while the outer cladding is encased in a protective polymer jacket. Fiber optics are so great for data transmission because light doesn’t get lost through the tube’s walls; instead it gets constantly scattered in the core so the signal remains strong. For their lab on fiber approach, the group however need to bind probe segments to the fiber’s core for it to act as a chemical sensor.

Coating this segment probe with a chemical compound, called a reagent, allows the fiber to bind with  target molecules we want to measure, such as blood enzymes or food additives. As light travels through the fiber, some of the light comes in contact with the molecule binding coating which changes the light’s properties. Then by analyzing the characteristics and magnitude of these changes with a standard spectrometer, we can determine the concentration of molecules reacting with the probe.

According to the researchers involved in the research, the lab on fiber is very accurate as some target molecules were detected with concentrations as low as 2 nanograms per liter which translates to roughly a pinch of table salt in a 25-meter swimming pool. Elsewhere, a group reported in 2012 that using a similar set-up they were able to detect the smallest possible variations in snippets of DNA, suggesting the fiber on lab could be used for quick and accurate genetic screening for complex conditions such as cystic fibrosis, cancers, and certain infections.

It might take a while before we see it applied to humans, though, as there are still many challenges that need to be addressed like how to make the coating thick enough to last for months inside the body. A more immediate application is in the industrial sector where it the fibers could be implemented inside machinery or important pipelines.

Optimal intermediate trading node locations; some nodes are in regions with fiber optic dense networks, but others are in the oceans or sparsely connected. Image credit: APS, DOI:10.1103/PhysRevE.82.056104

In a world where the king words are ‘buy low, sell high’, speed is of upmost importance. Stock trading has become more and more reliant on modern ways of transmitting and processing information, and in this process, fiber optic plays a crucial role. While fiber optic does work at 90 percent the speed of light, companies can still exploit physics and position themselves faster in locations capable of more competitive speeds and transactions, at least according to Dr. Alexander Wissner-Gross.

He first published some research on the matter in 2010, and now he’s come back with more conclusive data, and with a list of determined locations which are the optimal sites to compete with the current locations of financial markets. With the basic idea that the shortest distance between two points is a line, he set out to find points which are as close to the center of the line as possible.

For example, if you were trading in New York and in Paris, the best location for you would be somewhere in the middle of the Atlantic Ocean; however, as good as this idea is in theory, there aren’t too many companies willing to build floating offices, so Dr. Wissner-Gross started approximating points close to the center of the line, but where offices can be built. Using the above example, the best place would probably be Nova Scotia.

This probably doesn’t seem like a big deal; but with the competition growing more fierce every day, and with stock offices being less and less dependant on the agitation of urban areas, we might just see a surge in offices appearing in the most unlikely areas, and if placed right, this could just give companies the necessary edge to raise their shoulders above the competition.