It’s common for people living close to rural areas to find various critters ransacking their garages and tool sheds, looking to find something good to eat, or at least some cozy shelter. Usually, it’s rats, mice, or the occasional raccoon, but a man’s garage in Colorado had a very special visitor. The man had stumbled upon a black-footed ferret, perhaps the rarest mammal in North America and the only ferret species native to the continent.

Black-footed ferrets (Mustela nigripes), also known as the American polecat, or the prairie dog hunger, have a distinctive “robber’s” mask that adorns their faces. The mammal has a long slender body, similar to that of a weasel, which is perfectly suited to crawling in and out of holes, where they seek their primary prey — the prairie dog. These ferrets also have black markings on their feet, legs, and the tip of the tail.

In the early 20th-century, farmers and ranchers started culling prairie dogs in massive numbers since their underground complexes were a problem for crops. As prairie dog populations were decimated across the continent, so too were other animals that were further up the food chain, such as black-footed ferrets. In fact, in 1979 black-footed ferrets were declared extinct but a very small remnant population miraculously survived and was discovered in 1981.

A handful of individuals were captured and enrolled in a breeding program that has been going on for decades and, more recently, even involved cloning. The ultimate goal of this program is to reintroduce the animals back to the wild, but this is a very cumbersome process. Reintroduced ferrets raised in captivity have a very high mortality rate since they lack many basic survival skills, making them easy pickings for predators such as owls, coyotes, and golden eagles. They also need food of their own, so the ferrets need to be introduced close to viable prairie dog towns in order to survive.

One of these rare prairie dog habitats in North America is found close to the garage in Pueblo West, Colorado where our little intruder was found. The owner of the garage was sharp enough to capture the ferret in a box before calling Colorado Parks and Wildlife (CPW). When researchers arrived, they used a scanning device that detected a passive integrated transponder microchip inserted between the shoulders of the animal. This confirmed the ferret was part of a group of nine animals recently released on Walker Ranch, a tract of land where more than 120 black-footed ferrets have been released since 2013.

However, this was the first time a resident have spotted a black-footed ferret. These animals are very solitary and tend to keep themselves.

“We don’t know exactly why this black-footed ferret left the colony,” said Ed Schmal, CPW conservation biologist. “We put them into prairie dog burrows, but they may not stay. Sometimes they scramble around the colony to find the right home. This one might have gotten pushed out by other ferrets, and it went looking for a new home. We really don’t know.”

The furry visitor seemed to be in excellent health, though. It didn’t show any signs of injury and the CPW says the animal will soon be released back into the wild.

“This is extremely rare,” Schmal said. “Black-footed ferrets are nocturnal and extremely shy. For some reason, this one left the colony and was seeking shelter. We’re just glad it appeared healthy, not starving or sick, and we were able to capture it and return it to the colony.”

Despite these conservation efforts, black-footed ferrets remain one of the most endangered mammals in the United States. However, despite a radically-altered environment, scientists believe that the recovery of the species is within reach. The U.S. Fish and Wildlife Service is now working alongside scientists to use the latest genetic tools to disease resistance and genetic diversity in black-footed ferrets.

A recent discovery of an extinct mammal called Cronopia promises to help scientists trace the ascent and spread of mammals. 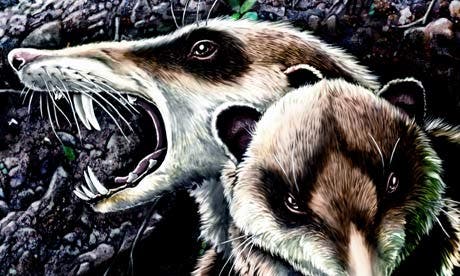 Even though it looks rather taken from a cartoon than from reality, Cronopio dentiacutus was the real deal. It had a long snout, huge sharp canines, and a powerful set of jaw muscles to bite and chew its prey.

The animal lived 94 million years ago, well into the age of the dinosaurs, in today’s South America, and it had quite a lot of competition in the fight for survival. Its fossilized remains were found in Patagonia by a team of researchers led by Guillermo Rougier of the University of Louisville; the results were published in Nature.

The finding is extremely important because mammal fossils from the age of the dinosaurs are extremely rare, and they yield valuable information. Even when they are found – it is usually just jaws or some scattered bones; full skeletons are indeed extremely rare.

“Our knowledge of the first two-thirds of mammalian evolution, which extends from the first record of a mammal about 220m years ago to the end of the Cretaceous period 65.5m years ago, is therefore terribly incomplete,” wrote De Muizon.