Ticks are a much more ancient pain than you’d reckon — some 99 million years ago, they were bitting into (and annoying) feathered dinosaurs. 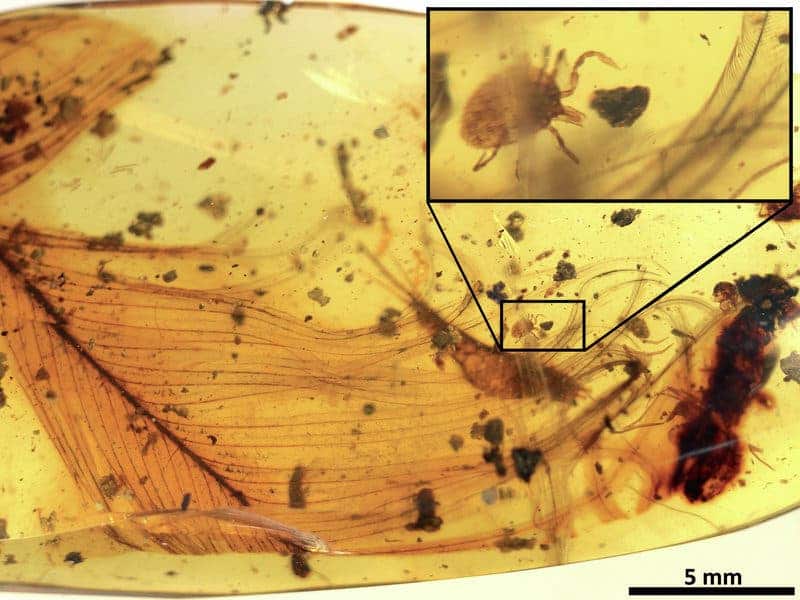 Dreaded today as vectors of Lime’s disease, ticks have been around for far longer than us humans. Being so ancient, scientists have long wondered what or who these insects dined on before mammals came to be. A recent discovery shows that even the mighty dinosaurs weren’t beyond the reach of this tiny, biting menace.

At least, not feathered dinosaurs.

The findings are partially based on amber specimens recovered from Myanmar. While forming, back in the Cretaceous, one of the pieces trapped a tick alongside a dinosaur feather in its hardening resin.

“Amber can actually preserve interactions between organisms. This is the case with the feather and the grasping tick.”

The fossilized interaction lends support to a theory that de la Fuente had been previously working on, largely based on other ticks trapped in amber during the same period. They didn’t get to endure the ages alongside feathers, but the bits of amber that enclosed them did contain little hairs, consistent with the type left behind by a type of beetle larva still seen today in birds’ nests.

So there was evidence in favor of Pérez’s theory, but only of an indirect nature. Finding the feather-and-tick pair provided the link the team needed.

Until now, researchers assumed that ticks dined on early amphibians, reptiles, and the forefathers of modern mammals. Pérez’s theory doesn’t exclude these other types of animals from the menu, especially since feathered dinosaurs weren’t the only animals living in nests at the time, but it does expand on the menu.

Pérez says follow-up research needs to be done to understand how a new species of ancient tick identified in the study, Deinocroton draculi, fits into the bigger tick order Parasitiformes. Furthermore, the finding could help uncover the ancient origins of ticks and their blood-sucking behavior: one tick found in the amber is engorged with blood but the team couldn’t figure out how to analyze it — the tick was only partially encased in amber, so its original chemistry is altered.

The paper “Parasitised feathered dinosaurs as revealed by Cretaceous amber assemblages” has been published in the journal Nature Communications.