New research shows Ceres’ surface is dotted with organic matter — much more of it that we’ve previously realized. The findings raise questions regarding how this material came to be, and why it concentrates in patches. 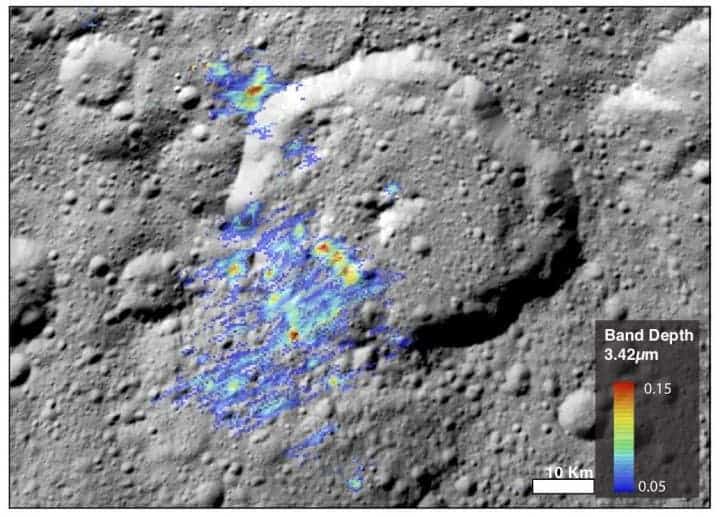 There seems to be more to the organic material the Dawn craft discovered on Ceres last year than we initially thought. The patches of carbon-based compounds may contain a much higher abundance of organic matter than initial analysis revealed, according to a new analysis from Brown University.

“What this paper shows is that you can get really different results depending upon the type of organic material you use to compare with and interpret the Ceres data,” said Hannah Kaplan, lead researcher of the study. “That’s important not only for Ceres, but also for missions that will soon explore asteroids that may also contain organic material.”

The discovery of these organic patches on Ceres last year was made using the Visible and Infrared (VIR) Spectrometer on the Dawn spacecraft, which has been in orbit of the dwarf planet since 2015. The finding was met with enthusiasm at NASA and beyond: organic molecules are, after all, the building blocks of life. So, scientists are understandably keen on finding out how such matter is distributed on planets other than our own. The presence of these compounds on Ceres isn’t proof that there was once life on this bit of rock. However, it definitely increases the odds. Factor in that Ceres also boasts a sizeable stash of water ice, another fundamental requirement for life as we know it, and you get quite the exciting place.

The picture may get even better, however. Dawn’s VIR instrument analyzed the patches on Ceres’ surface using the way its surface interacts with incoming light. By looking at what wavelengths these patches reflected and absorbed, ground control could estimate their chemical makeup. In the region of Ernutet Crater (Ceres’ northern hemisphere), Dawn picked up signals consistent with organic molecules. Next, NASA needed to know just how much organic material they had found — so they compared the VIR data to similar readings performed on samples of organic material from Earth. Based on this comparison, they concluded that Ceres’ spots comprised roughly 10% organic matter.

Kaplan and her team, however, weren’t satisfied with the reference standard NASA used — so they re-did the comparison using a different one. Instead of using Earth-borne rocks, they used samples of carbonaceous chondrite meteorites. Previous analysis of such space rocks that fell to Earth revealed that they contained organic material that is slightly different from that native to our planet.

“What we find is that if we model the Ceres data using extraterrestrial organics, which may be a more appropriate analog than those found on Earth, then we need a lot more organic matter on Ceres to explain the strength of the spectral absorption that we see there,” Kaplan said.

“We estimate that as much as 40 to 50 percent of the spectral signal we see on Ceres is explained by organics. That’s a huge difference compared to the six to 10 percent previously reported based on terrestrial organic compounds.”

The team proposes two possible explanations for how organic material popped up on Ceres in such high concentrations. They could either have been produced on Ceres itself and then blasted to the surface. Alternatively, they could have been delivered by impacts with organic-rich comets or asteroids.

In the case of delivery, comets are more likely culprits than asteroids — the former tend to have higher contents of organic material, around 40 to 50 percent, which would be consistent with Ceres’ patches. However, this explanation seems unlikely, the team notes. The violence and heat of these impacts would likely destroy a substantial amount of the original organic material, meaning we’d see much lower concentrations on the surface.

The other explanation, that of in-situ generation, is also problematic. Organic material has only been identified in small patches on Ceres’ northern hemisphere — and, if the team’s findings are correct, in high concentrations. It’s a lot of organic material spread over a very small area, and we have no idea how it could get like this.

“If the organics are made on Ceres, then you likely still need a mechanism to concentrate it in these specific locations or at least to preserve it in these spots,” said Ralph Milliken, a study co-author.

“It’s not clear what that mechanism might be. Ceres is clearly a fascinating object, and understanding the story and origin of organics in these spots and elsewhere on Ceres will likely require future missions that can analyze or return samples.”

It’s not all unanswered questions. The research will help improve our ability to analyze the chemical make-up of extraterrestrial bodies. The team hopes their findings will “provide a framework of how to better interpret data of asteroids and make links between spacecraft observations and samples in our meteorite collection.”

With NASA announcing that it discovered organic material on Mars just one week ago, it seems that the universe may be a much more organic place than we’d assumed.

The paper “New Constraints on the Abundance and Composition of Organic Matter on Ceres” has been published in the journal Geophysical Research Letters.