It’s a match made in heaven: boy loves girl, they roam the world searching for and studying insects. Now, some 60 years later, they’ve decided to donate their incredibly rich collection to further advance science. 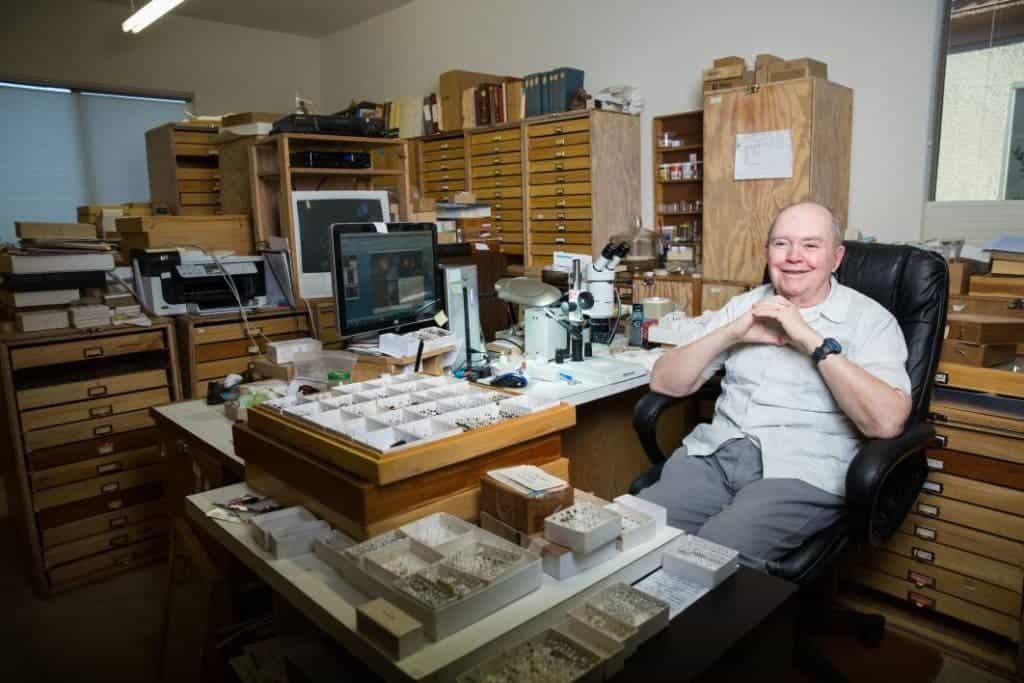 Charlie O’Brien in his home office. The couple has spent decades traveling the world to study insects, which they now store in their home-made collection.
Photo by Deanna Dent/ASU Now

Lois and Charlie O’Brien are two retired entomologists who own one of the world’s most impressive insect collections — over ten million specimens, including more than a million weevils, known for almost destroying the cotton industry 100 years ago, and 250,000 planthoppers, the colorfully camouflaged bug that Lois prefers. Just look at how lovely she describes them: 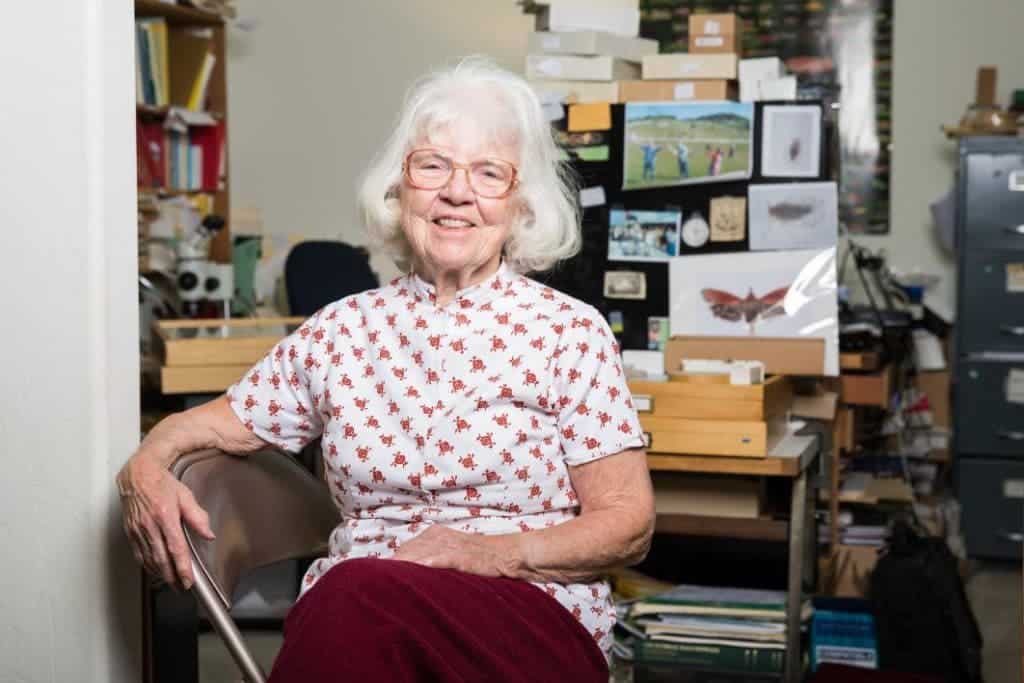 When Lois O’Brien met her future husband, she had a master’s degree in chemistry and was working part-time in the entomology department at the University of Arizona while she pursued a teaching degree. The entomology classes were so fascinating that she decided to switch fields.
Photo by Deanna Dent/ASU Now

But stinging neighbors aside, this collection can be a blessing for researchers. Aside from being a massive collection, some specimens are actually extremely impressive and have not been researched thoroughly. There are perhaps thousands of new species to science in their collection, which is now donated to Arizona State University. 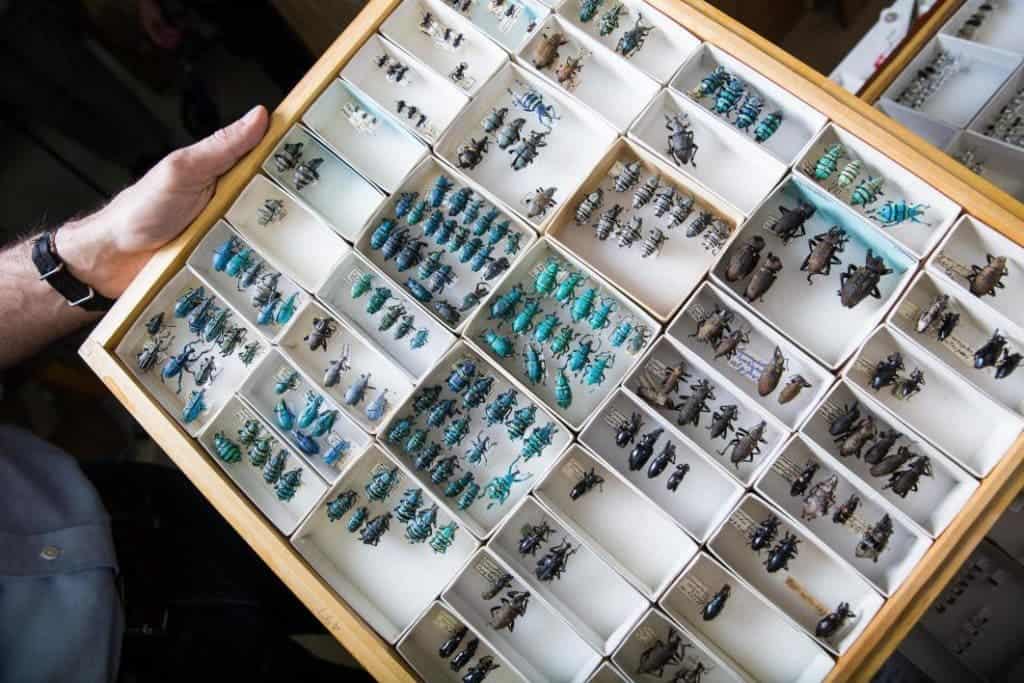 The couple’s collection is one of the largest and most important private collections in the world.
Photo by Deanna Dent/ASU Now

“The specimens have a large reach in terms of their scientific visibility and ultimately their scientific impact for both research and mentoring, and that’s at the heart of what the O’Briens were looking for,” Nico Franz, an expert on the weevil and a long-time colleague of Charlie O’Brien said.

Charlie himself discovered and described hundreds of new weevil species, several of which have been named in his honor. He said they selected Arizona State University due to their upward trajectory in research funding and strong entomological base, which boasts an insect collection with almost 1 million specimens. The fact that Nico Franz, the curator of this collection, is good friends with Charlie likely also influenced the decision. 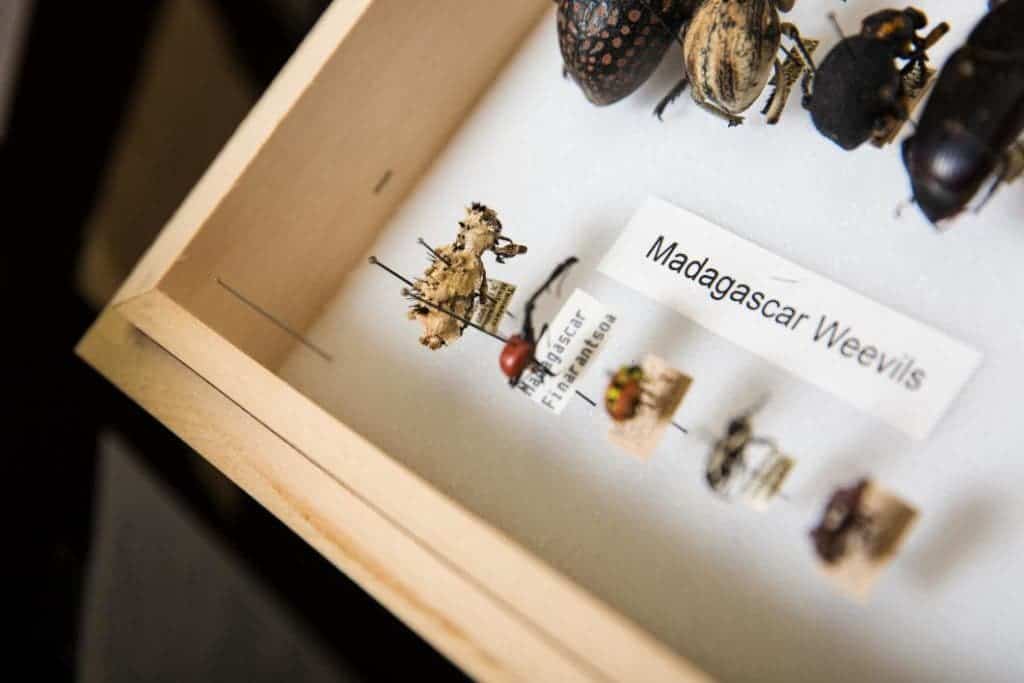 The weevils in the collection come in all colors and sizes, from all over the world.
Photo by Deanna Dent/ASU Now

Every specimen of the collection is worth $5 to $300, and the entire collection is estimated at $10 million, which is a massive donation — when you consider that the O’Briens also donated $2 million to help advance entomology research, the gesture becomes even more impressive.

“One of their unique features,” Franz said of the O’Briens, “is the combination of having amassed something of such great value and at the same time, sharing it so selflessly and widely.”

This is a life’s work they are donating. They used to work for 14 hours a day, seven days a week, traveling the world in search for new insects. Then they would spend months and months studying, classifying, and describing them. Now, they still work seven days a week, but mostly at home — pinning specimens in front of the TV.

Ants are absolutely fascinating creatures. Not only have they discovered farming and animal husbandry thousands of years before us (sometimes even using bacteria to grow gardens), they also conduct executions for the good of the colony, follow Fermat’s principle of least time, and as it has been shown now, draft parasite ants as mercenaries.

Just like medieval cities sometimes recruited expensive contingents of mercenary soldiers to ward off invaders, farmer ants sometimes recruit parasite warrior ants to fight for them, as it is neatly illustrated by this video.

Entomologists investigated a type of ants called Sericomyrmex, which raise fungus in gardens. They are what you would call farmer ants, living on peacefully in their day to day activities. But they have a problem with a type of parasitic ants named Megalomyrmex. These species has cunning queens which stealthily enter and colonize the gardens of Sericomyrmex and can feed on their offspring and their fungus for years before they are detected and stopped. They even cut off the wings of the virgin queens of Sericomyrmex, thus halting the spread of further colonies.

Evolutionary biologist Rachelle Adams at the University of Copenhagen has studied this stunning phenomena for over 10 years; she noticed that at some point, these parasites can make up to 80 percent of the entire colony, which doesn’t really seem to make any sense.

“This prompted me to question why this might be, leading me to focus my collecting efforts on this particular system,” Adams said.

So she put ants to the test: she took the farmer ants and exposed them to another common threat to them: Gnamptogenys. This is also a type of parasitic ant, but they’re way more threatening: they come, pillage the fungus gardens and destroy everything. However, when exposed to this threat, while the farmer ants went into hiding, the Megalomyrmex rose up and fought the invaders off – and then it hit her! Sometimes, they are not truly parasitic, but instead, are fed and tolerated in order to protect the colony.

“The guest ants are the better of two evils,” Adams explained. “If the raiders were not a threat, then the guest ants would only be a burden to the host colony.”

Indeed, this theory was confirmed by further research – she noticed that invaders only attack colonies without ‘mercenaries’.

“If we studied just the farming ants and the guest ants, we would have missed this important discovery and concluded the guest ants are simply parasites,” Adams said. The researchers compared this tradeoff to sickle cell anemia, a hereditary blood disease that can cut lives short but also gives people resistance against malaria.

The research team also highlighted that Megalomyrmex conducts a type of chemical warfare.

“The raider ants attacked by the Megalomyrmex were often attacked by their own nest mates,” Adams said. “This suggests that the guest ant venom disrupts the recognition system of the raiders, causing sisters to attack and kill one another.”

This just goes to show that relationship between ants, and likely other insect species are simply far more complex than we have judged them so far. We should keep in mind that every additional interaction brings an entirely new complexity and should change the way we perceive the situation.

The scientists detailed their findings online Monday in the journal Proceedings of the National Academy of Sciences.

While browsing reddit the other day, I came across a most peculiar finding. One of the users, Decapod73 or Tony Alexander in real life, posted photos he took while on an expedition in the Peruvian Amazon forest of intricate structures that bear an uncanny resemblance to a white picket circular fence – right in the center, half of a cocoon lays proud and mighty. The architect of this intricate and … rather creepy structure is most likely an insect of some kind, the exact species responsible for it however has yet to be identified despite the best efforts of biologists from renowned universities all over the world.

Alexander, a graduate student at Georgia Tech, stumbled onto the fascinating structure attached to tree trunks, including a blue tarp that appeared to have been built by a spider or insect. Initially, he thought this was the work of an ermine moth caterpillar that had started making a cocoon but then got distracted.Eventually, more of these ‘things’ starting popping out and it soon became clear than this was no accident. The repeating pattern found in separate instances proved this.

His thread on reddit has garnered a slew of responses and attention, eventually from renowned entomologists from across the world. To their best knowledge, they failed to identify an insect with a similar behavior or structural pattern. In all likelihood, this is a whole new species, considering estimates have millions of animal and plant species still to be discovered in the world.