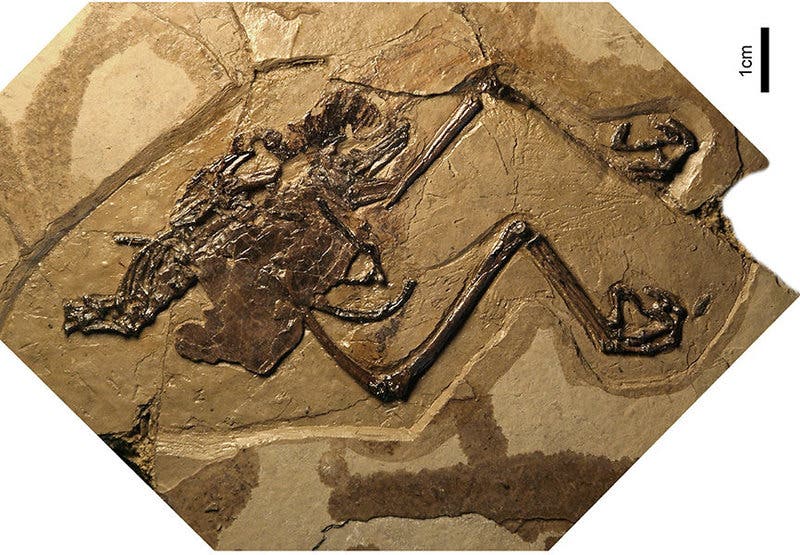 Photograph of the holotype of Avimaia schweitzerae. Credit: Barbara Marrs.

A crushed, pancake-like fossil unearthed in northwestern China contains both a bird and its unlaid egg. The fossil also features a medullary bone — a special type of tissue which serves as a readily available store of calcium for the eggshell. This is the first time scientists have found such a bone and an egg together in the same fossil. Ironically, the authors say that the egg is what seems to have killed the mother.

Insight into the reproductive life of ancient birds

The new species, called Avimaia schweitzerae, belongs to a family of ancient birds known as Enantiornithes, which lived alongside their dinosaur cousins for more than 100 million years. Enantiornithine birds were widely distributed across the globe, with remains found in Argentina, North America, Mexico, Mongolia, Australia, Spain, and China. Paleontologists take a special interest in enantiornithines because the species includes both specialized and primitive features, suggesting they represent an evolutionary side branch of early avian evolution.

Paleontologists at the Institute of Vertebrate Paleontology and Paleoanthropology of the Chinese Academy of Sciences found bits of eggshell preserved alongside the ancient bird’s fossilized skeleton. These eggshell fragments were detected inside the specimen’s abdomen, showing parts of the egg membrane and cuticle (a protein-covered outer layer that covers the surface of the egg and fills the pores that allow air inside for the growing chick). The researcher also detected small minerals made of calcium phosphate which are typically found among birds who bury their eggs. Previous evidence suggested that Enantiornithes buried their eggs, and these latest findings add more weight to this assumption.

At the same time, this particular eggshell features some unusual characteristics. The shell is too thin and it looks like it had two layers instead of one. This suggests that the mother bird went through egg-binding — when an egg takes longer than usual to pass out of the reproductive tract — and this may have been what ultimately killed her.

The analysis also showed that Avimaia schweitzerae had a reproductive tissue called the medullary bone, making it the only Mesozoic fossil featuring this kind of structure. Previously, scientists had argued that this tissue should to be present in other fossil birds, as well as dinosaurs and pterosaurs, but until now this identification proved ambiguous.

The findings appeared in the journal Nature Communications.