When men have a drink with other men, their smiles become contagious, according to a new study. This might explain why men are much more likely to drink in excess than women – they simply have more fun. 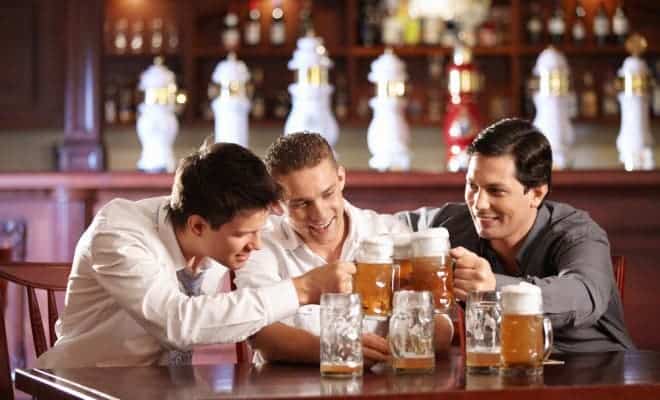 Men have more emotional contagion towards each other when they drink. Image via Trio Media Group

Humans and several others animals experience something called “emotional contagion”. Basically, this means that there are some feelings/expressions which are contagion; if someone smiles to you, you tend to smile back. If someone frowns at you, you tend to frown back. Psychologists believe that this process works in two stages: First of all, there’s the faking. You tend to mirror the reactions of the ones around you. But then there’s the mood changing – if you smile, even if you just mirror the mood of someone around you, you tend to feel better. If someone smiles to you, not only are you likely to smile back, but it will also likely make you feel better (of course, this is just a general behavior which doesn’t apply to all cases). Apparently, this is what happens when men drink alcohol.

Many people use alcohol as a type of social lubricant – to ease you into certain social situations and slightly (or not so slightly) remove your inhibitions. To test this theory, researchers split 720 healthy social drinkers into groups of three — with each one assigned either a vodka cranberry, a non-alcoholic drink, or a placebo drink: a non-alcoholic drink with vodka smell. Researchers wanted to test how the subjects interacted socially. They also looked for genuinely smiles, which are easy to separate from fake ones on camera.

What they found was quite interesting. When alcohol and males were involved, people were much more likely to pick up and mirror smiles. In other words, when they drink, men start to have contagious smiles (mostly to other men). In mixed groups and all-female groups, alcohol didn’t make smiles any more viral than non alcoholic drinks. But the baseline of smile contagion was much higher for women or mixed groups than all male groups – women are much likely to mirror smiles from men or other women.

Researchers warn that the use of alcohol, even in social settings, can be dangerous and lead to addiction (though it is not nearly the same thing as alone habitual drinking). The study also indicates the reason why men seem to enjoy social situations which involve alcohol more than women – they simply enjoy it more.