Taking inspiration from one of nature’s more bizarre creatures, researchers have developed a device that can reach up to 110 volts, powered by nothing else but water-filled gels and biology. This device could pave the way for a new generation of biological implants.

This photo depicts the printed, high voltage implementation of the artificial electric organ. A 3-D bioprinter was used to deposit arrays of gel precursor droplets onto plastic substrates, which were then cured with a UV light to convert them into solid gels. Alternating high-salinity and low-salinity gels (red and blue gels, respectively) were printed onto one substrate, and alternating cation-selective and anion-selective gels (green and yellow gels, respectively) were printed onto a second substrate. When overlaid, these gels connect to form a conductive pathway of 612 tetrameric gel cells that can be used to generate up to 110 volts. Credits: Anirvan Guha and Thomas Schroeder.

The electric eel (Electrophorus electricus) is an electric fish, and despite its name, it’s not really an eel — although it does kind of look like one. The “eel” can produce electrical current through three pairs of abdominal organs, which make up about 80% of its body. It can administer a shock of up to 860 volts and 1 ampere of current (860 watts) for two milliseconds, which it uses to defend itself or to stun prey.

Researchers have long looked towards this ability in an attempt to generate current in biological settings. Let’s say you want a biocompatible power source, to fuel a pacemaker or a sensor, you’re bound to have difficulties when merging the systems.

“Our artificial electric organ has a lot of characteristics that traditional batteries don’t have,” Thomas Schroeder, a chemical engineer at the University of Michigan in Ann Arbor, who co-led the research, told Nature. As well as its desirable physical features, “it isn’t as potentially toxic, and it runs on potentially renewable streams of electrolyte solution”.

The electric eel produces current through cells called electrocytes. Researchers tried to mimic these cells, using four different hydrogels made of polyacrylamide and water. They then stacked over 2,000 of these hydrogels, generating a potential difference — a difference of electrical potential between the top and the bottom.

[alert style=”alert-default” close=”false”]Ions are atoms or molecules with an electric charge due to the loss or gain of one or more electrons. When ions accumulate on either side of a membrane (in this case, the hydrogel) they form an ion gradient, favoring current flow. This can be used to produce a current, which is what the researchers did here. Essentially, the system draws on a biological system’s chemical energy to produce a current.

The more hydrogel layers you stack, the more current you can produce. But it’s not just “more is better” — researchers also want to make the layers thinner, to reduce their resistance, and this is pushing the edges of existing technology. To print the fine layers, the team used a printer that “deposits little droplets of gel … with the precision and spatial resolution to print an array of almost 2,500 gels on a sheet the size of a normal piece of printer paper,” said Anirvan Guha, a graduate student who worked in the project. They also want to increase the current, tens to hundreds of microamperes. So far, their total power output has been between 10 and 100 times lower than that of the eel, not enough to power most devices. However, researchers are optimistic and after all, these are only the early days of this technology. We can certainly expect much more to come in the future.

Having a flexible, transparent, and biocompatible power source could make a big difference for medical implants, and potentially even power up the future’s prosthetics.

The study has been published in Nature, and additional findings will be presented at the Biophysical Society Annual Meeting.

The Electric Eel, a scaleless fish from the Amazon possesses an electroshock system very similar to a Taser. Not only can it stun its prey with the shock, but it can also make it twitch involuntarily, revealing its position. 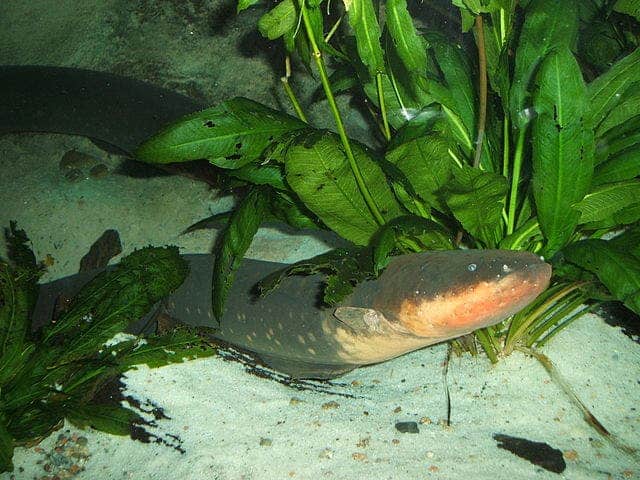 The electric eel can send out bursts of up to 600 volts. Image via Wiki Commons.

The electric eel is able to generate powerful electric shocks of up to 650 volts, which it uses not only for attack and self defense, but also to communicate with others and sense the environment. Researchers have known for a while that they can also generate electricity to immobilize their prey and prevent it from escaping, but a new study conducted by researchers from Vanderbilt University finally explains exactly how this mechanism works; the research also showed that the electric eels can also remote control the minds of their prey, making them twitch and reveal their position through electric shocks. Yep that’s right – even though we’ve known about the eel for a very long time, no one really figured out how they’re able to work their electrical magic – until now.

“It’s really a beautiful piece of work,” says biologist Jason Gallant of Michigan State University in East Lansing, who studies the evolution of electric fish but was not involved in the new research. “These findings were a total surprise to me.”

Professor of Biological Sciences Kenneth Catania first noticed that the eel is very fast – being able to attack and swallow a worm or some other small prey in a tenth of a second. He quickly understood that if he wants to study their actions in detail, he will need some high-speed photography. With this set-up, he also studied their electrical abilities.

Catania recorded three different kinds of electrical discharges from the eels: low voltage discharges used for navigation and environmental sensing, short sequences of two or three high-voltage millisecond pulses (called doublets and triplets) used for hunting and lengthy high voltage, high frequency pulses used for self defense or for capturing the prey. He found that following the hunting zap, the prey is completely immobilized for a short period of time:

“It’s amazing. The eel can totally inactivate its prey in just three milliseconds. The fish are completely paralyzed,” said Catania.

Naturally, these initial observations led to other questions – and most importantly, how do they do it? Nobody actually figured out how the electric eel can stun its target.

“I have some friends in law enforcement, so I was familiar with how a Taser works,” said Catania. “And I was struck by the similarity between the eel’s volley and a Taser discharge. A Taser delivers 19 high-voltage pulses per second while the electric eel produces 400 pulses per second.”

The way the Taser works is pretty simple – it sends strong bursts of electricity to the muscles, overriding the nerves controlling the muscles and making them contract – exactly the way the eel does it. With that question answered, a single mystery remained.

The electric eel is a nocturnal animal, yet it has pretty bad eye sight; how then does it detect its prey? Catania had a pretty good hunch, and set out to test it. As it turns out, his hunch was correct – the fish sends out a very specific electric signal which produces a very rapid contraction in the muscles of its prey. This gives away the position of the prey, basically through remote control.

“Normally, you or I or any other animal can’t cause all of the muscles in our body to contract at the same time. However, that is just what the eel can cause with this signal,” Catania said.

It’s still not clear how the eel evolved this way… but this remarkable creature definitely has some unique weapons in its arsenal.

“If you take a step back and think about it, what the eel can do is extremely remarkable,” said Catania. “It can use its electrical system to take remote control of its prey’s body. If a fish is hiding nearby, the eel can force it to twitch, giving away its location, and if the eel is ready to capture a fish, it can paralyze its muscles so it can’t escape.”