American and Australian researchers have figured out how to unboil a hen egg, devising a method that unfolds tangled proteins. The process could prove to be extremely valuable in the biotech industry; costs could be dramatically cut for cancer treatments, food production and other research. So, is unboil a word now?

If you ever cooked an egg, you know that it’s made out of egg white and yolk. Egg whites are a low-calorie, fat-free food. They contain the bulk of the egg’s protein, while the yolks carry the cholesterol, the fat and saturated fat of the egg, but also important nutrients like essential fatty acids. When the whites are cooked, the proteins start to unfold under the thermal pressure, then fold again into a new tighter, more tangled structure – from clear and slimy, to white and gummy.

Researchers at the University of California, Irvine, and Flinders University in Australia now report a novel process that pulls apart these newly tangled proteins, allowing them to refold to their original structure. The team boiled eggs for 20 minutes at 194 degrees Fahrenheit then added urea to untangle the knotted proteins into liquid proteins known as lysozymes. Yes, urea is one of the main ingredients found in urine. I don’t know about you, but this unboiled egg doesn’t sound safe to eat again. The liquid was then  processed in a  machine called a vortex fluidic device, developed by Colin Raston and his colleagues at Flinders University in Australia, which causes the tangled protein molecules to shear and refold normally.

“It’s not so much that we’re interested in processing the eggs; that’s just demonstrating how powerful this process is. The real problem is there are lots of cases of gummy proteins that you spend way too much time scraping off your test tubes, and you want some means of recovering that material,” said Gregory Weiss, a professor of chemistry and molecular biology and biochemistry at the University of California, Irvine.

Of course, there are other methods already available that untagle proteins, but these take days to process, while the “unboiled egg” method only takes a few minutes. Since it’s speeding the process up by a factor of thousands, the $160 billion biotech industry could save a great deal of money, which should translate in savings for consumers. According to Science Alert: “pharmaceutical companies commonly produce cancer antibodies for treatment using hamster ovary cells, which are expensive, but valuable, as they don’t often misfold proteins. The same goes for industrial cheese makers and farmers who need these kinds of proteins to drive the fermentation process. Using this new technique, scientists could instead use proteins extracted super-cheaply from yeast and E. coli bacteria and restore them to a useable form.”

“I can’t predict how much money it will save, but I can this will save a ton of time, and time is money,” said Weiss.

The findings were published in the journal ChemBioChem.

They say that when two people fall in love, you can see sparks flying. Well, that may or may not be true, but researchers from the US have shown that when sperm meets and egg – sparks definitely fly.

A combined imaging approach was used to identify and characterise zinc-enriched packages in a mouse egg. Image courtesy from Northwestern University.

These are the first images captured at the exact moment when a mammal’s egg is fertilized, showing that in response, the egg releases billions of zinc atoms that create tiny ‘zinc sparks’ at the point of conception.

Northwestern University scientists had a hunch that this might be the case, so in order to prove their theory, they invented a a new fluorescent sensor that is able to track the movements of zinc in live cells. This allowed them to make a number of interesting findings, including an unprecedented view of an egg’s zinc-storage capabilities. The egg features some 8,000 zinc compartments, each one containing around one million zinc atoms; when it’s fertilized, it releases all those atoms in a firework-like display which lasts up to two hours.

The finding could lead to improved In Vitro Fertilization (IVF) results, showing which eggs have the highest quality.

“The amount of zinc released by an egg could be a great marker for identifying a high-quality fertilised egg, something we can’t do now,” said one of the team, ovarian biology expert, Teresa Woodruff, in the release. “If we can identify the best eggs, fewer embryos would need to be transferred during fertility treatments. Our findings will help move us toward this goal.” 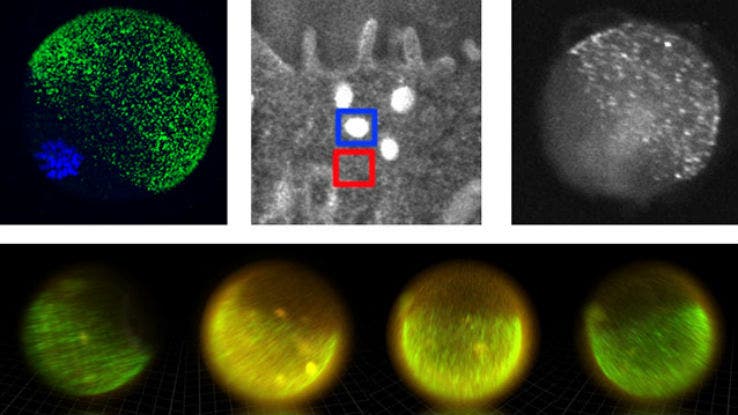 Release of thousands of these packages results in the striking event called the zinc spark that is a hallmark of fertilization in mammals. In the images shown, bright fluorescent signal coming from the egg is a result of the release of groups of zinc-rich packages from the egg to form a zinc spark. Image courtesy of Northwesteern University.

The team used high-energy X-Ray visualizing techniques to see where the zinc atoms are at any given moment.

“On cue, at the time of fertilisation, we see the egg release thousands of packages, each dumping a million zinc atoms, and then it’s quiet. Then there is another burst of zinc release,” said co-author, Thomas O’Halloran, in the release. “Each egg has four or five of these periodic sparks. It is beautiful to see, orchestrated much like a symphony. We knew zinc was released by the egg in huge amounts, but we had no idea how the egg did this.”

Of course, this begs the question – why does the egg eliminate so much zinc? Well, zinc has a lot to do with the egg’s decision to grow into an embryo. This is a very complex process, but as fertilization occurs and the egg “decides” it will grow into an embryo, it eliminates the zinc.

“The egg first has to stockpile zinc and then must release some of the zinc to successfully navigate maturation, fertilization and the start of embryogenesis,” said O’Halloran. “But exactly how much zinc is involved in this remarkable process and where is it in the cell? We needed data to better understand the molecular mechanisms at work as an egg becomes a new organism.”

The study, which was published in the journal Nature Chemistry, provides the first quantitative physical measurements of zinc localization in single cells in a mammal. The researchers are now working to see if they can somehow correlate zinc sparks to egg quality, but this study also lays the basis for understanding how zinc fluxes can regulate events in multiple biological systems beyond the egg, including neurotransmission from zinc-enriched neurons in the brain and insulin-release in the pancreas.