More than 80 people were hospitalized after inhaling noxious fumes after a pipeline failure caused some 600,000 gallons of oil to spill into a nature reserve in the desert near Eilat, a southern Israel city. The city with a population of about 50,000 people was not directly affected, however local fauna and flora was severely damaged, according to Guy Samet, the director of the southern region for the Environmental Protection Ministry. It might take years for the spill to be cleaned, and much longer for the local vegetation and wildlife to recover.

One of Israel’s direst ecological situation 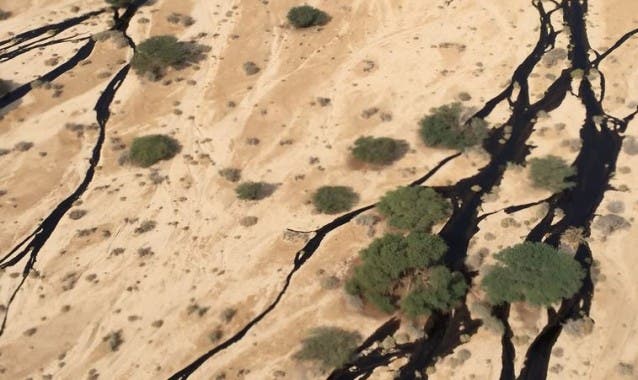 The Evrona Nature Reserve crisscrossed by a black river of hydrocarbon oil, as seen in this aerial taken by the Israel’s Environmental Protection Ministry.

“This is one of the State of Israel’s most serious pollution events,” Samet told Israel Radio. “We are still having trouble gauging the full extent of the contamination.”

The spill was caused by a breach in the 153-mile long Trans-Israel pipeline, a major oil conduit between the Mediterranean and Red seas that runs from Eilat to Ashkelon. It’s not clear year what caused the spill. The only information we have yet comes from officials at the Eilat Ashkelon Pipeline Company who claim the breach was likely due to a “maintenance failure” at a new section of the pipeline. 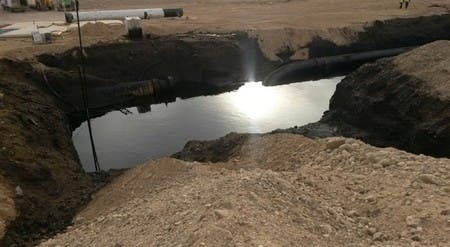 The spill was caused by a breach in the Trans-Israel pipeline on December 4, 2014. (photo credit: Courtesy Eilat Fire Department).

Israel’s Environment Ministry will task its “Green Police” with forming a special team to investigate the matter and determine the cause of the spill. It’s still far too early to count the damage, but considering a huge 4.3 mile river of oil was released out into the open things must not look pretty. The hydrocarbon river is currently making its way toward the Jordanian river, like a menacing lava flow following a volcanic eruption. In Jordan, already some 80 people have been hospitalized after reporting breathing difficulties due to hydrogen sulfide in the air. Three Israelis were also hospitalized after inhaling the toxic fumes, according to Think Progress. 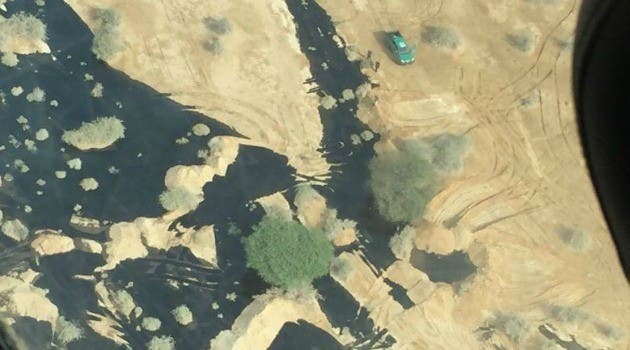 Firefighters and environmental groups scrambled to the scene in an attempt to seal the puncture in the pipeline and prevent further contamination. Credit: Getty Images

“We’re talking about thousands of gallons of crude oil, which will endanger local wildlife and the surrounding nature reserve,” he said, adding that rehabilitation could take “years.”

Another day another oil spill: “Oil Spill in Israel ‘Will Take Months, if Not Years’ to Clean” http://t.co/2WrTARDQnR pic.twitter.com/87gE4NlmpQ

The Evrona Nature Reserve was hit the hardest by the spill. It’s one of the most important reserves in the Arava desert home to indigenous flora and fauna, including rare acacia trees and over 280 deer, said Doron Nissim, director of the Nature and Parks Authority’s Eilat chapter.

“From what we currently know, there is extensive pollution. Tomorrow we will perform an analysis of the damage and then we’ll have a clearer picture,” he said.

Even if the spill was gone tomorrow, Israel is far from short of environmental problems. The biggest challenge the country faces is its growing water shortage. Since the mid-1970s, demand for water has at times outstripped supply, a situation that seems to mirror that of California today. Israel is a semi-arid country where no rain falls for at least six months a year. According to a report submitted to the Israeli Water Commission in December 2000, Israel’s main water sources are expected to continue to decline, endangering drinking water quality, and raising the specter that it will soon not be possible to supply sufficient drinking water.