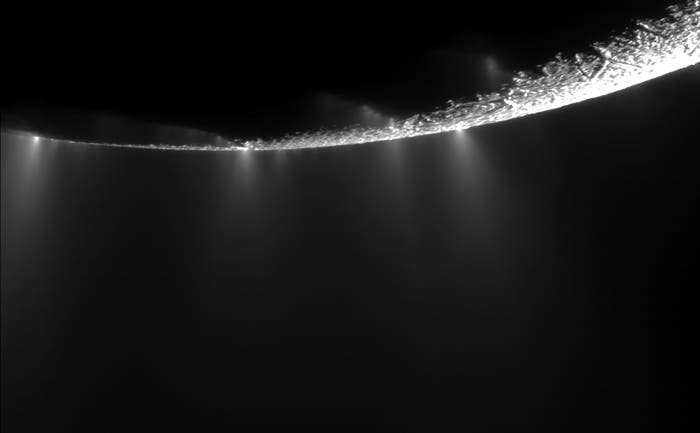 Plumes springing from Enceladus' surface spray water ice out from many locations along the “tiger stripes” near the moon's south pole. (c) NASA/JPL/SSI

Launched in 1997 on a mission to study Saturn and its satellites, the Casisni spacecraft reached the system in 2004. Since then it has provided numerous invaluable scientific findings regarding the second largest planet in our solar system, and other important scientific findings alike. One such finding was detailed in a recently published study, which speculate with strong backed up scientific evidence that there may actually be a subterranean liquid saltwater ocean under Saturn’s moon Enceladus.

Just one of Saturn’s 19 known moons, Enceladus has always been an impressive sight for both eyes and science. The potentially remarkable lead came after icy spray ejected from “tiger stripe” surface fractures at the moon’s south pole, were analyzed by Cassini’s  Cosmic Dust Analyser, or CDA. The device measured the composition of freshly ejected plume grains, which hit the probe at speeds of up to 11 miles per second, which lead to their vaporization. The constituents of the resulting vapor clouds were then separated and broken down by the CDA for researchers to analyze.

It is believed that the plume grains are responsible for the formation of Saturn’s E-ring, it’s outmost ring. The interesting part comes around here though; what researchers found was that ice grains found further out from Enceladus were very small and poor in ice, closely matching the composition of the E Ring. Remarkably, when going closer towards the moon, the Cassini observations indicate that relatively large, salt-rich grains dominate.

“There currently is no plausible way to produce a steady outflow of salt-rich grains from solid ice across all the tiger stripes other than the salt water under Enceladus’ icy surface,” says Frank Postberg of the University of Germany, lead author of a study published in Nature this month.

These salt-rich particles are considered to have an “ocean-like” composition that indicates most, if not all, of the expelled ice comes from the evaporation of liquid salt water rather than from the icy surface of the moon, researchers say.

“The study indicates that ‘salt-poor’ particles are being ejected from the underground ocean through cracks in the moon at a much higher speed than the larger, salt-rich particles,” says study co-author Sascha Kempf of the Laboratory for Atmospheric and Space Physics at the University of Colorado-Boulder.

You may be wondering how come this icy-salt gets blown out into space – this comes as a result of the slow freeze process of salt water. As such, the salt is spilled out, leaving pure water ice behind. Researchers argue that there could be a salty ocean under Enceladus’ surface since if the plumes would have came from up above, on the surface, the registered salt levels shouldn’t have been as high as it has been measured.

“The E Ring is made up predominately of such salt-poor grains, although we discovered that 99 percent of the mass of the particles ejected by the plumes was made up of salt-rich grains, which was an unexpected finding,” says Kempf. “Since the salt-rich particles were ejected at a lower speed than the salt-poor particles, they fell back onto the moon’s icy surface rather than making it to the E Ring.”

Based on this assumptions and subsequent computations, researchers  believe that perhaps 50 miles beneath the surface crust of Enceladus lies a thick layer of water somewhere between its rocky core and the icy mantle. The latter is is kept in a liquid state by gravitationally driven tidal forces created by Saturn and several neighboring moons, as well as by heat generated by radioactive decay.

“This study implies that nearly all of the matter in the Enceladus plumes originates from a saltwater ocean that has a very large evaporating surface,” says Kempf.

“Enceladus is a tiny, icy moon located in a region of the outer Solar System where no liquid water was expected to exist because of its large distance from the sun,” says Nicolas Altobelli, European Space Agency’s project scientist for the Cassini-Huygens mission. “This finding is therefore a crucial new piece of evidence showing that environmental conditions favorable to the emergence of life may be sustainable on icy bodies orbiting gas giant planets.”

The study comes right on the heels of another similar remarkable find which also speculated on the presence of an ocean of water on another of Saturn’s moons, this time on Titan.