The US Food and Drug Administration (FDA) has approved Tembexa (brincidofovir) to treat smallpox. This is the second approved smallpox drug; the first, TPOXX (tecovirimat), was approved in 2018.

TPOXX’s effectiveness against smallpox was established by studies conducted in animals infected with viruses that are closely related to the virus that causes smallpox, and was based on measuring survival at the end of the studies. More animals treated with TPOXX lived compared to the animals treated with placebo. TPOXX was approved under the FDA’s Animal Rule, which allows efficacy findings from adequate and well-controlled animal studies to support an FDA approval when it is not feasible or ethical to conduct efficacy trials in humans.

Smallpox, an acute contagious disease caused by the variola virus, was one of the most devastating diseases known to humanity and caused millions of deaths before it was eradicated. It is believed to have existed for at least 3,000 years.

The smallpox vaccine, created by Edward Jenner in 1796, was the first successful vaccine to be developed. He observed that milkmaids who previously had caught cowpox did not catch smallpox and showed that a similar inoculation could be used to prevent smallpox in other people.

The World Health Organization (WHO) launched an intensified plan to eradicate smallpox in 1967. Widespread immunization and surveillance were conducted around the world for several years. The last known natural case was in Somalia in 1977. The WHO declared smallpox eradicated in 1980, but since then many nations have expressed concerns that the variola virus, which causes smallpox, could be used as a bioweapon.

Similar to TPOXX, the FDA also approved Tembexa under its Animal Rule. Human safety data on Tembexa was based on clinical trials involving primarily patients who were treated with the drug after they received hematopoietic stem cell transplants.

The first anti-viral drug for Coronavirus disease 2019 (COVID–19), also known as 2019-nCoV acute respiratory disease, has been approved for marketing by the National Medical Products Administration since the outbreak. Developed by Zhejiang Hisun Pharmaceutical Company, the drug is expected to play an important role in preventing and treating the outbreak which has now infected 70,553 in China (1,772 deaths), the government said on its official WeChat account.

COVID-19, is an infectious disease caused by SARS-CoV-2 (2019 novel coronavirus), a virus closely related to the SARS virus. The disease was discovered during, and is the cause of, the 2019–20 coronavirus outbreak.

Three potential anti-COVID19 medicines have been officially announced by the Ministry of Science and Technology: Favilavir, Chloroquine Phosphate, and Remdesivir. They all initially showed more obvious curative effects and lower adverse reactions in clinical trials.

Favilavir, formerly known as Fapilavir, an antiviral that has shown efficacy in treating the novel coronavirus, was approved for marketing, the Taizhou government in Zhejiang province announced Sunday.

It is the first anti-novel coronavirus drug that has been approved for marketing by the National Medical Products Administration since the outbreak. Developed by Zhejiang Hisun Pharmaceutical Company, the drug is expected to play an important role in preventing and treating the epidemic, the government said on its official WeChat account.

Chloroquine Phosphate is in a class of drugs called antimalarials and amebicides. It is used to prevent and treat malaria. It is also used to treat amebiasis.

The other one with the most potential – so far – has been Remdesivir, which Gilead had already been developing as a treatment for Ebola disease and Marbug virus infections. It has subsequently also been found to show antiviral activity against other single-stranded RNA viruses such as respiratory syncytial virus, Junin virus, Lassa fever virus, Nipah virus, Hendra virus, and coronaviruses (including MERS and SARS viruses).

Based on success against other coronavirus infections, Gilead provided Remdesivir to physicians that treated an American patient in Snohomish County, Washington infected with 2019-nCoV, and is providing the compound to China, to conduct a pair of trials in infected individuals with and without severe symptoms.

Chinese pharma BrightGene has successfully developed and manufactured copies of the drug, it has also maintained that it will not launch the drug until it has received licensing from Gilead, conducted clinical trials and obtained approval. A study of Remdesivir in COVID-19 has already begun enrolling patients in China, with a Gilead spokesman confirming that two clinical trials will be conducted in Wuhan, the city where the first cases of the novel coronavirus were observed.

The R&D and pre-marketing approval cost of a typical pharmaceutical drug sits at around $2.6 billion, according to a new study by the Tufts Center for the Study of Drug Development. The study used actual expense data provided by 10 pharmaceutical companies on 106 randomly selected drugs that were first tested in human subjects anywhere in the world from 1995 to 2007. She findings show that drug development costs have increased by %140 (inflation corrected) since the last estimates were made by the same center in 2003. 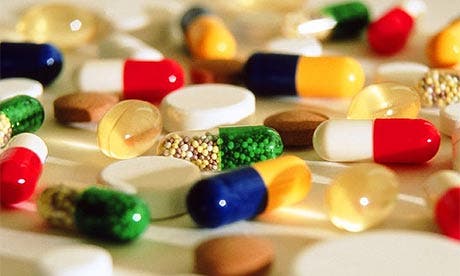 Since the 1970s, R&D efforts by pharmaceutical companies have gone up a couple of notches, but so have the costs. While there have been a lot of developments that helped increase efficiency, these savings have been offset by things like increased complexity of clinical trials, a greater focus on chronic and degenerative diseases and new kinds of regulation that require testing against other drugs.

The analysis reveals that during the ten years typically required for a drug to complete its R&D phase and enter pre-marketing evaluation, pharmaceutical companies need to cash-out  $2,558 million per approved compound. The estimation includes:

In addition, post-approval R&D (such as tests required by the  U.S. Food and Drug Administration to assess safety and long-term side effects in patients) cost $312 million bringing the overall  product lifecycle cost per approved drug to $2,870 million.

“Drug development remains a costly undertaking despite ongoing efforts across the full spectrum of pharmaceutical and biotech companies to rein in growing R&D costs,” said Joseph A. DiMasi, director of economic analysis at Tufts CSDD and principal investigator for the study.

He added, “Because the R&D process is marked by substantial technical risks, with expenditures incurred for many development projects that fail to result in a marketed product, our estimate links the costs of unsuccessful projects to those that are successful in obtaining marketing approval from regulatory authorities.”

There are a lot of reasons why pharmaceuticals cost so much to put out on the market. A ZME feature post details the process and explains why this is the case. The most costly part lies covering the failed products. The same Tufts Center found that only  21.5 percent of drugs that start phase I trials are eventually approved for marketing. 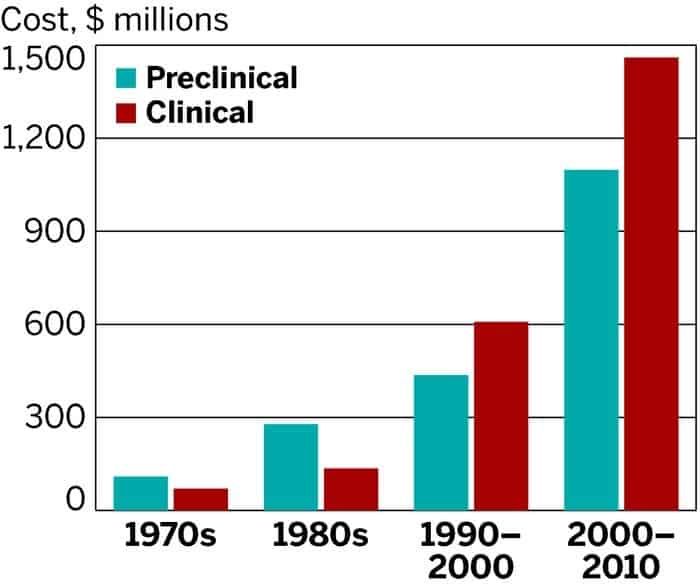 Drug development costs have sky rocketed over the last couple of decades. Image: Tufts Center for the Study of Drug Development (CSDD)

Is the study excuse enough for companies to start rising prices or justify overpriced products already on the market? There’s been a widespread fury against pharma pricing in the past couple of year, particularly in the US where a patient needs to pay $100,000 per year for a typical cancer treatment. Time and time again, lobbyists and representatives have stepped forward to explain that the pricing reflects the cost of developing them, which is very expensive and takes a long period of time, and the value that it can provide.