Ahh, the cave, cradle of humanity since time immemorial. Early humans sought them for shelter, plastered their walls with paintings, made them into the first temples. And even after we’ve moved out, they still captivate and terrify us — unknown, but somehow familiar.

Without caves, our life might have been very different now. So how did they come about? How does a cave form? Well, in a lot of different ways, really. Caves come in different sizes and shapes, and the way they’re created depends on the type of cave. Most often, they form when water dissolves limestone, but they can also be shaped by waves, even lava.

So don your hardhats and pull your learning pants on, because I’m going to tell you all about:

The Types of Caves 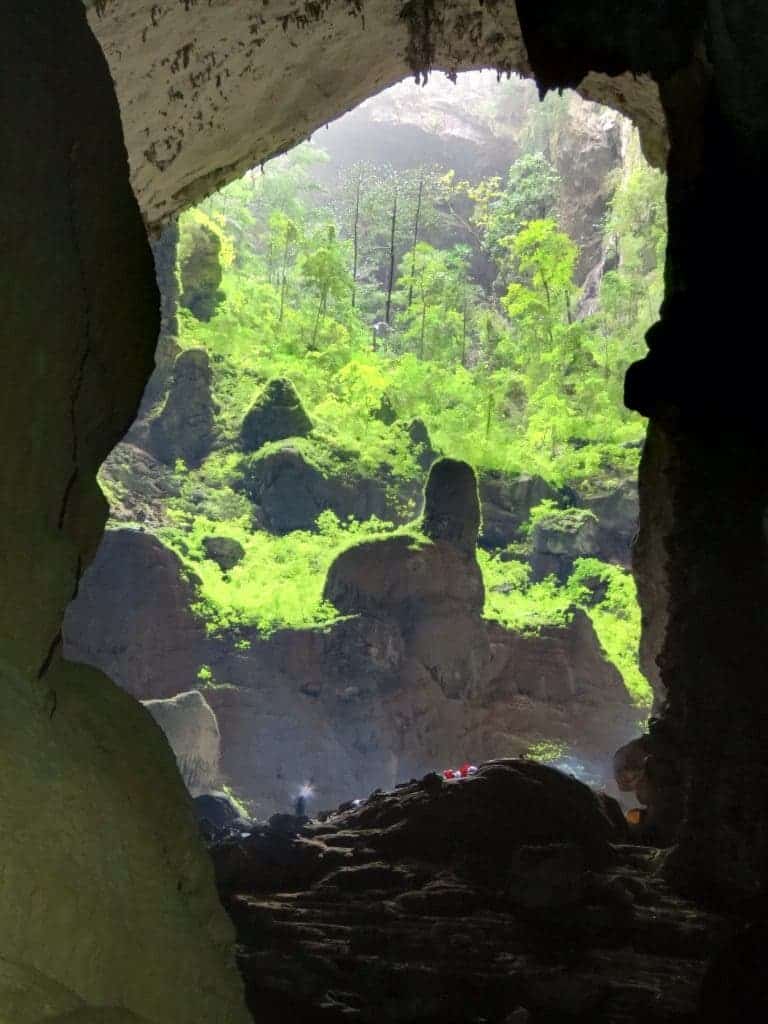 Son Doong Cave in Vietnam, the largest cave ever found, is a solutional cave. It’s big enough to have its own ecosystem.
Image credits Doug Knuth

These are the structures people most readily associate with the idea of a cave, and for good reason. They’re the most numerous, the largest and most often-encountered structures. If you’ve ever been spelunking or seen a cave in a movie chances are it was a solutional cave. The secret to their abundance is two-fold: for starters, the rocks that house them are found throughout the globe, and the chemical elements required to shape them are abundant. As Andrei wrote:

“Solutional caves are generally formed in limestone or other similar rock such as gypsum or dolomite. They form when acidic water dissolves the rock, seeping through the bedding planes.”

Let’s consider a geological environment of soil over a bedrock of limestone, as solutional caves are most frequently found in this type of rock. Limestone is a carbonatic rock, formed over millions of years from the remains of coral, zooplankton, shells or bones, all mashed up together. This material gets bunched up and subjected to huge pressure, fusing into solid rock.

The main mineral found in limestone is calcium carbonate, or CaCO3, a mixture of calcium and carbon trioxide, an unstable compound. While limestone is pretty resilient and nice to look at, it tends to be relatively brittle and fractures a lot due to tectonic stress. Its chemical makeup also makes it susceptible to attack by acids which break up the calcium carbonate into calcium compounds (Ca + the non-metal that forms the acid), carbon dioxide (CO2), and water (H2O). 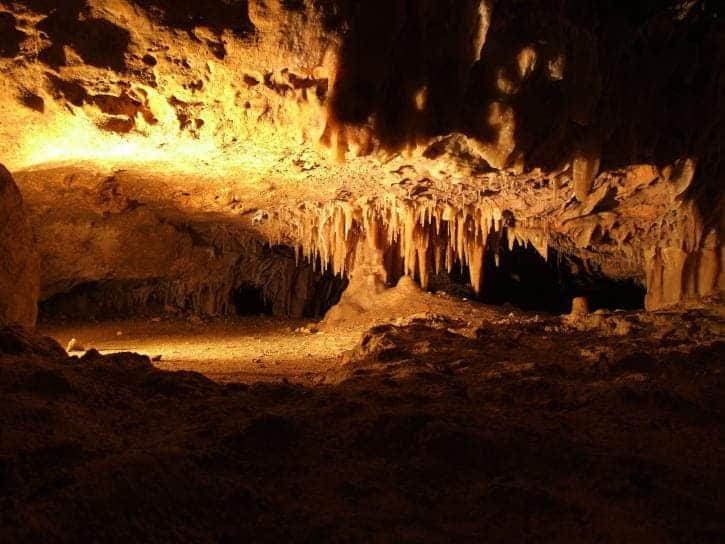 [panel style=”panel-info” title=”Fun geology fact” footer=””]Rubbing a diluted solution of acid onto a geological sample is still the easiest way to determine if there are any carbonatic compounds in the rock. If so, the solution will bubble and foam quite vigorously.[/panel]

These conditions work together to make limestone an ideal place for cave formation. In nature water invariably becomes acidic by mixing with carbon dioxide molecules (H2O+CO2=H2CO3) forming a solution of carbonic acid. Part of this can happen in the atmosphere as rain pours down, but most of the mixing takes place in the soil which is rich in CO2 left over from decaying organic matter.

This solution trickles down through the soil and cracks in the limestone until it reaches the water table. Here it starts to eat through the rock, forming channels. In an almost cruel twist of geological fate, while limestone dissolves it releases the exact components needed to make more carbonatic acid. This chain reaction and the extra acids that seep in from the surface keep expanding the cavern until the water table level drops. If this happens, water with dissolved calcium compounds will trickle down to the new area of dissolution, forming stalactites and stalagmites. 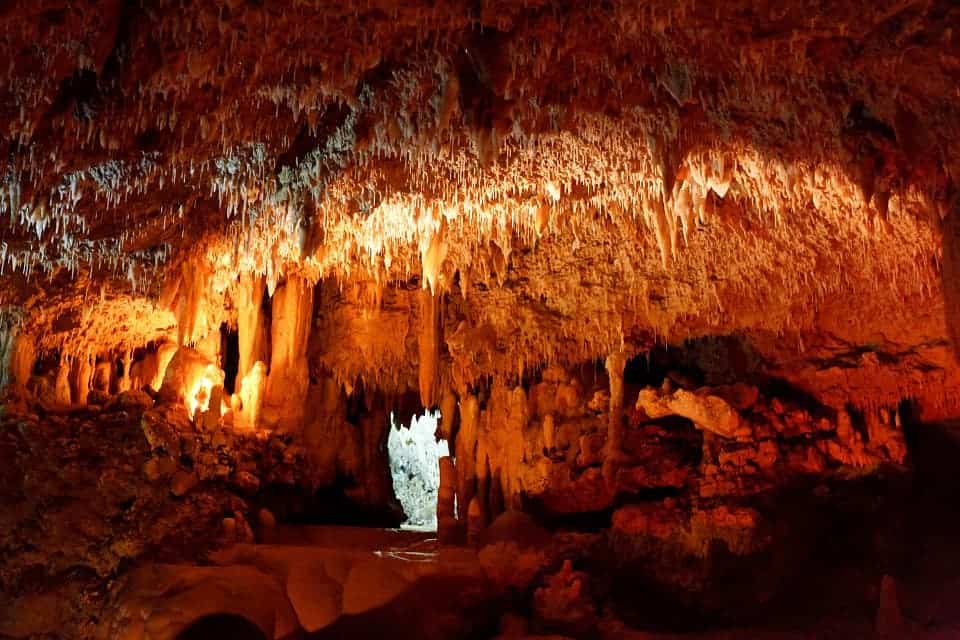 And looking awesome.
Image via pixabay

If on the other hand water remains mobile throughout dissolution, the caves take on the appearance of an underground drainage system, a landscape known as karst. 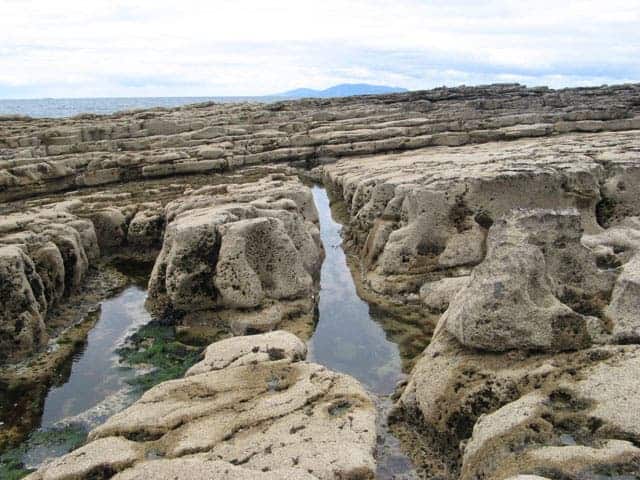 Something like this, but underground.
Image credits Jonathan Wilkins

It takes a few million years for a solutional cave to form.

While dissolution caves are formed by hollowing out preexistent packets of rock, lava caves form at the same time as the geological environment around them — and so, they’re considered to be primary caves. They’re centered around areas of volcanic activity and resemble huge underground rock pipes. 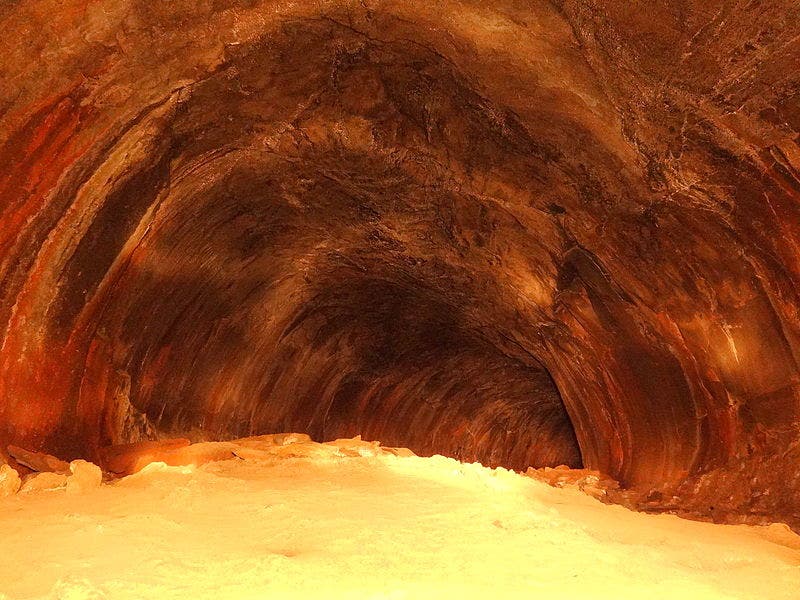 And in a way, that’s just what they are. Molten rock that reaches the surface (called lava) can form sprawling cave networks while it flows down the path of least resistance. The material is very hot initially, but as the outer layer of lava starts to cool it solidifies into a shell of rock. This process insulates the lava within and starts at the base of the flow (because the rock it’s pouring over is a better thermal conductor than air,) forming a through-like structure through which the hot lava at the center keeps on flowing. Over time, material clings to the edges of this through and solidifies, eventually closing into a pipe-like structure.

Because this shell of rock is solidified from a flowing material its inner walls are neat, almost polished, with horizontal conduits on the inner side that channel the flow. Once the lava supply starts to dwindle the cave cools down and thermal constriction starts fragmenting the walls. The pressure of volcanic gasses in the cave, however, support the roof from collapsing. As these gasses mix with air from vents in the roof resulting oxidation processes sometimes generate enough heat to re-fuse the ceiling, solidifying it. Sometimes, this process can lead to the formation of stalactites as molten material drips from the ceiling. 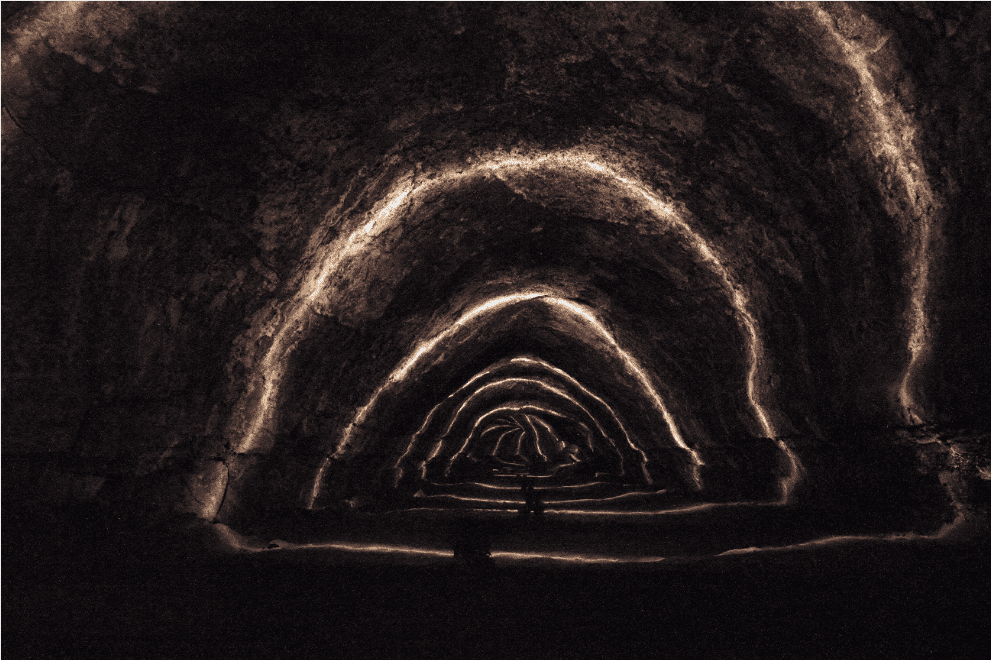 Long exposure picture of a lava tube near Bend, Oregon. The lighting is artificial.
Image courtesy of Michael Harms.

These structures are called lava tubes, and it’s important to note that they form on the surface and are later covered with sediments. They often have lava streams solidified along their floors. The most common access points into these caves are areas with collapsed ceiling.

Similar processes form inflationary caves or vertical conduits underground, which can be big enough to qualify as caves. The former are areas where lava pushed on neighboring rock then receded, leaving domes of solid rock behind. The latter are formed in areas where lava escaped to the surface.

Erosion is the process by which soil or rock is removed from their original structures by surface factors. Dissolution can be viewed as a particular case of erosion, but we’ve already talked about those.

Sea caves are also formed by water. But, while dissolution caves get hollowed out through chemical reactions, sea caves are constructed by wave-powered erosion, either above or below the waterline. They can be found on the shoreline, as the name implies, but also inland, in areas that were once close to the sea but have since dried up — in parts of Norway, for example. They can form in all types of rock: igneous, metamorphic or sedimentary. 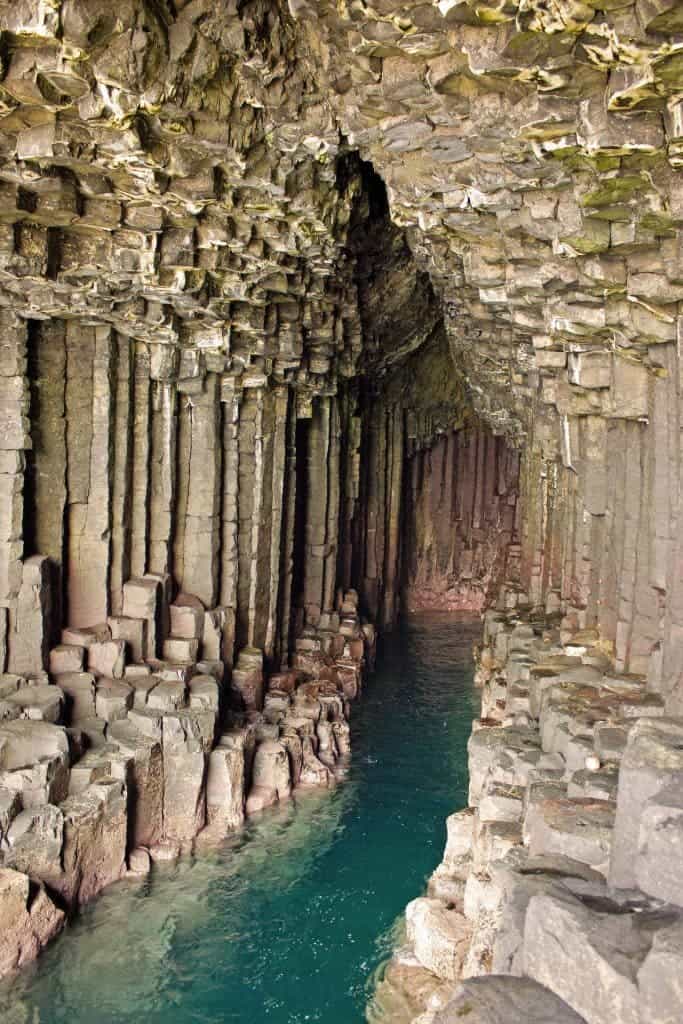 This Minecrafty beauty is named Fingal’s Cave, Scotland. It is a sea cave formed through basalt pillars.
Image via reddit user narwalmart

Waves form these structures by sheer attrition, throughout millions of years of battering with particle-rich water. As such, they tend to form in weaker areas of the rock, such as fault lines in igneous or metamorphic rocks or bedding plane contacts in sedimentary rocks. Once waves open a fissure through the rocks, the process becomes much faster — confined to a narrower space, the water and suspended particles exert more pressure on the walls and pressurize the gasses within, acting like a wedge.

Their walls are usually chunky and jagged, as erosion breaks off irregular slabs of rock from them. Some sea caves, however, have circular shapes with smooth walls and are filled with pebbles. This is caused by the waves taking on a circular motion inside the caves as they wash in and out, grinding the pebbles against the walls and smoothing them down. 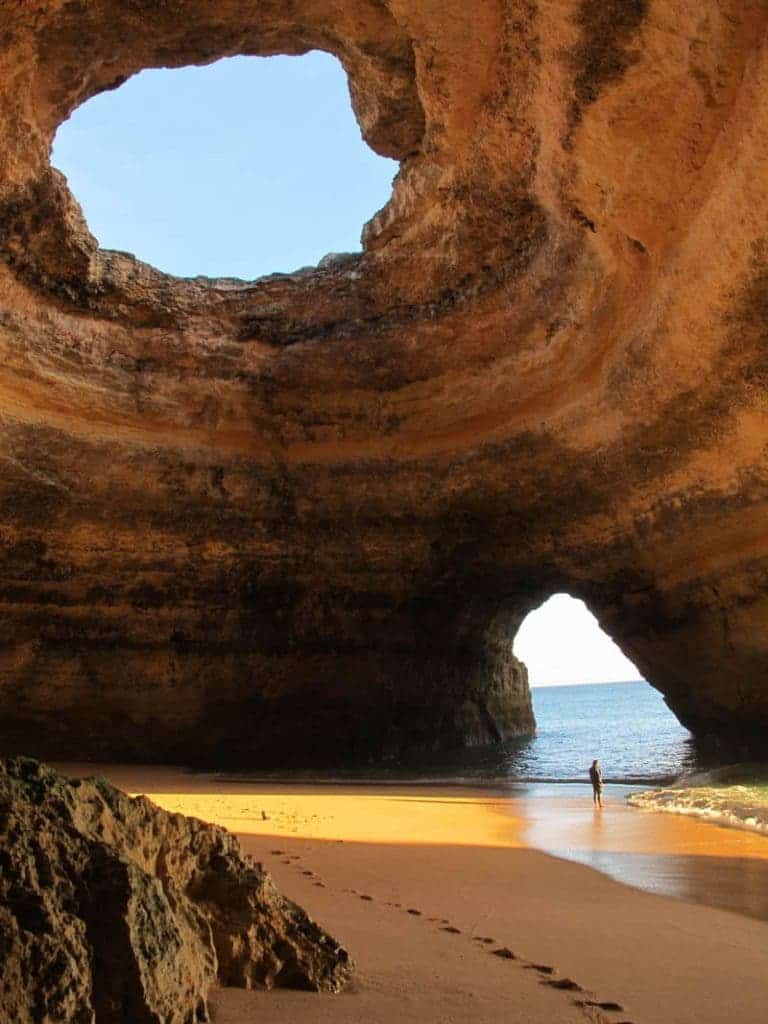 Such as this beautiful cave in the Algarve region, Portugal.
Image via Imgur

Because erosion is a continuous process, removing rock bit by bit, sea caves are prone to collapse, leaving behind a “littoral sinkhole.”

There are many other kinds of caves, each one with its own story to tell. Each one tells of how an area’s geology interacts with the world above it, being shaped by it over countless centuries. But, the paintings our ancestors adorned them with, the lines of sooth they burned into their walls stand testament to how they can, in turn, shape the world around them.