Mouth microbes may be connected to a variety of illnesses, more and more studies are showing.

Dental care has been disconnected from general health care for many years now, but the more you start to think about it, the stranger it seems. After all, you don’t really separate any other branch of medicine so… why teeth? It all started in the 19th century, following conflicts between surgeons and dentists in England. The conflict was carried on in the United States, after medicine became linked to employer insurance and Medicare. The fissure between medicine and dentistry widened, until it was irreparable. Medicine was split into dental care and all the rest… and has remained so to this day. But is it really fair to exclude dental care from the rest of health care?

When Salomon Amar, a periodontal specialist at Boston University, began exploring links between oral bacteria and heart disease in animal studies in the late 1990s, reactions were unfriendly. Skepticism, in all its forms, was the general response – why would a dentist become involved in heart disease studies? But Amar was’t alone. Wenche Borgnakke, a dental researcher at the University of Michigan in Ann Arbor, has been making the same case for years, pointing to several published studies. Especially, a study published last year in the journal Medicine highlights that patients on dialysis who received periodontal treatment had an almost 30 percent lower risk of pneumonia and hospitalization from infections. Furthermore, a recent study found that gum problems is associated with a 10% higher mortality.

The scale seems to be tipping the other way, as more and more physicians are noticing connections between oral hygiene and general health. Says Jean Wactawski-Wende, a cancer epidemiologist at the State University of New York at Buffalo:

“The more I work on oral health and cancer, the more I think, ‘Oh my gosh, I’ve got to keep my teeth clean.’ ”

Plaque seems to one of the main culprits, and that makes a lot of sense – after all, it’s a thick layer of bacteria inside your mouth.

“If you do not brush your teeth, it will sit there and accumulate. As that plaque gets thicker and thicker, there is less and less oxygen in the deepest layers,” Borgnakke says. Safely sheltered, the innermost plaque starts to favor anaerobic bacteria, which, when they escape into the blood, can survive in the oxygen-starved nooks and crannies deep inside the body.

While many questions still remain, and the relationship between gum health and overall health remains an open question, there is growing evidence that you gums can open the body to a swarm of infections. The science is not yet clear on it, but in the mean time, it’s better to be safe and sorry. Clean your gums, you may be helping your entire body. 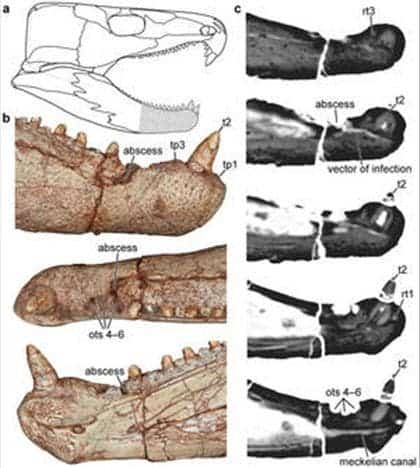 Paleontologists turned into dentists after an examination of the fossilized jaw of a reptile from the Paleozoic era revealed what’s considered to be the world’s oldest tootache.

Dated back 275 million years ago, the Oklahoma found Labidosaurus hamatus must have had some serious issues with its sugar tooth, as researchers  observed missing teeth and  eroded bones in its jaw, which poissed them to dwell a bit further. Led by Robert Reisz, the chair of the Department of Biology at the University of Toronto Mississauga, scientists decided to investigate further with a CT-scan – they  soon found evidence of a major infection that had caused the loss of several teeth and a massive abscess.

“Not only does this fossil extend our understanding of dental disease, it reveals the advantages and disadvantages that certain creatures faced as their teeth evolved to feed on both meat and plants,” said lead researcher Robert Reisz. “In this case, as with humans, it may have increased their susceptibility to oral infections.”

What apparently happened, researchers conclude, is that the reptile lost a tooth, which consequently became a hole, and through that hole a heck load of bacteria flooded and extended itself to other adjacent healthy teeth. This is exactly what Reisz was pointing out, since it shows how important evolution influenced this particular case. Because the Labidosaurus’ diet was plant based, ergo a lot of chewing was involved, it gradually evolved from the primivitive dental setup in which teeth were loosely attached to the jaws and continuously replaced (see sharks) to teeth that were strongly attached to the jaw, with little or no tooth replacement.

The downside to this, however, is pretty evident as outlined, which in way explains why humans are also very susceptible to dental infections if a parallel is to be made.

“Our findings suggest that our own human system of having just two sets of teeth, baby and permanent, although of obvious advantage because of its ability to chew and process many different types of food, is more susceptible to infection than that of our distant ancestors that had a continuous cycle of tooth replacement,” Reisz said.

The study is detailed online in the journal Naturwissenschaften — The Science of Nature.