A study that followed more than a million pregnancies in Finland found that elevated levels of a DDT (dichloro-diphenyl-trichloroethane) metabolite in the blood of pregnant women are associated with an increased risk for autism in newborns. DDT is an insecticide that was widely used around the world, including the United States, until it was banned.

DDT is one of the first modern synthetic insecticides — an organochlorine that was first synthesized in 1874. It soon proved to be highly effective for insect control in crop and livestock productions, but also around private homes and gardens. It also showed remarkable success in controlling malaria, typhus, and the other insect-borne human diseases. Through its use, the number of soldiers dying from malaria dropped from 400,000 in 1946 to less than 10 in 1950.

But insects quickly developed resistance, and people started spraying the environment with increased amounts of DDT to compensate.

Scientists would learn, however, that DDT provoked many long-lasting adverse effects on the environment and wildlife. In 1972, the EPA issued a cancellation order for DDT based on its adverse environmental effects, including potential human health risks.  Today, DDT is classified as a probable human carcinogen by U.S. and international authorities following animal studies that linked the insecticide to liver tumors. A 2014 study also found that British people with the highest levels of the chemical in their system were four times more likely to develop Alzheimer’s.

One of the many environmental issues associated with DDT is that it persists for a very long time. Although it was banned more than three decades ago in Finland, people are still exposed to the chemical because it’s still in the soil where food is grown. Because chemicals can be transferred across the placenta, newborns also become contaminated with DDT.

In 2011, a study found that pregnant women exposed to the insecticide are much more likely to give birth prematurely, or to full-term but low birth weight babies. Now, researchers at Columbia University linked autism in offspring with DDT exposure in pregnant women.

The research team analyzed a dataset comprising a million pregnant Finnish women whose children were born between 1987 and 2005. Researchers identified 778 cases of childhood autism. Mothers with DDE levels — a metabolite of DDT —  in the top quartile were twice as likely to birth children with autism that have an intellectual disability than those in the bottom quartile. Overall, the rate of autism was one-third higher among offspring exposed to elevated levels of maternal DDE, the authors reported in the American Journal of Psychiatry.

“Unfortunately, they are still present in the environment and are in our blood and tissues. In pregnant women, they are passed along to the developing fetus. Along with genetic and other environmental factors, our findings suggest that prenatal exposure to the DDT toxin may be a trigger for autism.”

The researchers found no significant association between PCBs — another class of banned environmental pollutants — and autism.

One reason why maternal DDE exposure may increase the risk of autism in newborns is that the metabolite is associated with low birth weight, while PCB is not. Previously, a study on rats found that DDE inhibits androgen receptor binding, which might cause autism in the rat model. In contrast, PCBs increases androgen receptor transcription.

DDT is still manufactured and used to this day in some countries. However, it’s not employed for agricultural purposes. Some countries in Africa, Asia, and South America need the pesticide for mosquito control in order to reduce the risk of malaria. 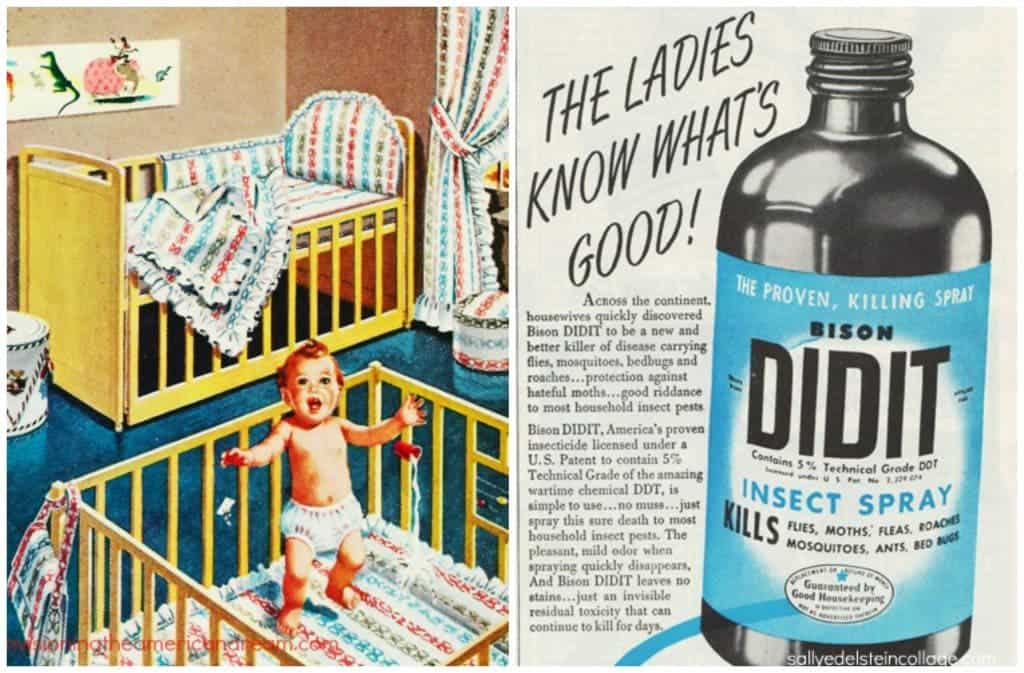 Yes, they do know what’s good – NOT DDT. Image via Envisioning the American Dream.

DDT has been formulated in almost every conceivable form, including solutions in xylene or petroleum distillates, emulsifiable concentrates, water-wettable powders, granules, aerosols, smoke candles and charges for vaporizers and lotions. First synthesized in 1874, DDT’s insecticidal action was discovered by the Swiss chemist Paul Hermann Müller in 1939. It was used for decades to control malaria, and then, as a pesticide. As early as the 1940s, scientists in the U.S. had begun expressing concern over possible hazards associated with DDT, and in the 1950s the government began tightening some of the regulations governing its use. The US banned in in 1972, but the substance is still used extensively in Asia and Africa.

“Environmental chemicals have long been suspected causes of breast cancer, but until now, there have been few human studies to support this idea,” said Barbara Cohn of the Public Health Institute in Berkeley, California, co-author of the study published Tuesday in the Journal of Clinical Endocrinology and Metabolism.

Although DDT is considered a probable carcinogen, it’s the first time a direct connection was observed between it and cancer.

“This 54-year study is the first to provide direct evidence that chemical exposures for pregnant women may have lifelong consequences for their daughters’ breast cancer risk.”

The researchers studied data from a California program called Child Health and Development Studies, which studied 20,754 pregnancies from 1969 to 1967. During that time, DDT was still used and accumulated in foods like milk or butter.

Also, by examining the levels of DDT in the mother’s blood, doctors were able to determine with startling accuracy which of the daughters would develop breast cancer later in life. When you consider that billions of people are still exposed to this chemical substance, the implications become evident – we need to find a way to phase DDT out of use.

“Our findings should prompt additional clinical and laboratory studies that can lead to prevention, early detection and treatment of DDT-associated breast cancer in the many generations of women who were exposed in the womb,” the research concludes.