A new study focusing on the Greenland Ice Sheet found that the rate of ice loss has accelerated over the past few years, confirming previous measurements. To put it into perspective, the sheet is now losing some 110 million Olympic-size swimming pools of water every year. 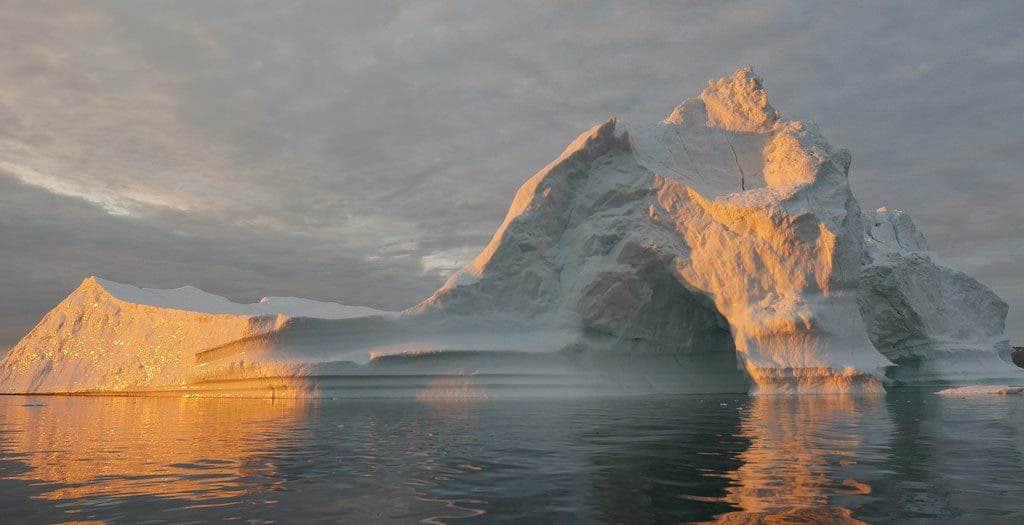 One direct consequence of all the greenhouse gases we’re emitting into the atmosphere is melting ice. Doesn’t sound so dramatic — ice on my front lawn melts every spring, there’s ice-covered lakes and ice-bergs that sometimes melt and a little water never hurt anybody, right? For those things, yes. It’s a small quantity of ice, and it’s already floating on bodies of water so it won’t affect the volume of the world’s oceans if it melts.

But our planet has one huge deposit of water that doesn’t take part in the liquid’s natural cycle — ice sheets. When these melt, the water finds its way into the ocean and raises the sea level of the world’s oceans. So knowing how melting happens every year is important not only to help us quantify our activity’s effect on climate, but also because it helps us estimate how much sea levels rise.

However, you can’t simply hammer a tap into the ice and measure how much water flows out. What we can do is measure the volume of ice. This requires high-precision measurements of the ice sheets’ sizes over a long period of time to yield reliable results. In a new study, an international team reports the findings of one such high-precision measurement of the Greenland Ice Sheet, and their results confirm previous estimates of its rate of melting.

Malcolm McMillan from the Centre for Polar Observation and Modeling and his colleagues mapped the ice-sheet with incredibly high resolution (5 km distances,) by using data from the CryoSat 2 satellite. It relies on a technique called radar altimetry to measure terrain height, and with it the team was able to track the behavior of Greenland’s ice sheets with more precision than ever before.

In theory, if an ice sheet gains in altitude, it means that it’s also gaining in volume, so there’s more ice. A drop in altitude would correspond to a thinning of the ice caused by melting. But the processes that create the sheets are a little more complex — the Greenland sheets are thousands of meters thick, but the top layers are made up of snow and firn which gradually compress into solid ice. Accounting for the constitution of the sheet thus becomes very important in determining how much water gets trapped or released into the ocean.

After accounting for changes in density, surface roughness, and water content the authors found how much ice Greenland is losing, and how this melt varies by location and time. For example, 2012 saw a huge amount of ice loss compared to other years. The western side of the ice sheet is also melting much faster than the eastern side. The team found that a small part of the ice sheet (less than 1% of the sheet) is responsible for more than 10% of the mass loss. 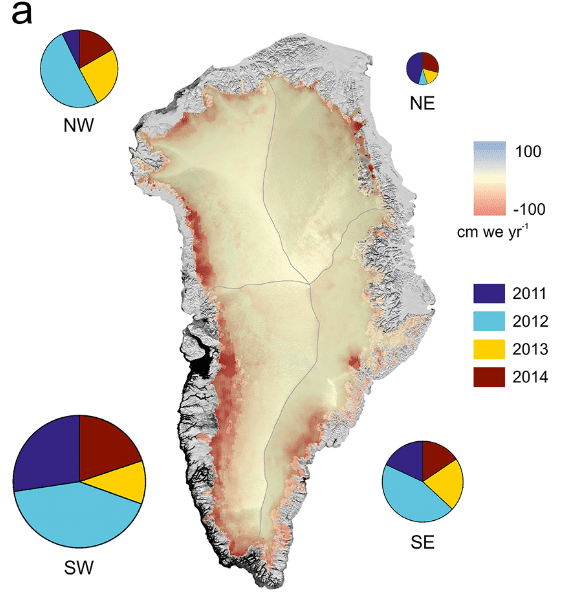 Rate of mass change between January 2011 and December 2014 from CryoSat-2 radar altimetry. The color wheel indicates ice mass lost each year, with the radius scaled according to the magnitude of the total losses. The boundaries between the four sectors are shown in gray.
Image credits Malcolm MacMillan et. al, 2016.

They estimate that between 2011 and 2014, some 270 gigatons of ice have melted away from Greenland — that’s enough water to fill 110 million Olympic swimming pools each year. This matches other independent measurements almost perfectly, helping to confirm the numbers.

“Using high resolution satellite data from ESA’s CryoSat-2 mission, we have produced a detailed and comprehensive picture of how Greenland has changed in recent years. In particular, we have been able to map the changing ice sheet in fine detail, and pinpoint where, and when, the greatest ice losses have occurred,” McMillan said in an interview for The Guardian.

The measurements allow scientists to calculate how much ice has been lost every year and determine the relationship between mean temperatures and melt — by looking at melt during the record summertime temperatures of 2012, for example. The variations in ice quantity show to what extent Greenland contributes to the sea level rise we’ve seen in recent years. And, thanks to their high resolution, researchers can also highlight which glaciers are experiencing the most melt.

The duration of this study was a relatively short 4 years. Hopefully, the team will continue their measurements in the following years, so we can get a better understanding of how sea levels will evolve in the future.

The full paper, titled “A high-resolution record of Greenland mass balance” has been published online in the journal Geophysical Research Letters.