In order to indicate cultural affiliations, people in Croatia during the 5th or 6th century could have used cranial modifications, according to a study led by Ron Pinhasi of the University of Vienna and Mario Novak of the Institute for Anthropological Research in Zagreb, Croatia.

The Hermanov vinograd archaeological site in Osijek Croatia has been known since the 1800s. A new pit excavated in 2013 contained three human skeletons dated from 415-560 CE, during the Great Migration Period, a time of significant movement and interaction of various European cultures.

Artificial cranial deformation is the practice of modifying the skull from infancy to create a permanently altered shape, often to signify social status. In this study, genetic, isotopic and skeletal analysis of the bodies revealed that all were males between 12 and 16 years of age at death and that they all suffered from malnutrition.

They are not obviously of different social status, but genetic analysis found that the two with cranial modifications exhibited very distinct ancestries, one from the Near East and the other from East Asia. The latter is the first individual from the Migration Period with a majority of East Asian ancestry to be found in Europe.

The ACD observed here may have functioned to distinguish members of different cultural groups as these groups interacted closely during the Migration Period, the authors suggested. From the evidence available, it is unclear if these individuals were associated with Huns, Ostrogoths, or another population.

The cave art, which was first discovered in 2010, has now been shown to be truly figurative. It could be as old as 34,000 years old.

An international team of researchers from Britain, France, Canada, Spain, and Croatia analyzed the cave paintings found in Romualdova Pećina (Romuald’s Cave), Croatia. Radiocarbon dating showed that these works are at least 17,000 years old, but judging by other indirect data (such as the dating of the cave sedimentary layers), the paintings might even date from 34,000 years ago. Further research will be conducted in order to establish the precise age of the rock art. But more important is the nature of these paintings. Although not very visible to the naked eye, digital recordings and image amplification techniques have revealed that the paintings represent a bison, an ibex, and two possible anthropomorphic figures.

These are clearly figurative paintings — depictions derived from real object sources and so is, by definition, representational — an important landmark of cultural evolution. The oldest known figurative art painting is over 40,000 (perhaps as old as 52,000) years old and represents an unknown animal. The dating results were only published one year ago. Meanwhile, the earliest known European figurative cave paintings are those of Chauvet Cave in France. These paintings date to earlier than 30,000 BCE (Upper Paleolithic) according to radiocarbon dating. However, these new findings represent the first such art found in the Balkan area.

“Rock art is key for understanding European Palaeolithic societies. Long thought to have been restricted to South-west Europe, recent discoveries on the Balkan Peninsula have expanded significantly the geographic distribution of Upper Palaeolithic figurative rock art, calling into question the idea of its limited distribution,” researchers write in the study.

Dr. Aitor Ruiz-Redondo, a British Academy-funded Newton International Fellow at the University of Southampton and postdoctoral researcher at the University of Bordeaux, further adds that the paintings offers an important clue to understand how different cultures were developed at the same time.

“The importance of this finding is remarkable and sheds a new light on the understanding of Palaeolithic art in the territory of Croatia and the Balkan Peninsula, as well as its relationship with simultaneous phenomena throughout Europe.”

Further research is currently being carried out at the cave.

A rock found at the Krapina site in Croatia 100 years ago seems to have been taken there by Neanderthals only because it was pretty, with no intention of being used as a tool. 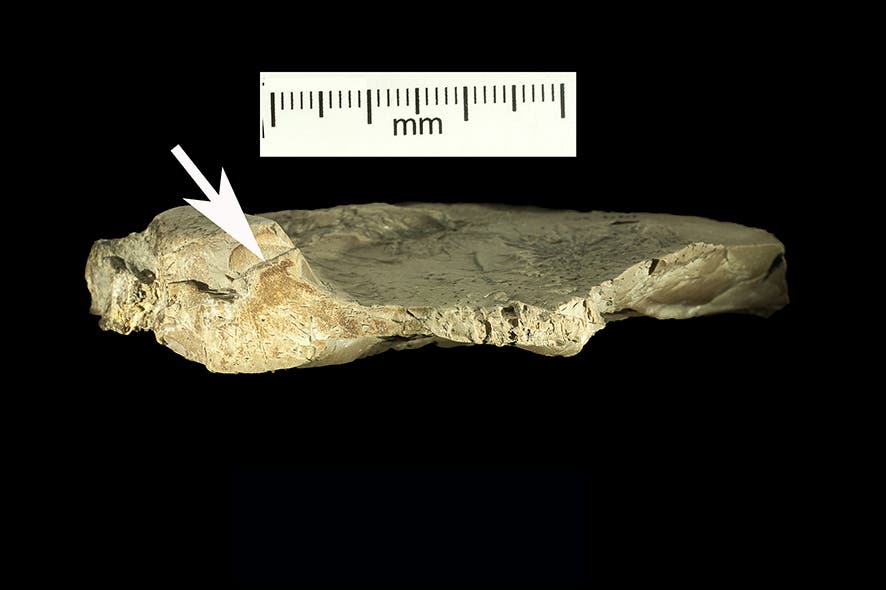 A huge part of science is collecting stuff — data, questioners, images, stuff from caves. Sadly, what often happens is that things get collected, taken to a place such as a lab or museum to be examined, and then simply forgotten.

Sometimes though, research teams go museum-diving, and they make some pretty fantastic finds. An international team of researchers has (re?)discovered a piece of split limestone retrieved from the Krapina site in Croatia and stored in the Croatian Natural History Museum in Zagreb. The site was excavated between 1899-1905 and found to contain Neanderthal bones.

The best part? This piece of limestone wasn’t worked over and would have probably made a horrible tool anyway. Neanderthals couldn’t eat it, or use it in any other way. It simply was a pretty rock.

“If we were walking and picked up this rock, we would have taken it home,” said David Frayer, a professor emeritus of anthropology and corresponding author of the study.

“It is an interesting rock.”

The finding adds to a growing body of evidence showing that Neanderthals weren’t simple brutes. They were able to see simbolic or aesthetic value in objects, not just the “rock big, good for smash” property. Frayer and lead author Davorka Radovčić, curator at the museum, also published a paper in PLOS ONE in 2015 describing a set of eagle talons found at the same site which were fashioned into jewelry.

“People have often defined Neanderthals as being devoid of any kind of aesthetic feelings, and yet we know that at this site they collected eagle talons and they collected this rock. At other sites, researchers have found they collected shells and used pigments on shells,” Frayer said.

“There’s a little bit of evidence out there to suggest that they weren’t the big, dumb creatures that everybody thinks they were.”

Similar to how they found the talons, Frayer credited Radovčić’s keen eye for finding the rock among the items recovered from the site. The cave, he said, was dug in sandstone so the rock obviously was brought from somewhere else. It stands out in over 1,000 stone items recovered from the cave, but the original archaeologists didn’t give it much attention beyond bagging and tagging it. 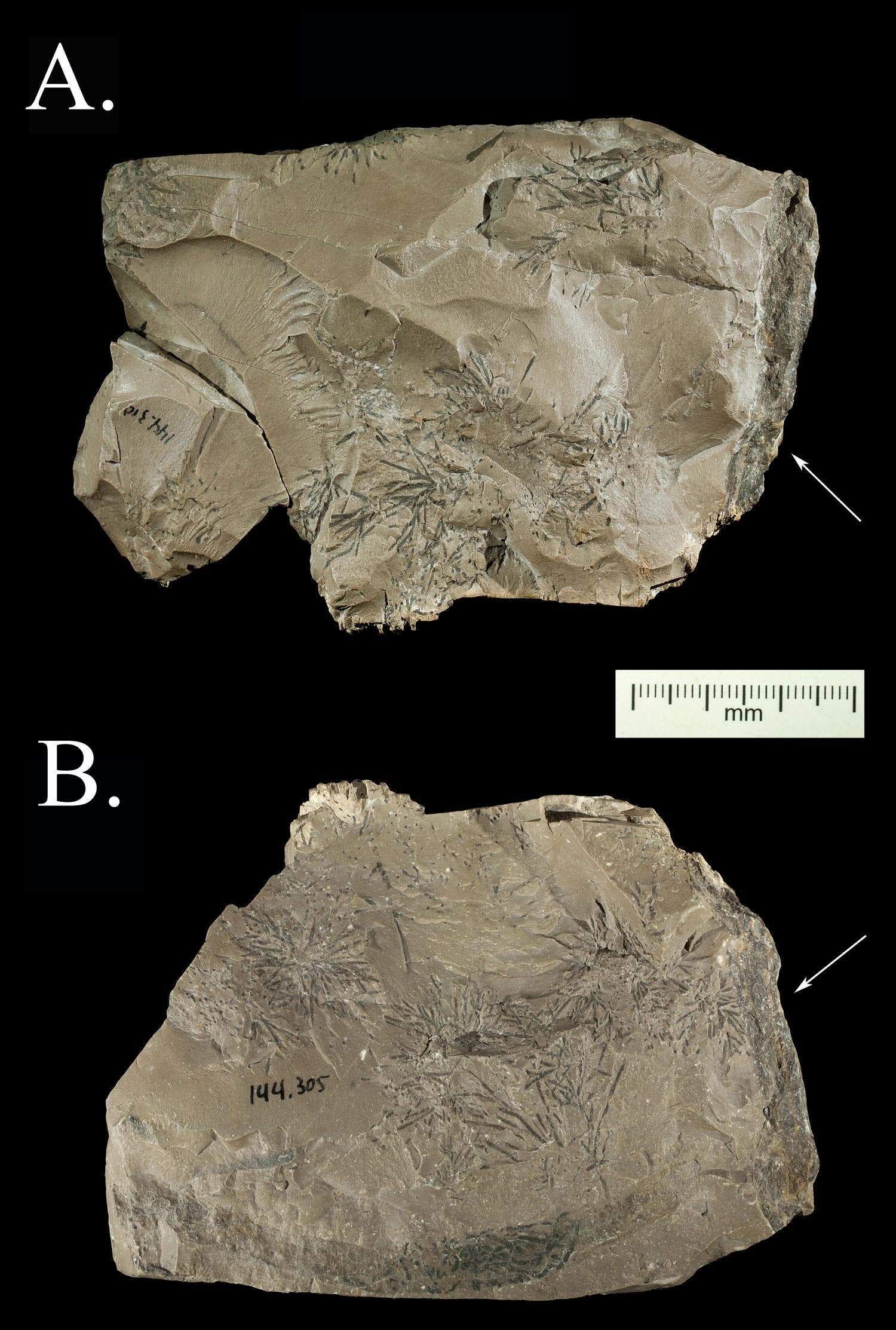 Clam-shell view of the rock with black dendrites. The flake, only shown on Side A, fractured after excavation.
Image credits David Frayer / University of Kansas.

The rock, which measures roughly 5x4x1,5 inches, doesn’t show any striking platforms or other preparation of an edge, so the team suspects it wasn’t meant to be used as a tool. A small flake seems to fit in with the rest of the rock, but the break likely happened after the specimen was recovered

“The fact that it wasn’t modified, to us, it meant that it was brought there for a purpose other than being used as a tool,” Frayer said.

What caught Radovčić’s eye were the inclusions (black lines) that stood out from the brown rock. Its look is probably what made the Neanderthal want to collect it. He or she either carried it a few kilometers to the cave from a local outcrop of biopelmicritic limestone, or found it closer to Krapina — likely transported by a stream.

And yea I get that as far as archaeological findings go, this one is not so dramatic — it’s a stone from the stone age. But personally, I think it’s awesome. I like collecting rocks. Always have. The fact that one Neanderthal a hundred-and-some thousand years ago had the same hobby as me makes them more relatable than a gazillion cave paintings in France ever could.

The full paper was published in the journal Human Palaeontology and Prehistory with what is probably the best scientific paper name I have seen in a long time: “An interesting rock from Krapina”.

Deep below ground level, 3,500 feet (1000 meters) down a Croatian cave, scientists have discovered a new species of centipede. They named this incredibly resilient creature Geophilus hadesi – earth loving Hades – in honor of Hades, the Greek God of the underworld and ruler of Hell. 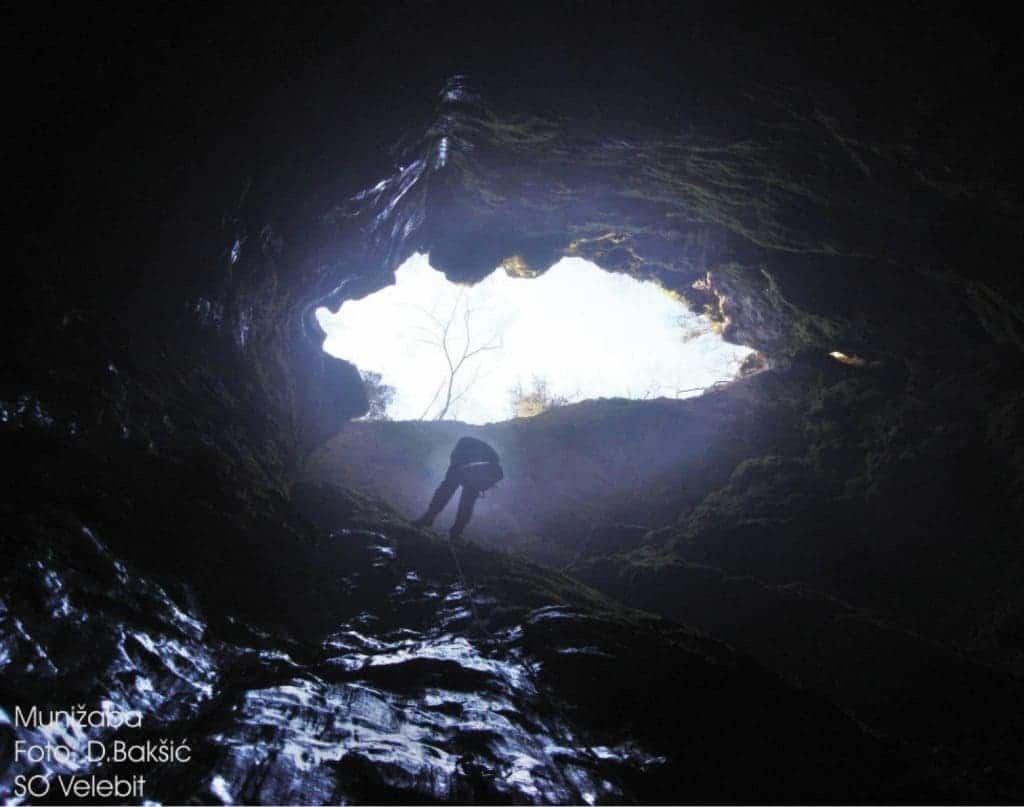 Centipedes are elongated arthropods with one pair of legs per body segment. Despite the name, centipedes can have a varying number of legs from under 20 to over 300. Except for one species having 96 legs (48 pair), centipedes always have an odd number of pairs of legs—for example, 15 or 17 pair (30 or 34 legs), therefore no centipede has exactly 100 legs. They also have long curved claws which they use to grasp their prey and long antennae which help them find the prey in the dark environment in which they live in. However, as their discoverers explain, we don’t know that many details about their lifestyle, or about any cave-dwelling creatures really.

“When I first saw the animal and its striking appearance, I immediately realized that this is a new, hitherto unnamed and highly adapted to cave environment species. This finding comes to prove once again how little we know about the life in caves, where even in the best prospected areas, one can still find incredible animals,” Pavel Stoev, lead author of a study on the newly discovered creatures, said. 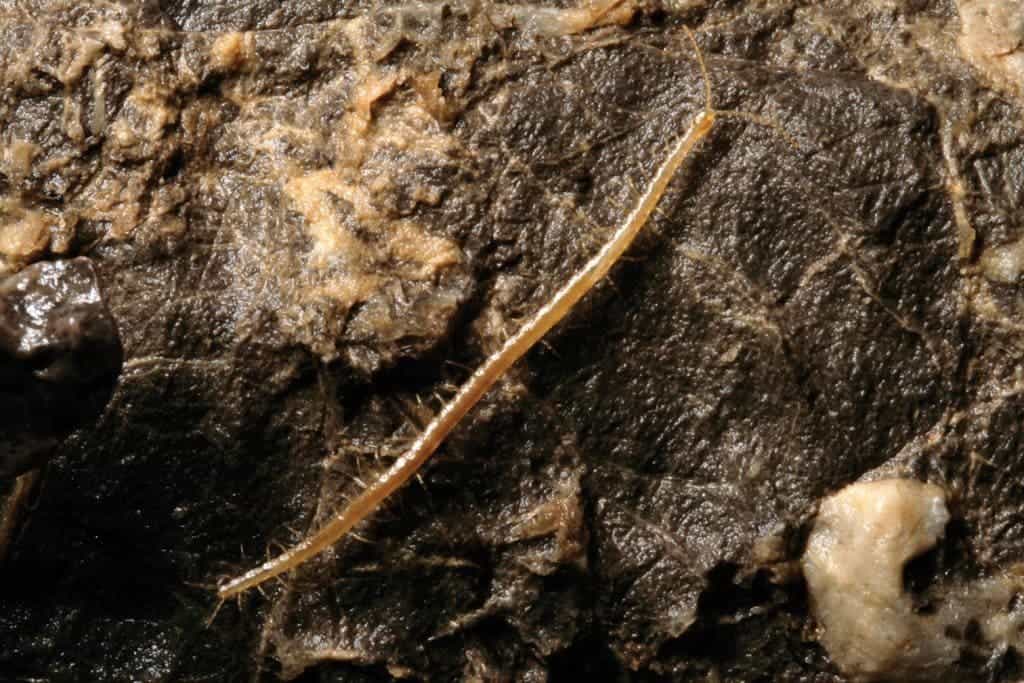 Like other species, Geophilus hadesi hunts smaller invertebrates, including worms, spiders and larvae. Because it lives in caves with little light, it lacks pigmentation. The species is part of a group called geophilomorphs who spend their entire lifecycles dwelling in caves (only two centipede species are known to do this).

“The change of a species’ appearance is usually a result of a long evolution that is likely to have happened [over] the course of millions of years,” said Stoev, who noted that the Hades centipede has also adapted to the deep caves’ cold temperatures, which can drop as low as 37 degrees Fahrenheit (3 degrees Celsius). 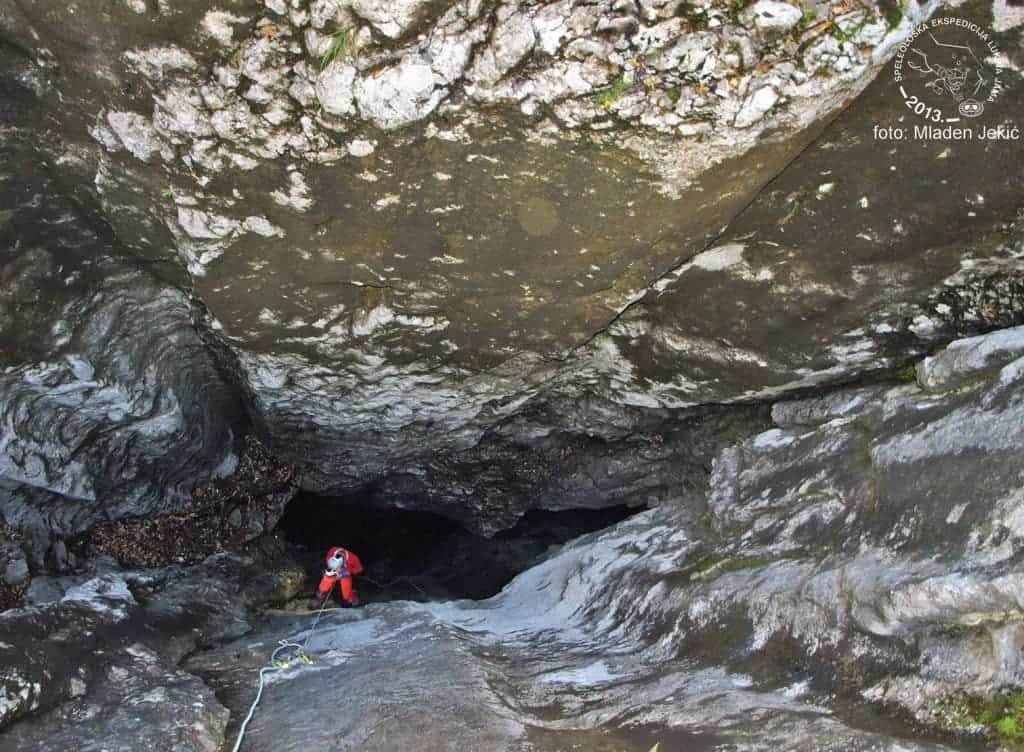 “It could be a dramatic change in the outside temperatures and overall conditions that forced less-adaptive organisms to seek shelter underground where the conditions are more stable and less dependent on the outside fluctuations,” Stoev said.

The discovery of the centipede is yet another reminder that we still have much to understand about the environment and the biodiversity in caves.

You can read the entire scientific article for free, here.