A chance discovery by diamond-prospecting geologists provides a glimpse into the Earth’s past.

Diamond exploration samples from Baffin Island, Canada point to a never-before-seen part of the North Atlantic craton—an ancient part of Earth’s continental crust that stretches from Scotland to Labrador. The finding will allow researchers to better map the lost continents of Earth’s distant past.

A diamond in you

“For researchers, kimberlites are subterranean rockets that pick up passengers on their way to the surface,” explains University of British Columbia geologist Maya Kopylova. “The passengers are solid chunks of wall rocks that carry a wealth of details on conditions far beneath the surface of our planet over time.”

Kimberlite rocks form very, very deep in the Earth’s crust — similarly to diamonds — and are thus a staple of diamond prospectors around the world. After forming for millions of years at depths of between 150 to 400 kilometers, these rocks are sometimes pushed up to the surface by various geological processes, snatching diamonds along for the ride.

Kopylova and colleagues were analyzing samples from De Beers’ Kimberlite Province Chidliak in southern Baffin Island, when they noticed that the samples were peculiar. Their mineral makeup matched that in other portions of the North Atlantic craton, which is “so unique there was no mistaking it”. The mineral compositions of adjacent ancient cratons have “completely different mineralogies,” Kopylova explains.

Cratons are pieces of continents billions of years old that have remained stable over time and act as the kernel of today’s continents — think of them as anchors that today’s landmasses hold on to. Most cratons have been broken up and moved around by tectonics over time, but some still form the bedrock of modern tectonic plates like the North American plate. Knowing where the pieces of these cratons are today allows researchers to understand how they evolved and moved over time, in essence allowing them to map the evolution of our planet’s surface.

“Finding these ‘lost’ pieces is like finding a missing piece of a puzzle,” says Kopylova. “The scientific puzzle of the ancient Earth can’t be complete without all of the pieces.”

To the best of our knowledge so far, the continental plate of the North Atlantic craton broke apart some 150 million years ago, and the fragments spread from northern Scotland to southern Greenland and Labrador. the newly-discovered fragments would increase its known expanse by roughly 10%.

“With these samples we’re able to reconstruct the shapes of ancient continents based on deeper, mantle rocks,” says Kopylova. “We can now understand and map not only the uppermost skinny layer of Earth that makes up one percent of the planet’s volume, but our knowledge is literally and symbolically deeper.”

“We can put together 200-kilometer deep fragments and contrast them based on the details of the deep mineralogy.”

The paper “The metasomatized mantle beneath the North Atlantic Craton: Insights from peridotite xenoliths of the Chidliak kimberlite province (NE Canada)” has been published in the Journal of Petrology.

Researchers have discovered what appears to be a cache of diamonds hidden in the Earth’s mantle. This suggests that, at a geological scale, diamond might not be the exotic mineral we once thought it to be — they may be quite common, though not easily accessible. 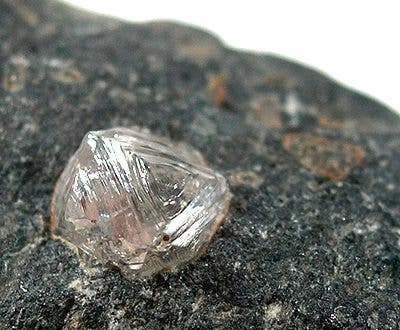 The world’s deepest borehole goes down 12.262 kilometers (40,230 ft). How is it then that we know so much about the depths of the Earth, which boasts an average radius of over 6,300 km? As is so often the case, scientists have gathered a trove of data which enabled them to infer many things beyond sight — in this case, of the Earth’s interior properties.

Most of this data comes from seismic waves — which are essentially subsurface acoustic waves. Every time an earthquake (or a large enough explosion) takes place, it sends out seismic waves which can be picked up by seismic stations across the world. According to the U.S. Geological Survey’s National Earthquake Information Center, there are over 3000 seismic stations currently operating across the world.

Seismometers record the ground movement on a seismograph. Based on the wiggles of the seismograph, certain pieces of information can be drawn, particularly about the nature of the ground the wave has passed through. Of course, this is a great simplification and the seismogram analysis process is much more intricate, often involving a great deal of complexity and mathematical algorithms. You can pick up simpler things, like where the earthquake epicenter was and how much energy the earthquake had, or use the data for complex things — like constructing an image of what the Earth’s interior might look like. 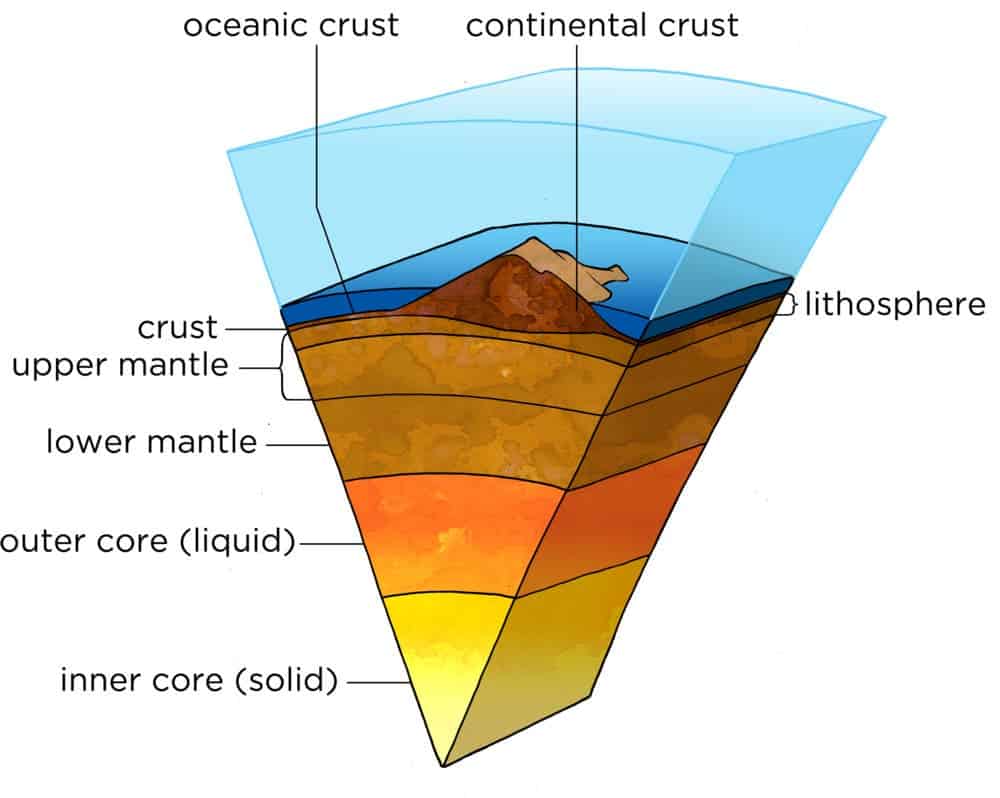 A simplified “slice” of the Earth, showing its major components (not to scale). Image credits: Siyavula Education.

For decades, agencies such as the USGS, universities, and research groups have been keeping track of this seismic activity. Among many other things, scientists have noticed an intriguing anomaly: the velocity of some seismic waves in some areas could not be explained with our existing knowledge of the Earth’s structure.

In this particular case, an MIT team aimed to identify the composition of so-called cratonic roots that might explain the spikes in seismic speeds. They concluded that the reason for this anomaly is diamonds.

“This shows that diamond is not perhaps this exotic mineral, but on the [geological] scale of things, it’s relatively common,” says Ulrich Faul, a research scientist in MIT’s Department of Earth, Atmospheric, and Planetary Sciences. “We can’t get at them, but still, there is much more diamond there than we have ever thought before.” 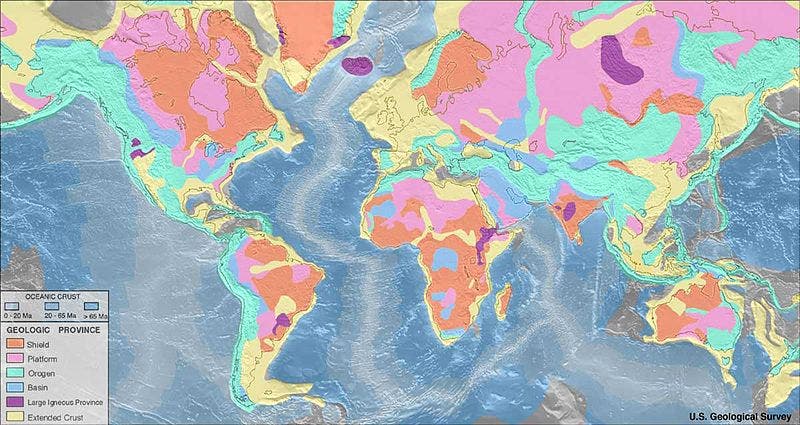 Cratons whose ancient rocks are widely exposed at the surface are typically called shields. If the ancient rocks are largely overlain by a cover of younger rocks, the craton is generally referred to as a platform. Image credits: USGS.

Cratons are very old and stable parts of the Earth’s tectonic crust. Most cratons on Earth have survived cycles of merging and rifting of continents, and are typically located at the interior of tectonic plates. They have a thick crust and deep lithospheric “roots” that can extend several hundred kilometers into the Earth’s mantle.

Cratons are also colder and less dense than the surrounding mantle, which means that they would yield slightly faster seismic waves — but this alone can’t entirely account for the speed anomaly. So there must be something else.

“The velocities that are measured are faster than what we think we can reproduce with reasonable assumptions about what is there,” Faul says. “Then we have to say, ‘There is a problem.’ That’s how this project started.”

In order to solve this conundrum, Faul and colleagues started assembling virtual rocks which could theoretically exist at the temperature and pressure conditions in those parts of the mantle. They then calculated how fast seismic waves would pass through these structures, to see if this would fit the observed seismic data.

They found that the data would be best explained by a craton rock composition of 1 to 2 percent diamond. This would translate to about quadrillion tons of diamond.

In a way, this makes a lot of sense. We know that diamonds are forged deep in the bowels of the Earth, in high-pressure, high-temperature environments. The only reason why we’re able to find diamonds is that they’re brought closer to the surface by volcanic eruptions which act like “pipes” — bringing them to the surface, where we at least have a chance of finding them.

Of course, it’s important to note that Faul and colleagues found no direct evidence that the craton roots do contain diamonds, it’s just that this explanation seems to fit best. But this line of thinking has brought us so far, so at least for now, it seems convincing enough.

“It’s circumstantial evidence, but we’ve pieced it all together,” Faul says. “We went through all the different possibilities, from every angle, and this is the only one that’s left as a reasonable explanation.”