This is the incredible story of Zion, the first quadruple amputee child in whom researchers observed massive brain reorganization before and after the hand transplant.

Zion was only two years old when he lost both his hands and feet due to a grave generalized infection. At the age of four, his mother donated one of her kidneys to him, allowing doctors to consider him as a candidate for a bilateral hand transplant. Zion had already been on immunosuppressant drugs.

Hand transplants in children are rare and difficult to perform, due to the extremely small size of the vessels and nerves that need to be reconstructed. Zion’s surgery was the first pediatric hand transplant in the world. The medical team included twelve surgeons, divided into four smaller teams that had to find and label all the structures that were to be sewn together. The whole procedure lasted 11 hours.

Now, Zion can do all the things he always wanted to: feed himself, scratch his nose, wave goodbye, shake hands, even play baseball. One special thing he is really eager to do is to write, with his own hands, a letter to the parents that had donated their child’s hands to him.

How it all began

The researchers recorded the child’s brain activity two years before the surgery, and then monitored the way his brain rewired after the amputation — a process called massive cortical reorganization (MCR).

“We had hoped to see MCR in our patient, and indeed, we were the first to observe MCR in a child. We were even more excited to observe what happened next — when the patient’s new hands started to recover function. For our patient, we found that the process is reversible.” said Gaetz.

For each part of the body that transmits sensitive information to the brain, there is a specific region of the cerebral cortex that is activated. This biological phenomenon is known as somatosensory representation.

“We know from research in nonhuman primates and from brain imaging studies in adult patients that, following amputation, the brain remaps itself when it no longer receives input from the hands,” said first author William Gaetz, PhD. “The brain area representing sensations from the lips shifts as much as 2 centimeters to the area formerly representing the hands.” 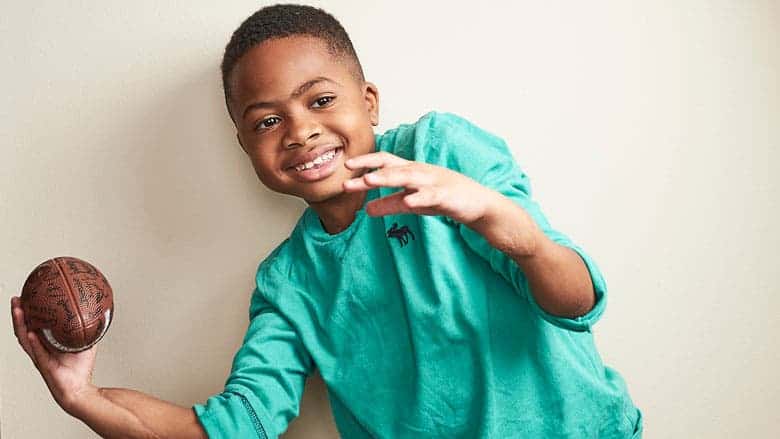 Magnetoencephalography (MEG) is a neuroimaging technique that measures the magnetic activity of elected areas in the brain. Using MEG, scientists studied the location, timing, and strength of Zion’s reactions to sensory stimuli (differently sized monofilaments) applied to his fingers and lips. Four such MEGs were performed in the year following the transplant, using five children the same age as Zion as controls.

“At visits 1 and 2, index fingertips were insensitive to tactile stimulation with even the largest monofilaments. At visits 3 and 4, the patient was able to sense light touch on the fingertips,” the authors wrote in the paper published in the journal Annals of Clinical and Translational Neurology.

The first two times, researchers found that the signal transmitted from Zion’s lips was recorded in the hand area of the cortex, but with a 20 milliseconds delay, compared to controls. At the latter two MEGs, the lip stimuli had returned to the lip-designated area, indicating that the brain map was regaining its previous configuration but with higher-than-normal signal strength.

“The sensory signals are arriving in the correct location in the brain, but may not yet be getting fully integrated into the somatosensory network,” said Gaetz. “We expect that over time, these sensory responses will become more age-typical.”

Gaetz added, “These results have raised many new questions and generated excitement about brain plasticity, particularly in children. Some of those new questions include, what is the best age to get a hand transplant? Does MCR always occur after amputation? How does brain mapping look in people born without hands? Would we see MCR reverse in an adult, as we did in this patient? We are planning new research to investigate some of these questions.”

The teams from the Children’s Hospital of Philadelphia and the Perelman School of Medicine at the University of Pennsylvania published their findings in the Annals of Clinical and Translational Neurology on December 6th, 2017.