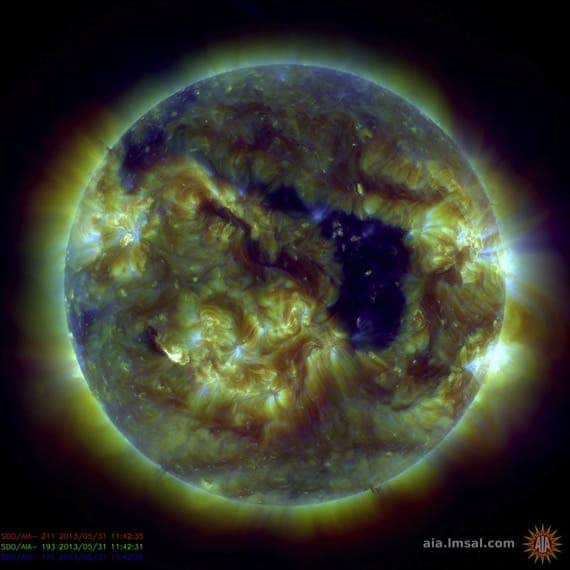 If you’re a regular follower of NASA’s updates, you may have caught glimpses of some of the X-ray photos they report showing the surface of the sun. In these photos, dark specks of various sizes can be seen, which are actually what astronomers refer to as coronal holes. They may extend from the Sun’s equator to its poles, or even in some cases, from pole to pole. Recently, one of these coronal holes rotated towards Earth and chances had it that its one of the largest NASA astronomers have witnessed in a very long time. And what a sight it is!

Coronal holes aren’t your typical holes, mind you. A coronal hole, as the name implies, is a large region in the sun’s corona (the outer atmosphere of the sun), which is less dense and is cooler than its surrounds. This marvelous picture was taken by the Solar Dynamics Observatory’s Atmospheric Imaging Assembly, and was made by combining three wavelengths of UV light.

Are coronal holes dangerous? The short answer would be no. Coronal holes are the sources of solar wind gusts that travel through space and hit Earth’s magnetic field, causing marvelous spectacles of light called auroras. However, the same coronal holes spew solar gusts that cause geomagnetic storms, interfering with satellite communications. In general, geomagnetic storms originating from a coronal hole have a gradual commencement and are not as severe as storms caused by coronal mass ejections, which usually have a sudden onset.