Virginia Tech researchers just reported a breakthrough that could help remove condensation much more efficiently than ever before. The study suggests water-repelling surfaces can be tuned such that the expelled water droplets become almost imperceptible to the naked eye.

Hydrophobic surfaces covered in nanopillars that resemble stalagmites on a cave’s floor can control when a dew droplet will jump. Taller and slender pillars can make droplets as small as two micrometers jump off the surface of a material. Credit: Virginia Tech.

In 2013, biologists showed that cicadas — the busy insects that fill summer nights with their mating calls — keep their wings fresh and clean with nothing but a spritz of dew drops. The wings are essentially covered in superhydrophobic surfaces that make dew drops “jump” by themselves, carrying contaminants like dust with them. That’s a very nifty trick, one that scientists are currently exploring to cool hotspots in high-performance technologies.

Jonathan Boreyko, an assistant professor in the Department of Biomedical Engineering and Mechanics in the Virginia Tech College of Engineering, has been studying jumping dew droplets since he was in grad school. His research suggests that dew droplets jump from water-repellent surfaces only after they reach a threshold diameter of about 10 micrometers. It was never unclear why until Boreyko and colleagues finally got the bottom of things.

The team designed and tested six different hydrophobic surfaces, all comprised of tiny nanopillars that are reminiscent of stalagmites on a cave’s floor. After testing each surface one by one, the researchers found that the critical size of the jumping dew droplet can be fine tuned if you tweak three parameters: the height, diameter, and pitch of the nanopillars.

“These results, correlated with a theoretical model, revealed that the bottleneck for jumping is how the droplets inflate inside of the surface after they first form,” Boreyko said in a statement.

The taller and slender the nanopillars are, the smaller the water droplets that jump off the surface can become, down to an incredible two micrometers. Conversely, short and stout pillars increase the critical size of the jumping water droplets, up to 20 micrometers in the case of this experiment.

Now that we know the jumping droplet phenomena can be fine tuned, companies can design more efficient condensation removal systems.

“We expect that these findings will allow for maximizing the efficiency of jumping-droplet condensers, which could make power plants more efficient and enable robust anti-fogging and self-cleaning surfaces,” Boreyko said. “The ultimate goal is for all dew droplets forming on a surface to jump off before they are even visible to the eye.”

Pack up your tinfoil hats and sit down, conspiracy buffs everywhere, because I have some bad news — chemtrails aren’t a thing. The conspiracy theory, according to which shady organizations or even governments use aircraft to seed all sorts of chemicals into the air we breathe, just doesn’t stand up to scrutiny, finds the first peer-reviewed study on the subject. 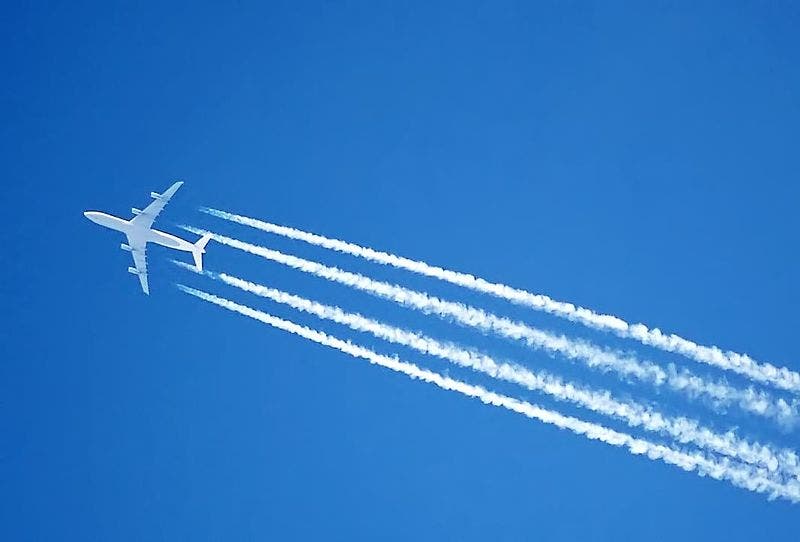 Ah, chemtrails. These glorious, elegant, white trails that airplanes leave in their wake have long been, without any form of proof, believed to be the government’s way of…I don’t know really. Controlling the weather? Controlling our minds? Something nefarious, anyway. Still, the conspiracy theory is going strong, unabated by the total lack of evidence. A 2011 international survey showed that nearly 17 percent of respondents believed in secret, large-scale spraying programs. Humans are very good at finding explanations to fit their beliefs, and everything from how long a trail lasts in the sky, differences in color or shape have been cited as proof that The Government is pumping chemicals into the air, man!

The sad thing is that there actually is an explanation for why these trails form. They’re called contrails, short for condensation trails, and it’s been shown that they form as water vapor condenses around aerosols in aircraft exhaust. The scientific community has been reluctant to engage the issue head on, however, as they do with nearly every piece of pseudoscience or conspiracy theory out there.

Why? I don’t know. Maybe researchers feel that there are better issues to spend their time on, or that their reputation will suffer if they discuss one of these subjects. Maybe they just think that no amount of evidence is going to dissuade some people.

Whatever the cause, ignoring these issues isn’t in anyone’s best interest. Luckily, a team stepped up and published the first peer-reviewed journal article regarding chemtrails. They report not finding any evidence of covert large-scale chemical spraying programs going on, and concluded that distinctive ‘chemtrail’ patterns in the sky can all be explained by the regular science of water vapor.

“We wanted to establish a scientific record on the topic of secret atmospheric spraying programs for the benefit of those in the public who haven’t made up their minds,” said lead researcher Steven Davis from the University of California, Irvine.

“The experts we surveyed resoundingly rejected contrail photographs and test results as evidence of a large-scale atmospheric conspiracy.”

The team interviewed 77 scientists, atmospheric chemists who specialize in condensation trails or geochemists working on atmospheric deposition of dust and pollution. Out of this group, 76 said they hadn’t come across evidence of secret, large-scale spraying programs. The 77th said she came across a “high levels of atmospheric barium in a remote area with standard ‘low’ soil barium.”

In other words, a geochemical imbalance that could be caused by chemicals being sprayed into the atmosphere but no evidence of it actually happening.

The researchers were also shown four images that are commonly circulated as chemtrails, and all of them agreed they were all ordinary contrails. They even provided peer-reviewed citations to back up their statement.

“Despite the persistence of erroneous theories about atmospheric chemical spraying programs, until now there were no peer-reviewed academic studies showing that what some people think are ‘chemtrails’ are just ordinary contrails, which are becoming more abundant as air travel expands,” said one of the researchers, Ken Caldeira from the Carnegie Institution for Science.

“Also, it is possible that climate change is causing contrails to persist for longer periods than they used to.”

The researchers also suggested that contrails are more common these days simply because air travel is becoming more regular.

The team says that their research probably won’t convince anyone who already has their mind made up that chemtrails are real, but they hope it will offer people new to the topic some objective information for when they research chemtrails.

“I felt it was important to definitively show what real experts in contrails and aerosols think,” said Caldeira. “We might not convince die-hard believers that their beloved secret spraying program is just a paranoid fantasy, but hopefully their friends will accept the facts.”

The full paper “Quantifying expert consensus against the existence of a secret, large-scale atmospheric spraying program” has been published in Environmental Research Letters.