New research is looking into the interplay between society and moralizing, ‘big gods’ — the latter seem to be a consequence, rather than a driver, of the former. 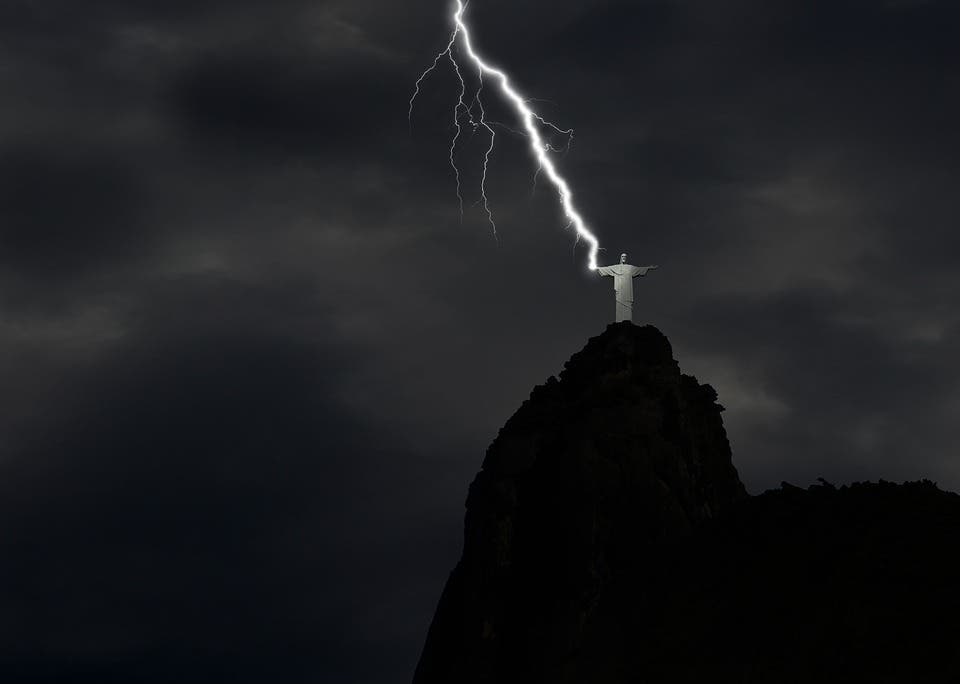 Prevailing theories today, the paper explains, hold that ‘big gods’ nurtured cooperation between large groups of genetically-distinct people, in effect underpinning societies as we know them today. These deities are defined as having a powerful moralizing effect over societies — being perceived as entities that punish ethical faux-pas — thereby acting as the common moral glue holding large groups together. However, the study we’re discussing today finds that this isn’t the case. Rather, the team suggests, it’s these complex societies that produced their complex gods, not the other way around.

Of gods and men

“It has been a debate for centuries why humans, unlike other animals, cooperate in large groups of genetically unrelated individuals,” says Peter Turchin from the University of Connecticut and the Complexity Science Hub Vienna, one of the paper’s co-authors.

The earliest bunches of people lived in close-knit family units. They would cooperate because doing so would help ensure that their bloodline — and thus, their genes — would survive. People would try their best to keep themselves and their families alive, even if that meant raiding other family-groups (with whom they shared no genes, thus making it a-OK). It’s a very straightforward, very intuitive approach to survival and cooperation.

Since then, things have changed. We work with and for people who have no blood ties to ourselves. We share residential buildings with people we sometimes never even meet. We help fund charities for causes half the world away. If we applied the ‘me and mine’ mentality of yore, it would make perfect sense to protect our kin-group even at the expense of others. But we don’t do that. Society would run amok, and we like society. The million-dollar question (or whatever currency it is that anthropologists use; knucklebones, maybe?) is why.

Agriculture, warfare, and religion have been proposed as the main driving forces behind our need to cooperate. Such pursuits hinge on a community’s ability to work together in large numbers. Tilling the fields requires many able hands, as do raids or defense; gods, in turn, provide the moral incentives (i.e. eternal punishment) needed to hold communities together when blood-ties don’t apply. 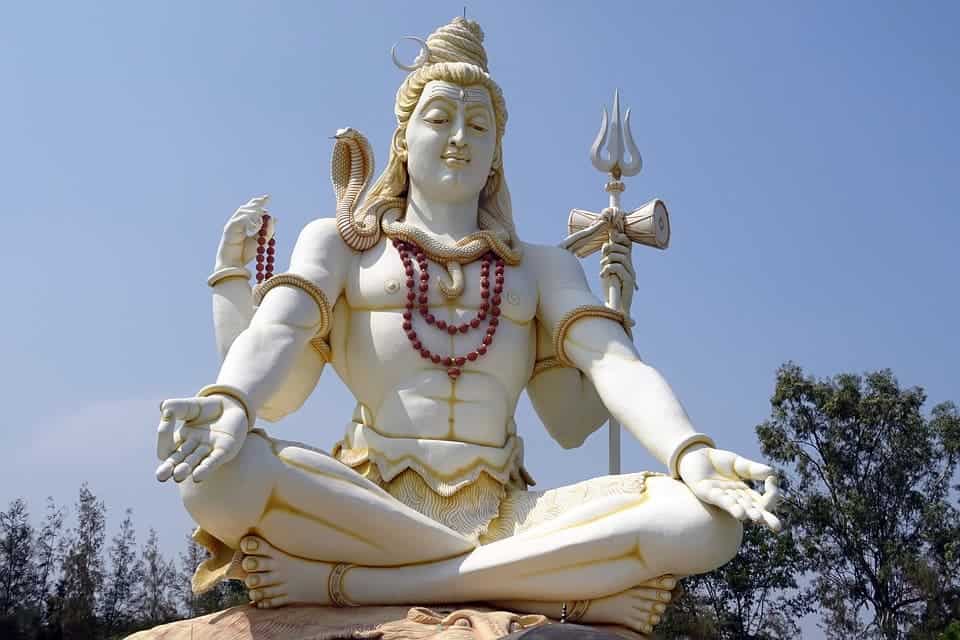 Nobody wants to make the boss mad. Especially when the boss is the god of war and can thus really mess up eternity for you.
Image credits Bishnu Sarangi.

But, the team wasn’t convinced. Working with data from the Seshat Global History Databank, “the most current and comprehensive body of knowledge about human history in one place” according to their website, they pitted these theories against statistical rigor. The databank contains about 300,000 records on social complexity, religion, and other characteristics of 500 past societies over 10,000 years of human history, which the team used to analyze the relationship between religion and social complexity.

If ‘big gods’ spawned complex societies, then logic dictates that they appeared in these peoples’ collective imaginations before their societies increased in complexity — or, in other words, that the fear of divine retribution coaxed people into behaving in a socially-acceptable way. The team, however, reports that this wasn’t the case.

“To our surprise, our data strongly contradict this [big god] hypothesis,” says lead author Harvey Whitehouse. “In almost every world region for which we have data, moralizing gods tended to follow, not precede, increases in social complexity.”

“Our results suggest that collective identities are more important to facilitate cooperation in societies than religious beliefs.”

The complexity of a society can be estimated by social characteristics such as population, territory, the sophistication of its institutions and information systems, the team explains. Religious data used in the study included the presence of beliefs in supernatural enforcement of reciprocity, fairness, and loyalty, as well as the frequency and standardization of religious rituals.

Big gods may not have spearheaded communities, the team explains, but ritual and religion definitely had a large part to play. Standardized rituals tended to appear, on average, hundreds of years before the earliest evidence of moralizing gods, they report. Where such deities would have been the proverbial stick, these rituals acted like the carrot — they gave people a sense of belonging and group identity that allowed cooperation. 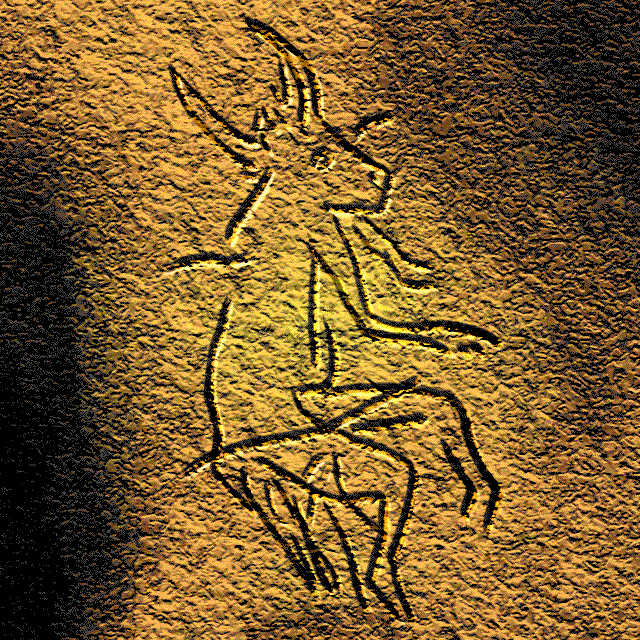 Picture of a half-animal half-human in a Paleolithic cave painting in Dordogne, France. Paleoanthropologists Andre Leroi-Gourhan and Annette Michelson take the depiction of such hybrid figures as evidence for early shamanic practices during the Paleolithic.
Image and caption credits José-Manuel Benito / Wikipedia.

The Seshat database proved invaluable in this study. It has been founded by data and social scientist Peter Turchin, together with Harvey Whitehouse and Pieter François from the University of Oxford (also a co-author of this study) in 2011. It aimed to integrate the expertise from various fields into an open-access database specifically to allow researchers to tease out cause from effect in social and historical theories, they say. Through the work of dozens of researchers the world over — who compiled data on social complexity and religious beliefs and practices from polites (communities) from 9600 BCE up to today — Seshat grew into the first databank of standardized, quantitative historical knowledge in the world.

“Seshat is an unprecedented collaboration between anthropologists, historians, archaeologists, mathematicians, computer scientists, and evolutionary scientists”, says Patrick Savage, corresponding author of the article. “It shows how big data can revolutionize the study of human history.”

“[It] allows researchers to analyze hundreds of variables relating to social complexity, religion, warfare, agriculture and other features of human culture and society that vary over time and space,” explains Pieter François. “Now that the database is ready for analysis, we are poised to test a long list of theories about human history.”

One of the biggest questions the team wants to tackle (of which the present paper is the first step) is why we came to work together in societies in excess of millions of people despite lacking any genetic incentive to do so.

The paper “Complex societies precede moralizing gods throughout world history” has been published in the journal Nature.

A duo of researchers at the Colorado State University (CSU) have used the tools of mechanical engineering to studying community resilience. To prove that their method is sound, they turned to the most troubled town out there — Batman’s fictional Gotham City.

Resilient communities have the capacity to withstand unforeseen disasters, such as earthquakes, floods, or social upheaval, and have the internal resources to recover after they’ve passed. Still, while there’s agreement on what the term means, a one-size-fits-all approach to delineate and measure this quality has proven elusive — from both an engineering and social science point of view.

A new paper penned by CSU associate professor of civil engineer Hussam Mahmoud and grad student Akshat Chulahwat offers a new approach on the issue. By integrating a community’s infrastructure, social, and economic features, the two have created a mathematical model that measures a community’s ability to withstand major shocks over time and space. The technique can be used for both natural and man-made disruptions, and the researchers hope it will help communities address their shortcomings to better prepare for hazards.

Metrics? We gotham all

Community resilience is typically viewed as an issue incorporating elements of engineering, economics, and social studies. It’s a hugely broad topic, and since every community has a different social context, their members have to decide which metrics matter most to them and focus on those. These metrics generally coalesce into a number of “lifelines” such as water, housing, power, health, transportation capability, and so on.

It’s not necessarily a bad way of doing things, but it doesn’t allow any meaningful standard by which to judge resilience between communities. It’s also a pretty subjective method of estimating what area needs improvement, and as such, results can be less than stellar.

The team wanted to find a way of bringing all these metrics together into a universal method of assessing resilience. Their approach relies on a mathematical tool engineers use to study stress and strain in structural elements like girders or walls — finite element analysis. The duo based their work on the assumption that a community’s response to a disaster is largely similar to the swing of a pendulum or the way a vibrating string responds to force.

“Our model can help us determine what happens to your community, both spatially and temporally, if it’s struck by a natural disaster, economic downturn or social disruption,” said Mahmoud.

The new method uses the same lifelines but simplifies resilience into three classes: social, economic, and infrastructure. To adapt these to the rigors of finite element analysis, they considered mass to represent social vulnerabilities, damping as funds available for recovery, and stiffness to represent infrastructure.

To check if their model works, the team picked Batman’s Gotham City as a test-bed. First, they divided the community into uptown, midtown, and downtown, and then they simulated various disasters — such as a jail riot at Arkham Asylum, which was located near uptown Gotham.

Among the team’s observations in this proof-of-concept run is that the factors are interdependent: if one suffers a change, the others follow suit. Another is that a fast recovery isn’t necessarily the best — bouncing back too quickly from a disaster can leave groups unstable and vulnerable in the face of new challenges.

Mahmoud says he was inspired to define resilience in part by studying the Arab Spring of 2011 in Egypt and other parts of the Middle East. The period saw widespread demonstrations that lasted several weeks, and its social and economic tolls would stay with communities for years — but their impact was difficult to measure, he adds. The authors hope their model will provide a framework for better understanding how disruptions, like the Arab Spring, affect communities long term.

The paper “Spatial and Temporal Quantification of Community Resilience: Gotham City under Attack” has been published in the journal Computer-Aided Civil and Infrastructure Engineering.