The Colorado River is among the most important ones of the United States, rising in the Rocky Mountains of Colorado and then flowing westward to the Gulf of California. But that flow is now gradually being reduced because of climate change, according to a new study.

The river extends for 2,330 km and provides water to about 40 million people that live in the cities of Denver, Las Vegas, and Los Angeles, among others. That makes it very important for the communities around it, whose water availability could be altered if the river flow keeps changing.

Researchers from the Institute of Geological Studies of the United States (USGS) developed a detailed mathematical model of water movements (including snow, rain, evaporation and river flow, among others) in the upper river basin between 1913 and 2017, based on records of rainfall and temperature as well as satellite surveys.

They observed that the increase in temperature has caused a smaller accumulation of snow and ice in successive winters. Less snow means that melting occurs earlier in the spring. In turn, a surface with less snow reflects fewer sun rays, which means that more rays end up being absorbed by the basin.

This additional energy absorption causes greater water evaporation, said Paul Milly, one of the scientists at USGS, which results in the lower flow. Thanks to the study, evaporation due to heating could be quantified: the annual flow rate is reduced by 9.3% for each rise of one degree Celsius.

The difference is significant. For the 1913-2017 period analyzed in the study, the flow of the river decreased by about 20%, according to the researchers “More than half of this decrease was associated with warming. The rest was related to variations in precipitation,” Milly said in a press release.

Global warming has already exceeded the 1ºC compared to pre-industrial levels and the trend will continue going up without ambitious actions from every country. That’s bad news for the Colorado River, as there could be a higher risk of water shortages for the seven states connected by the river.

But climate change isn’t the only threat that the river has to cope with. The agricultural production in the area means lots of water is pumped from the river. Farmers use about 80% of Colorado River water to irrigate four million acres, providing 15% of the US crop output. This has led to reservoirs as the Lake Mead facing record-low levels.

Last year, the US government imposed mandatory cuts in water use from the river because of a record drought. Arizona, Nevada, and Mexico agreed to take less water from the river and implemented conservation measures such as replacing lawns with desert landscaping.

The study was published in Science.

Dealing with invasive species is one of the challenges that accompanies globalization and in many areas of the world, it’s becoming harder and harder to tackle this issue. In Teller Lake, Colorado, 3,000 Koi fish (Japanese carp) are now swarming the water, wiping out native species and dramatically altering the environment.

“These are domestic fish actually.These are fish from a store I imagine. They can out-compete the native fish. They may need to drain the lake to remove the goldfish or using electro fishing, where they stun the fish and remove the invasive species. Goldfish are not a native species and are very harmful to the local aquatic ecosystem,” district wildlife manager for Boulder, Kristin Cannon says. “We strongly encourage the public not to dump their unwanted pet fish in our waters. It is bad for our environment, as well as illegal.”

It’s not clear why, when and how the fish popped up in the lake – the explosion of these exotic fish which are not native to North America seems to have occurred three years ago, and authorities suspect that a local pet store is responsible. The fact that all the fish seem to be some three years old seems to be telling for that aspect.

“Based on their size, it looks like they’re 3-year-olds, which were probably produced from a small handful of fish that were illegally introduced into the lake,” Ben Swigle, a fish biologist at the Colorado Parks and Wildlife (CPW), told Live Science.

It should already be well known that dumping fish or any foreign species into a natural environment is forbidden – the consequences can be disastrous. A local ranger estimates that there are now 3-4,000 alien koi fish swimming in Colorado Lake at the moment. As their numbers grow more and more, they will out-compete the local species and potentially drive them out, altering the entire ecosystem.

But even as the fish are successful in taking over the lake, their fate seems to be grim as well. Most of them will likely end up as food at a raptor rehabilitation program. Some residents have contacted park officials, asking to adopt some of the fish, but their requests have been denied so far. It’s not clear exactly what will be done with all these fish.

This isn’t the first time such fish have turned up in high numbers in the area. According to LiveScience, in 2012, some 2,275 koi goldfish had to be removed from Thunderbird Lake in Boulder, after a few were likely dumped there as “unwanted pets” two to three years earlier.

In March 2014, the US and Mexican governments decided to release a flow of water down the Colorado River, in an experimental attempt called “Minute 319”. The river has experienced record droughts in 2014, but surprisingly, this initiative reversed a 13-year decline in the greenness along the delta. 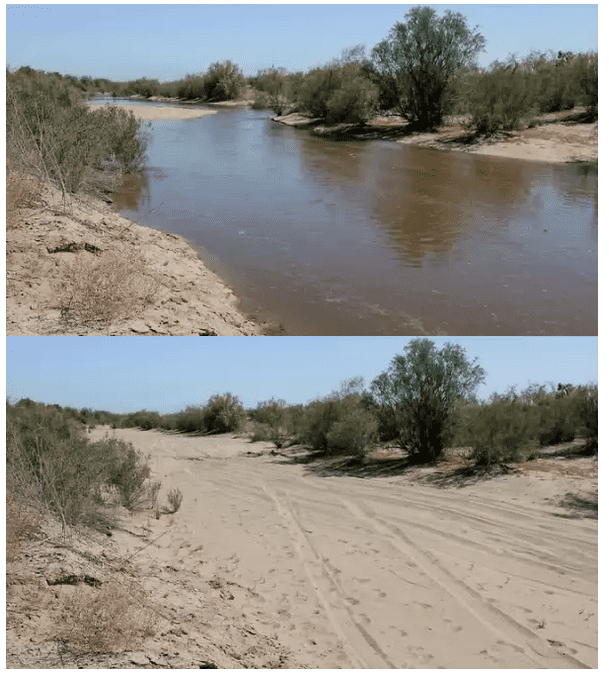 After and before images. Image via NASA.

The Colorado River stretches along 1,450-miles (2,330 km), encompassing seven US and two Mexican states. Known for its dramatic canyons and whitewater rapids, the Colorado river is also a vital source of water for agricultural and urban areas in the southwestern desert lands of North America. Recently, the river has been experiencing massive droughts due to over-utilization – 90% of the water is diverted in the US alone, not only for human and agricultural use, but also for electricity generation. Naturally, this over-usage has had a dramatic impact not only on the river itself, but also on the habitats it supports.

The year 2000 was the last time the Colorado River reached the Sea of Cortez, between Mexico’s mainland and Baja California. Since then, scientists reported that the water has never reached the sea, and the vegetation has been steadily decreasing in the area alongside the river. Satellite measurements were clear in highlighting the decline. But this spring pulse brought some of the green back. Pamela Nagler of the U.S. Geological Survey‘s Southwest Biological Science Center in Tucson, Arizona tracked the results, and there are some good news:

“The vegetation that desperately needed water was finally able to support more green leaves,” Nagler said. “These are existing trees, like saltcedar, willow and cottonwood, and a lot of shrubs and grasses that hadn’t seen much water in a long time.” 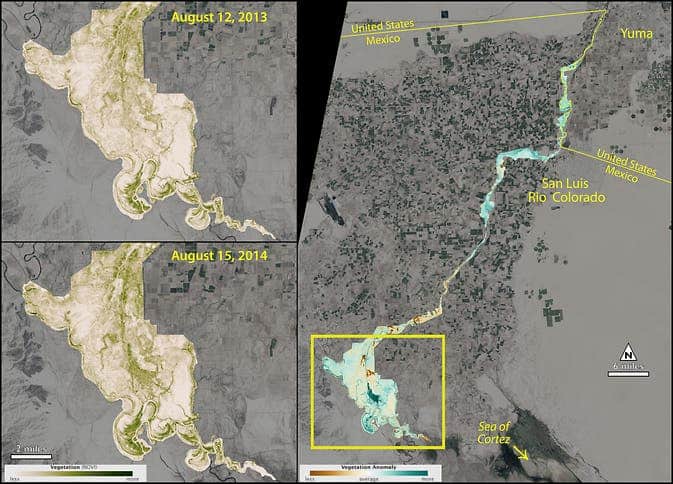 After the pulse flow, the lower Colorado River saw an increase in vegetation, as measured by the Normalized Difference Vegetation Index (NDVI) using Landsat 8 data. The left panel shows the NDVI before and after the pulse; the right panel shows the difference between the two measurements.
Image Credit: NASA’s Earth Observatory/J. Allen; NASA Goddard/M. Radcliff

Projects like this highlight the importance of having an archive of good Earth observations of the past to refer to, as well as comparable measurements into the future to measure how a policy changes the landscape. The fact that Minute 319 was successful is also a good sign.

“It’s important to have continuity of the data, so that when a policy decision is made to release the water, we have a system in place to evaluate its effects,” he said.

Remote sensing from satellites or technologies like LIDAR have revolutionized how we see the environment, and how we see the way we are impacting it. Basically, it allows us to view these things in a new way.

“Remote sensing with satellites such as Landsat and sensors such as MODIS allows scientists to conduct a range of studies they wouldn’t otherwise be able to,” said Karl Flessa, the co-chief scientist of the Minute 319 Science Team studying the hydrologic and biologic effects, and a geosciences professor at the University of Arizona in Tucson.

Other applications that this technology could have just for river monitoring includes detecting changes in the river channel, surface water, groundwater, plant growth, and habitat for resident marsh birds and migratory birds.

“In addition to remote sensing, ground-based geophysical methods such as time-lapse gravity maps provide information about the change in groundwater storage, which ultimately supports riparian vegetation,” said Jeff Kennedy, USGS hydrologist and participant in the study.

The project is also a reminder that different countries and organizations can and should work together when it comes to solving a problem which affects all the parties involved. Authorities are also considering repeating the experiment once more.

“There’s hope that we could release a pulse of water below Morelos Dam again,” Flessa said.

Lake Powell is at historic lows, and while for kayakers it may be a great opportunity to explore channels, it raises a big alarm regarding the future of water in the area. 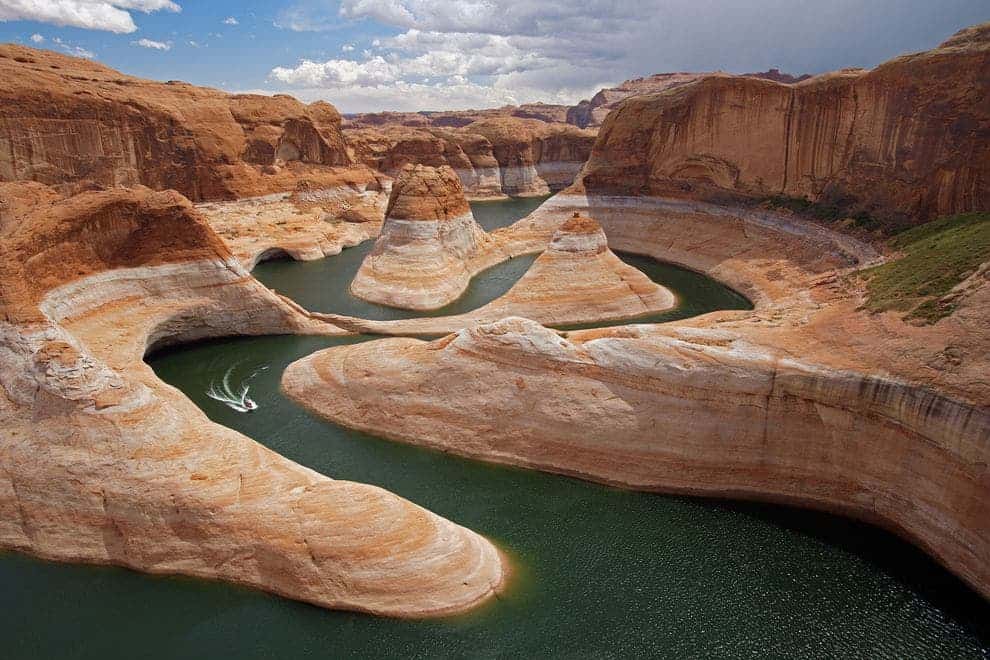 Lake Powell is a reservoir on the Colorado River between the border of Utah and Arizona. It is the second largest man-made reservoir by maximum water capacity in the United States and a very popular touristic destination, with over 2 million visitors every year; once a majestic reservoir, now it is only a shadow of what it used to be, with drought changing the landscape in worrying ways.

According to the U.S. Drought Monitor, 11 of the past 14 years have been drought years in the Southwest. The only difference was the type of the drought – “severe”, “extreme” or “exceptional” – not really words you wanna hear. Most climate scientists agree that with global warming and changing climate patterns, the situation will not only not improve – but it will get worse. There is growing concern regarding a mega drought in the Southwest. 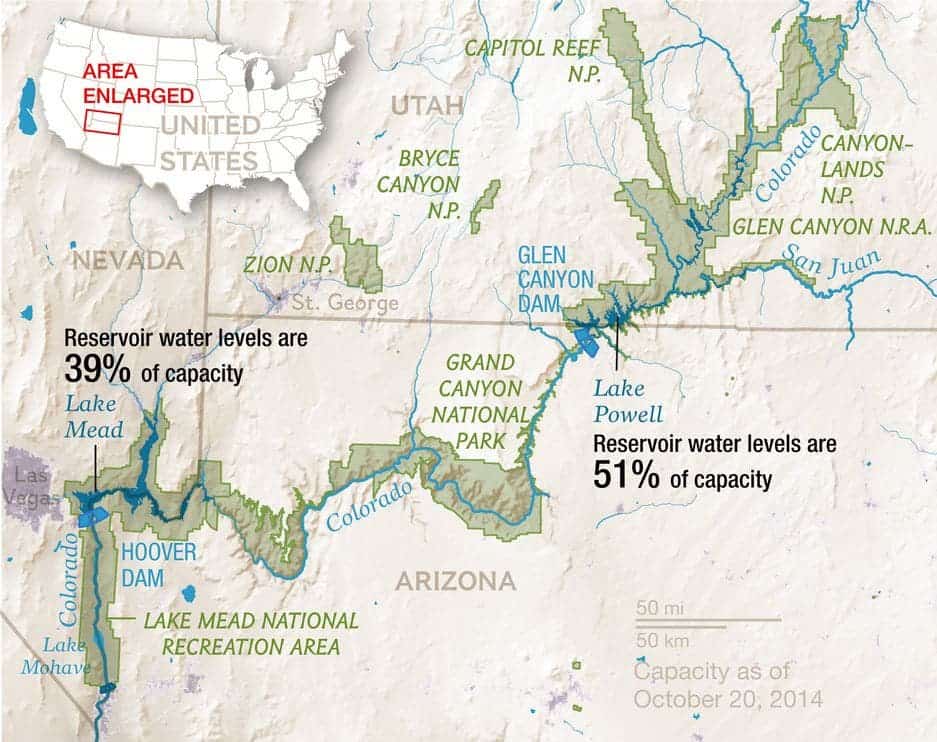 Should the drought accentuate in Lake Powell, the results will be disastrous; many farms and dairy operations are depending on this water to survive. Also, the ecosystem is depending on the river – and despite severe measures, the drought continues. Homeowners are fined if they water their lawns, while private companies are forced to limit their water consumption. But the effect will be even more far fetching.

As conditions continue to deteriorate, prices will likely rise throughout the entire country – or at least a big part of it. Some companies will have to shut down and go away. They will leave behind unemployed people and poverty. The left behind people will either suffer or go to another place – likely somewhere pretty close where they will put more stress on local water resources. Cities like Los Angeles, Denver, Phoenix, and Las Vegas depend on water from the Colorado river, and they are also consuming more and more. Climate change is affecting us all, and we’re all responsible for finding solutions. Hopefully, we’ll be able to do so before it’s too late.

Read a beautiful article on NG describing the situation in more detail here.