There are now 16% fewer honey bee colonies than in the winter of 2017-18, reports an international team of researchers led by the University of Strathclyde. 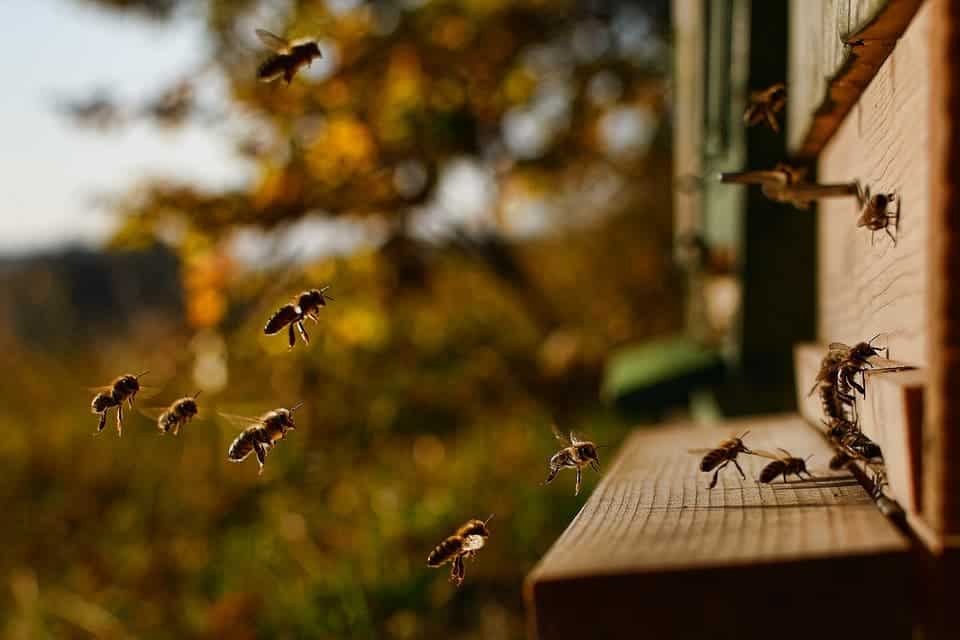 The study was based on voluntarily submitted information from 25,363 beekeepers from 33 countries in Europe — including the four nations of the UK — along with Algeria, Israel, and Mexico. Out of the 544,879 colonies these beekeepers managed, 89,124 were lost over the winter of 2017-18. The main causes of colony loss were weather, queen-related issues, and natural disasters.

“Loss of honey bee colonies is a highly complex issue. It tends to be influenced less by overall climate than by specific weather patterns or a natural disaster affecting the colony,” says Dr Alison Gray, a Lecturer in Strathclyde’s Department of Mathematics & Statistics, and lead author of the study.
“We observe colonies in winter but what happens to the bees then can be partly determined by the conditions of the previous summer.”

Bee colonies declined in number by 16.4% across the studied area, the team reports. While this is lower than the loss rate of 2016-17 (20.9%), it was significantly higher than the 2015-16 loss rate of 12%. The study is the work of researchers in the colony loss monitoring group of the international honey bee research association COLOSS, based at the Institute of Bee Health at the University of Bern, Switzerland.

One finding that stands out from similar studies of previous years is that beekeepers who moved their colonies during the foraging season — giving their bees access to new sources of pollen — reported fewer losses than those who didn’t move around. This finding goes against the grain of previous research. Overall, the team adds, smaller-scale beekeeping operations saw more losses than large-scale ones.

“The impact of beekeepers migrating their colonies would be expected to be partly dependent on the distance traveled and the reasons for migration; this would be worth further investigation,” Dr Gray explains.

“Many are also lost when there are problems with a colony’s queen — for example, if she goes missing or is not laying the fertilised eggs which go on to become worker bees. Most colonies are also under attack from varroa mites, a parasitic mite.”

The study focused on six sources of forage (the plants bees visit to collect nectar and pollen) in six categories: orchards; rapeseed; maize; sunflower; heather, and autumn forage crops. These were potentially useful food sources for bees, the team explains, and they could definitely help a colony out. However, they add that by extending the active and brood-rearing season of the bees, forage which was available late in the season could also extend the reproductive cycle for varroa mites, weakening the bee colonies and making winter losses more likely.

The paper “Loss rates of honey bee colonies during winter 2017/18 in 36 countries participating in the COLOSS survey, including effects of forage sources” has been published in the journal Journal of Apicultural Research.

Off I go, then!
Image credits Unsplash / Pixabay.

If you think things are looking dire right now, you might be surprised to find out that Stephen Hawking says you’re on point. It’s gotten so bad, in fact, that he says we should be on hard at working founding home-planet-B in the next 1,000 years to have any hope of survival.

“We must […] continue to go into space for the future of humanity,” Hawking said in a lecture at the University of Cambridge this week. “I don’t think we will survive another 1,000 years without escaping beyond our fragile planet.”

This isn’t the first time the professor has broached the subject of humanity’s fate. Last year, Hawking signed alongside more than 20,000 researchers and experts, including Elon Musk, Steve Wozniak, and Noam Chomsky on a letter calling for the ban of autonomous AI weapons, constructs that can use deadly force without human consent. He has also spoken out against concentration of wealth, climate change, overpopulation, and talked about the specter of pseudoscience. As Heather Saul from The Independent reports, Hawking has also estimated that viable human colonies on Mars won’t be a realistic option for another 100 years or so. In the meantime, we need to be “very careful” with the going-ons on Earth and beyond. Current troubles at home, including climate change, the rise of antibiotic-resistant plagues, and the very real threat posed by warring nations with nuclear capabilities, aren’t the full story.

Given his belief that humans seem hell-bend on repeating the mistakes of the past, Hawking says the development of “powerful autonomous weapons” is likely and will have grave consequences for humanity despite his warnings. The rise of such weapons may pit us against an enemy we don’t even understand yet, while in a precarious position. Robots are limited in what they can do today, but what happens when they equal, or even surpass us? And how can we deal with that and the effects of climate change — with shortages of land to grow crops, sinking shorelines, and spent ocean food resources — at the same time?

And then, cherry on top, an advanced alien race finds us in our desperate struggle — and decide they’re better entitled to Earth than we are.

“I am more convinced than ever that we are not alone,” Hawking says in his online film, Favourite Places.

“They will be vastly more powerful and may not see us as any more valuable than we see bacteria”.

That’s why Hawking advocates for a back-up plan. We might survive all this if there’s another place in the Solar System we can go to, a “safety planet” of sorts where we can go to lick our wounds. But the professor is still optimistic about our odds, given what we’ve accomplished so far.

“It has been a glorious time to be alive and doing research into theoretical physics”, he said. “Our picture of the universe has changed a great deal in the last 50 years and I am happy if I have made a small contribution.”

“The fact that we humans who are ourselves mere collections of fundamental particles of nature have been able to come so close to understanding the laws that are governing us and our universe is a great achievement.”

He closed his speech with a word of encouragement.

“Try to make sense of what you see, wonder about what makes the Universe exist. Be curious,” he told those attending the lecture.

“However difficult life may seem, there is always something you can do and succeed at. It matters that you don’t just give up.”