Goffin cockatoos are able to tear pieces of cardboard and build basic tools from them — which places them in a very select group of animals.

The Goffin’s cockatoo (Cacatua goffiniana) is a type of parrot native to Indonesia — and a smart one at that. In the recent study, researchers supplied six adult cockatoos with large cardboard sheets to tear, which they could tear into strips to use as tools. The testing setup was a food platform with rewards set at varying distances (4-16cm), behind a small opening which also varied in width (1-2cm).

The Goffins were quick to adapt to the task, and they were able to tear strips of different sizes based on how far away the food was. In every case, if a first-attempt tool was too short, the cockatoos would adapt and build a longer tool. The birds consistently made tools a bit longer than they needed to be, and the tools also became longer and longer as the study progressed — which researchers interpret as a way to minimize the risk of the tool being too short, which would not have yielded any reward. Having a tool that was too long did not come with a major drawback.

It’s not just cardboard; the birds were found to be able to develop tools from a wide array of materials, Alice Auersperg, study leader, adds. Here, cardboard was chosen because it made the cockatoos work harder to create longer tools.

“The reason that we choose cardboard is because they have to place a lot of parallel bite marks in order to gain length,” Auersperg told ZME Science. “This means that that we have a relatively continuous increase in effort. If we had them bite a splinter out of wood or break off twigs from a tree for this experiment the increase in effort for a longer tool will not be as obvious.”

However, things were different when the opening became narrower and narrower. When the opening was only 1 cm wide, just one bird was able to reach the reward. However, this might not have anything to do with intelligence, but rather with beak ergonomics.

“The bird that succeeded in the smallest opening was the only female we tested, it turned out she had a smaller beak and thus found it easier to make slimmer tools. Thus we believe that she succeeded for ergonomic reasons,” Auersperg explains.

Tearing up a piece of cardboard to make a tool. Image credits: Goffin Lab, University of Veterinary Medicine Vienna

“The way they inserted and discarded manufactured pieces of specific lengths differently depending on condition suggests that the cockatoos could indeed adjust their tool making behavior in the predicted direction but with some limits in accuracy. “

This isn’t the first study to highlight the intelligence of these cockatoos. In November 2012, Aursperg observed a captive bird called Figaro shaping splinters of wood and small sticks and using them as rakes to get otherwise inaccessible food. Further studies at the same facility showed that the birds are able to pass the Stanford marshmallow experiment — they were able to resist the temptation of an immediate reward for a later, more substantial reward. In 2013, cockatoos at Aursperg were also showed to be able to solve complex mechanical problems, in one case spontaneously working out how to open a five-part locking mechanism in sequence to retrieve a food item.

It’s not clear yet how much of these abilities are related to being captive. In an email to ZME Science, Auersperg said that they are comparing the innovative capacity of wild versus captive birds, and already have some “quite interesting results”, though the results are still a work in progress.

“They are an island species from a small archipelago in Indonesia where we have been studying them for the past two years as well. On the island, they are opportunistic extractive foragers, which means that they may often have to innovate novel ways to open food sources.”

At any rate, much like previous studies on crows, this goes to show that we really misjudged birds and their intellectual capacity.

The study has been published in PLoS ONE.

A new experiment showed that Goffin’s cockatoos can create tools for specific purposes, by cutting out a piece of cardboard to retrieve an out-of-reach nut. Previously, the birds have created tools out of a piece of wood, but there was debate whether this was done intentionally or was just a fortunate accident. 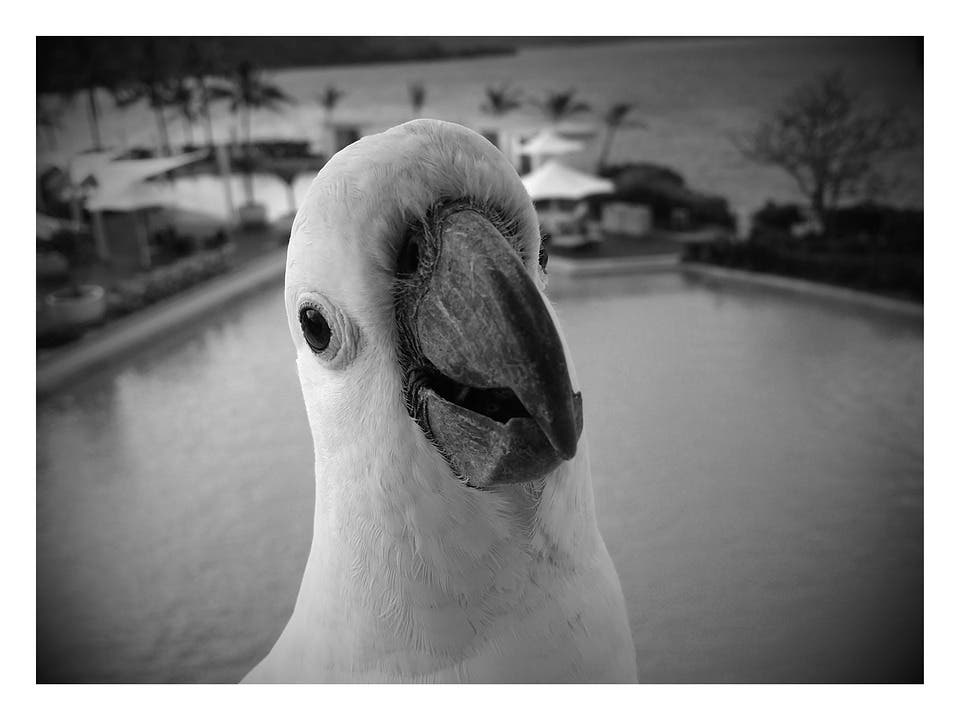 For all their unassuming, adorable looks, cockatoos are actually pretty smart. In 2012, a cockatoo named Figaro worked out how to retrieve a nut place tentatively out of his reach by crafting himself a tool, presumably to the sound of scientists’ jaws dropping. The bird figured he could tear a long splinter off a piece of wood, then progressively rake the food until it came into grabbing distance. He then showed the other birds how to do it, and they quickly picked up the practice. This suggests that cockatoos can follow a deliberate process of creating tools with a specific design, for specific purposes.

The experiment was met with heavy criticism, however.

“There were questions on whether the elongated shape of the tool was intentional,” says Dr Alice Auersperg at the University of Vienna in Austria, who described Figaro’s behaviour in 2012. “He could just have bitten the material out of frustration and ended up with a functional tool due to the age lines of the wood.”

The issue was that wood naturally breaks apart along its grain, forming an effective nut-retrieving tool. This made it unclear if the animals set out to knowingly fashion the tool, or they just vented their frustration on the block of wood by biting into it, with the fortunate outcome of creating a tool to get them the object of said frustration. To settle the debate, Auersperg and her team tested the cockatoos’ tool-making skills again. Their experiment used four male cockatoos, including Figaro. Each bird was allotted 10 minutes to create a long, thin tool from a set of materials then use it to retrieve a tasty cashew nut placed out of reach. For the task, they received by turns a leafy twig, a chunk of wood, and a cardboard sheet.

All four animals quickly understood they could remove the leaves off the twig to turn it into an effective nut-retriever. Three of the tested birds previously participated in the 2012 experiments, already knew how to tear the block of wood into spinsters, and did so again.

But both of this materials can easily be fashioned into a long, thin tool. Cardboard on the other hand, doesn’t naturally tear into such shapes. Still, Figaro and one other cockatoo were able to craft a tool from the sheet. Rather than pulling bits of cardboard out at random, they made a deliberate series of perforations in the sheet to create the desired shape. They then broke it off, and retrieved the nut.

Auersperg says the cardboard test makes a strong case that the cockatoos can “see” a useful tool in a piece of raw material, then go about crafting it. This would make them them the second family of birds we know of that are capable of fashioning tools, after the behavior was observed in Hawaiian and New Caledonian crows.

Even more impressive is the fact that this process hasn’t so far been observed in wild cockatoos, suggesting that it’s not an instinct-driven process and the birds spontaneously worked out how to craft tools. Careful study of wild birds might in fact reveal that they’re natural tool-makers — but, at this point, both options remain a possibility.

The full paper “Goffin’s cockatoos make the same tool type from different materials” has been published in the journal Biology Letters.