In a probable first for North America, researchers at the University of Guelph (U of G), Canada, have discovered meat-eating pitcher plants that dine on young salamanders, not just insects. 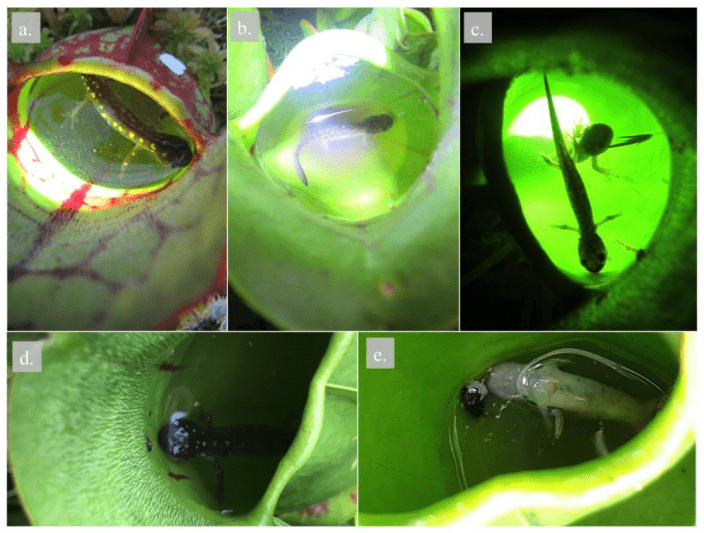 The bogs in Ontario’s Algonquin Park are rife with deadly plants — if you’re a baby salamander. A new study led by U of G biologist Alex Smith reports on the “unexpected and fascinating case of plants eating vertebrates in our backyard, in Algonquin Park.” The findings, the team explains, may be unique to North America so far.

How the tables have turned

Pitcher plants are well-known for eating animals — but they tend to limit themselves to insects and spiders. This smaller prey is lured into the plants’ bell-shaped leaves, where they are digested in a mixture of rainwater and enzymes. However, until now, nobody had seen these plants capture anything larger. The team found evidence of northern pitcher plants (Sarracenia purpurea purpurea L.) capturing young spotted salamanders (Ambystoma maculatum Shaw) in Canada’s oldest provincial park, Algonquin Park.

The findings are even more surprising, considering that Algonquin is a very popular destination and has been a subject of scientific observations for hundreds of years. Noting how long the park has held this secret — despite generations of visiting naturalists, its proximity to major cities and a highway running through its southern end — Smith said, “Algonquin Park is so important to so many people in Canada. Yet within the Highway 60 corridor, we’ve just had a first.”

The study was borne from a discovery made by then-undergraduate student Teskey Baldwin in 2017 during a U of G field ecology course in the provincial park: he found a salamander inside a pitcher plant. Baldwin is a co-author of the current study. When they returned to monitor pitcher plants in a single pond in the park in the fall of 2018, the team found that roughly 20% of the plants had juvenile salamanders in their pitchers, each about as long as a human finger. Several plants they looked at had more than one captured salamander.

Smith explains that the ponds in this particular bog don’t house fish, making the salamanders a key predator and prey species in the local food webs. The observations also coincided with “pulses” of young salamanders moving onto land after changing from their (aquatic) larval stage. Smith believes that the animals were either lured by insects inside the plants’ pitchers, or they may have entered them in a bid to escape predators.

Some of the trapped salamanders likely died within three days, while others may have lived up to 19 days, the team explains. After expiring, they were broken down by digestive enzymes and other organisms in the water held inside the leaf. Smith said other factors may kill salamanders in pitcher plants, including heat, starvation, or pathogens.

Doesn’t sound like a particularly pleasant fate for the salamanders — so why do the plants put them through all that? Smith says that soil in the bog is relatively nutrient-poor, especially in regards to nitrogen (which is the hard-cap on how much plants can develop in natural environments). Other flesh-eating plants also grow in nutrient-poor environments, he notes, citing sundews and the Venus flytrap.

The only other species of meat-eating pitcher plant (native to Asia) consumes mostly insects and spiders, and occasionally small birds and mice. Smith said the Algonquin Park discovery opens new questions for biologists: are the salamanders a key prey species of the plants? Are the pitcher plants the main predators of these amphibians? And do the two species compete for insects — in which case, might the salamanders outcompete the plants?

“I hope and imagine that one day the bog’s interpretive pamphlet for the general public will say, ‘Stay on the boardwalk and watch your children. Here be plants that eat vertebrates,”‘ Smith quips.

The paper “Salamanders as rich prey for carnivorous plants in a nutrient‐poor northern bog ecosystem” has been published in the journal Ecology.

Ohio University paleontologists have discovered a new species of extinct carnivore. Its lineage has been severed by the ages but, while it was alive, this massive predator was likely the terror of the eastern stretches of Africa.

Simbakubwa kutokaafrika, a gigantic carnivore known from most of its jaw, portions of its skull, and parts of its skeleton, was a hyaenodont that was larger than a polar bear.
Illustration by Mauricio Anton.

Larger than any big cat today — larger, in fact, than a polar bear — with a skull as large as that of a rhinoceros and dagger-long canine teeth, Simbakubwa kutokaafrika was a really scary part of the ecosystems occupied by early apes and monkeys 22 million years ago. The species is described in a new paper published by paleontologists from the University of Ohio based on most of its jaw, portions of its skull, and parts of its skeleton.

“Opening a museum drawer, we saw a row of gigantic meat-eating teeth, clearly belonging to a species new to science,” says study lead author Dr. Matthew Borths, who is currently the Curator of the Division of Fossil Primates at the Duke Lemur Center at Duke University.

The fossils used in this study aren’t exactly freshly-recovered. They were unearthed in Kenya decades ago by teams looking for ancient ape fossils. Simbakubwa’s fossils were placed in a drawer at the National Museums of Kenya for safekeeping and then kind of… forgotten about. Borths, alongside his Ohio University colleague Dr. Nancy Stevens recognized the significance of the fossils and set about analyzing them properly.

Simbakubwa is Swahili for “big lion”, because the animal was likely at the top of the food chain in Africa, as lions are in modern African ecosystems. The species name, kutokaafrika, is Swahili for “coming from Africa”. Yet Simbakubwa is not closely related to big cats or any other mammalian carnivore alive today. It is the oldest of the gigantic hyaenodonts. Hyaenodonts were a lineage of giant carnivores likely originated on the African continent which moved northward to flourish for millions of years.

They were the first mammalian carnivores in Africa, the team explains. For roughly 45 million years after non-avian dinosaurs disappeared, they were also the apex predators of the continent. After millions of years of near-isolation, however, Africa drifted into contact with the northern continents, enabling flora and fauna to exchange between these (previously-isolated) landmasses.

Around this time, the relatives of cats, hyenas, and dogs began to arrive in Africa from Eurasia. Meanwhile, Simbakubwa’s kin was making their way north. This would not prove to be a very savvy decision — in time, hyaenodonts worldwide went extinct.

“It’s a fascinating time in biological history,” Borths says. “Lineages that had never encountered each other begin to appear together in the fossil record.”

“We don’t know exactly what drove hyaenodonts to extinction, but ecosystems were changing quickly as the global climate became drier. The gigantic relatives of Simbakubwa were among the last hyaenodonts on the planet,” he adds.

The paper “Simbakubwa kutokaafrika, gen. et sp. nov. (Hyainailourinae, Hyaenodonta, ‘Creodonta,’ Mammalia), a gigantic carnivore from the earliest Miocene of Kenya” has been published in the Journal of Vertebrate Paleontology.