A lot of people looking to lose weight are trying low-carb diets such as Keto or Atkins, but in doing so they may be shaving years off their lifespan. According to a 25-year-long study, individuals whose diets were either low or high in carbohydrates had a higher risk of death than those who consumed a moderate amount of carbs. Another important finding was that switching meat for plant-based protein led to healthier outcomes, in people with low-carb diets.

For their study, researchers followed 15,428 American adults aged 45-64 years from 1987 until 2012. The participants had to self-report their diets, based on which the researchers estimated the proportion of calories they got from carbohydrates, fats, and protein.

Carbohydrates include foods such as fruit, vegetables, and sugar but most often people ingest the most carbs from starchy foods such as potatoes, rice, and pasta.

The researchers at the Brigham and Women’s Hospital, Boston, then compared low-carb diets rich in animal protein and fats with those that contained lots of plant-based protein and fat. They found that the latter diet slightly reduced the risk of death.

Low-carb diets that replace carbohydrates with protein or fat are becoming increasingly popular. The new study published in The Lancet, however, suggests that people ought to be more careful and shouldn’t jump on the latest diet fad before doing proper research.

Although previous randomized trials have shown low carbohydrate diets are beneficial for short-term weight loss and improve cardiometabolic risk, this study shows that low-carb dieting may shorten lifespan if done for many years.

“We need to look really carefully at what are the healthy compounds in diets that provide protection”, says Dr. Sara Seidelmann, Clinical and Research Fellow in Cardiovascular Medicine from Brigham and Women’s Hospital, Boston, USA who led the research.

“Our data suggests that animal-based low carbohydrate diets, which are prevalent in North America and Europe, might be associated with shorter overall lifespan and should be discouraged. Instead, if one chooses to follow a low carbohydrate diet, then exchanging carbohydrates for more plant-based fats and proteins might actually promote healthy aging in the long term.”

In the same study, the authors also performed a meta-analysis of data from eight prospective cohorts involving 432,179 people in North American, European, and Asian countries. The analysis revealed similar trends — participants whose diet consisted of high and low in carbohydrates had shorter life expectancy than those with moderate consumption.

“These findings bring together several strands that have been controversial. Too much and too little carbohydrate can be harmful but what counts most is the type of fat, protein, and carbohydrate,” says Walter Willett, Professor of Epidemiology and Nutrition at Harvard T. H. Chan School of Public Health and co-author of the study.

As a caveat, there are some limitations to this study. The conclusions are associations not causal relationships and the researchers had to rely on the participants to remember what they had eaten in order to determine their diets. The food questionnaire in the study may have also led some people to underestimate the calories and fat they had eaten. More research will likely follow but, in the meantime, it may be a good idea to stay away from low-carb diets.

Nowadays, people tend to blame carbohydrates for the obesity epidemic, but a new paper suggests that not all refined carbs — that are quickly absorbed into the bloodstream — make you fat. Pasta, for example, in spite of being a member of the refined carbohydrate family, has a low glycemic index (GI).

Researchers analyzed data from 30 randomized control trials involving almost 2,500 people who ate pasta, instead of other carbohydrates, as part of a healthy low-glycemic index diet.

“The study found that pasta didn’t contribute to weight gain or increase in body fat,” said lead author Dr. John Sievenpiper, a clinician scientist from the St. Michael’s Hospital’s Clinical Nutrition and Risk Modification Centre. “In fact, analysis actually showed a small weight loss. So contrary to concerns, perhaps pasta can be part of a healthy diet such as a low GI diet,” he added.

Participants involved in the trials ate on average 3.3 servings of pasta per week instead of other carbs, one serving of pasta meaning one-half cup of boiled pasta. At the 12-week follow-up, scientists observed that participants had lost 0.5 kilos on average.

“In weighing the evidence, we can now say with some confidence that pasta does not have an adverse effect on body weight outcomes when it is consumed as part of a healthy dietary pattern,” said Dr. Sievenpiper.

I, for one, couldn’t be any happier. As a pasta lover, and a health freak, this news is incredible. The only thing left for me to say is ‘Buon appetito’!

The paper was published in the journal BMJ Open.

Researchers stumbled upon a new tool to fight cancer in a rather unexpected place; while searching for a vaccine against malaria in pregnant women, a team of Danish scientists found that, simply put, armed malaria proteins are remarkably good at killing cancer cells. They hope to have a working prototype ready for human trials within four years’ time. Their discovery has been published in the scientific journal Cancer Cell. 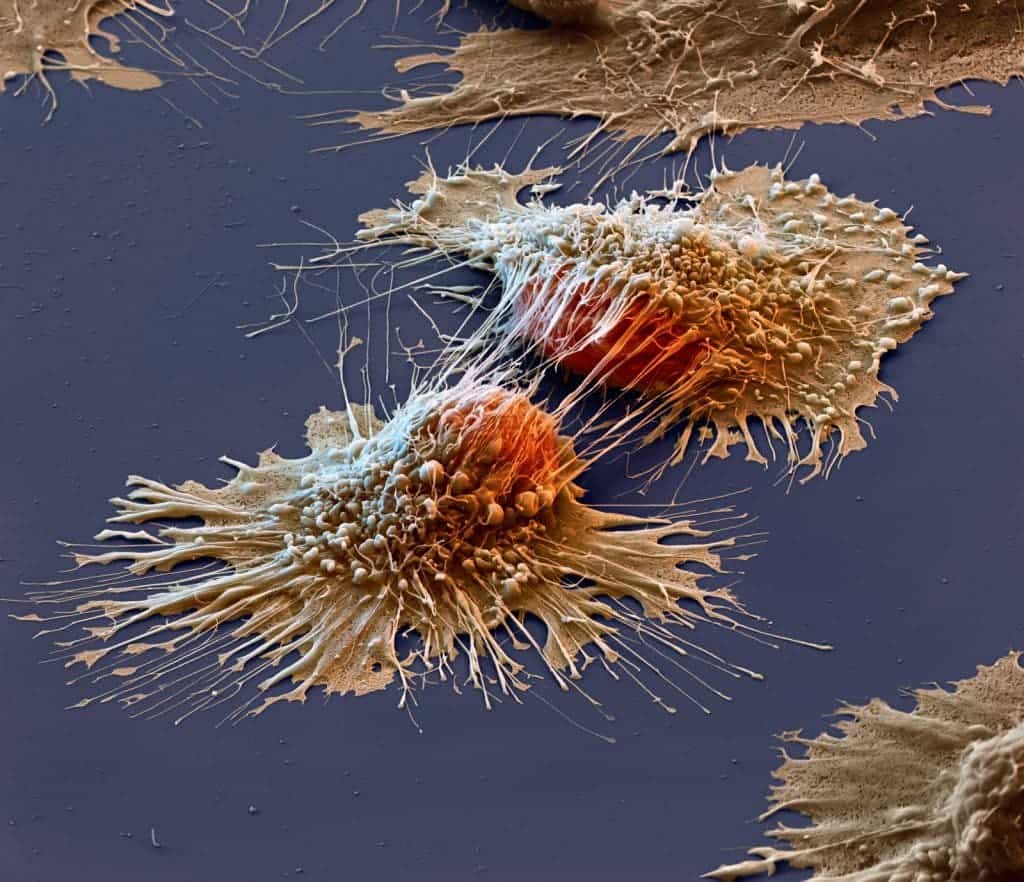 Cancer cells viewed under an electron microscope.
Image via imgur

Professor and malaria expert Ali Salanti from the Faculty of Medical Health and Sciences, working in collaboration with cancer researcher Mads Daugaard from the University of British Columbia in Canada, revealed that the specific carbohydrate that malaria parasites attach themselves to in the human placenta is identical to a carbohydrate found in all cancer cells.

Ali Salanti’s team is currently testing a vaccine against malaria on humans, and their work developing the drug led to the discovery of the carbohydrate. Salanti contacted his former fellow student and now cancer researcher, Mads Daugaard, who is head of the Laboratory of Molecular Pathology at the Vancouver Prostate Center at UBC in Canada. Seeing the potential of this finding, they went to work — in essence, the carb gave them the perfect Trojan Horse to use against the malign cells, without the risk that normal cells would be attacked.

“We examined the carbohydrate’s function. In the placenta, it helps ensure fast growth. Our experiments showed that it was the same in cancer tumors. We combined the malaria parasite with cancer cells and the parasite reacted to the cancer cells as if they were a placenta and attached itself,” says Ali Salanti from the Department of Immunology and Microbiology at the University of Copenhagen..

So they set to work on weaponizing their Horse. They isolated the protein that malaria relies on to adhere to the placenta and added a toxin to it. The theory held strong up till now, but the team needed to be sure that the system worked as intended, and tested it on cell cultures and in mice with cancer. Once inside the organism or culture, the protein-toxin combination seeks out cancer cells and binds to them, only then releasing the toxin. The cancer cell dies, and regular, hard working tax paying cells aren’t affected, win win!

“For decades, scientists have been searching for similarities between the growth of a placenta and a tumor. The placenta is an organ, which within a few months grows from only few cells into an organ weighing approx. two pounds, and it provides the embryo with oxygen and nourishment in a relatively foreign environment. In a manner of speaking, tumors do much the same, they grow aggressively in a relatively foreign environment,” Ali Salanti adds.

Working together, the two universities have tested thousands of samples, ranging from brain tumors to leukemias, and the results are encouraging — the weaponized malaria protein can attack more than 90% of all types of tumors. Another series of tests were carried out on mice implanted with three types of human tumors: one group with non-Hodgkin’s lymphoma, where the treated mice’s tumours were about a quarter the size of the tumours in the control group. For prostate cancer, the tumours disappeared in two of the six treated mice a month after receiving the first dose. With metastatic bone cancer, five out of six of the treated mice were alive after almost eight weeks, compared to none of the mice in a control group.

“We have separated the malaria protein, which attaches itself to the carbohydrate and then added a toxin. By conducting tests on mice, we have been able to show that the combination of protein and toxin kill the cancer cells,” Mads Daugaard explains.

“It appears that the malaria protein attaches itself to the tumor without any significant attachment to other tissue. And the mice that were given doses of protein and toxin showed far higher survival rates than the untreated mice. We have seen that three doses can arrest growth in a tumor and even make it shrink,” PhD student Thomas Mandel Clausen elaborates. He has been part of the research project for the last two years.

The only downside to this drug is that it can’t be prescribed to pregnant women, for obvious reasons:

In collaboration with the scientists behind the discovery, the University of Copenhagen has created the biotech company, VAR2pharmaceuticals, which will drive the clinical development forward. The research teams working with Ali Salanti and Mads Daugaard are now working towards being able to conduct tests on humans.

“The earliest possible test scenario is in four years time. The biggest questions are whether it’ll work in the human body, and if the human body can tolerate the doses needed without developing side effects. But we’re optimistic because the protein appears to only attach itself to a carbohydrate that is only found in the placenta and in cancer tumors in humans,” Ali Salanti concludes.