Engineers working in the US have found a way to extract almost 100% of the water from brine, up from 6%. This innovation can alleviate water shortages in parts of the world where water is scarce, but it can also reduce the high salinity of disposable waste (ie in hydraulic fracking).

Water shortage is no joke. As the world population continues to grow, more and more areas use water unsustainably and are almost certainly set for a future water crisis. In these conditions, desalination becomes more and more a tempting option, as Israel has been demonstrating for a few years already. Still, the process can be significantly improved, as a team from University of California, Riverside, has proven.

The team has developed a carbon nanotube heating element, vastly improving the recovery of fresh water during membrane distillation processes. Describing the new approach in the journal Nature Nanotechnology. David Jassby, an assistant professor of chemical and environmental engineering in UCR’s Bourns College of Engineering explains that previously, the recovery rate was capped at a much lower figure.

“In an ideal scenario, thermal desalination would allow the recovery of all the water from brine, leaving behind a tiny amount of a solid, crystalline salt that could be used or disposed of,” Jassby said. “Unfortunately, current membrane distillation processes rely on a constant feed of hot brine over the membrane, which limits water recovery across the membrane to about 6 percent.”

Most desalinization facilities use reverse osmosis, but the more salt you have in the water, the less efficient this process becomes. When dealing with brines, reverse osmosis becomes highly inefficient.

While such brines are rarely prevalent naturally, they are often produced as waste and must be disposed of to prevent environmental damage. What Jassby and his collaborators did not only ensure that all the water is desalinized, but it also reduces the necessary heat for the process, and thus saves a lot of energy.

The study has another interesting outcome — hot, briny water is a highly corrosive environment, and in order to develop this device, they also had to make sure that the parts can survive and operate properly for a longer period of time. Specifically, a threshold frequency was identified where electrochemical oxidation of the nanotubes was prevented.

A new paper from the University of Edinburgh shows that by banding together into biofilms, microbial communities can live far longer than isolated individuals when exposed to Mars-like brines. The bugs survived even better when dried out first, such as would happen on the surface of a spaceship in transit. 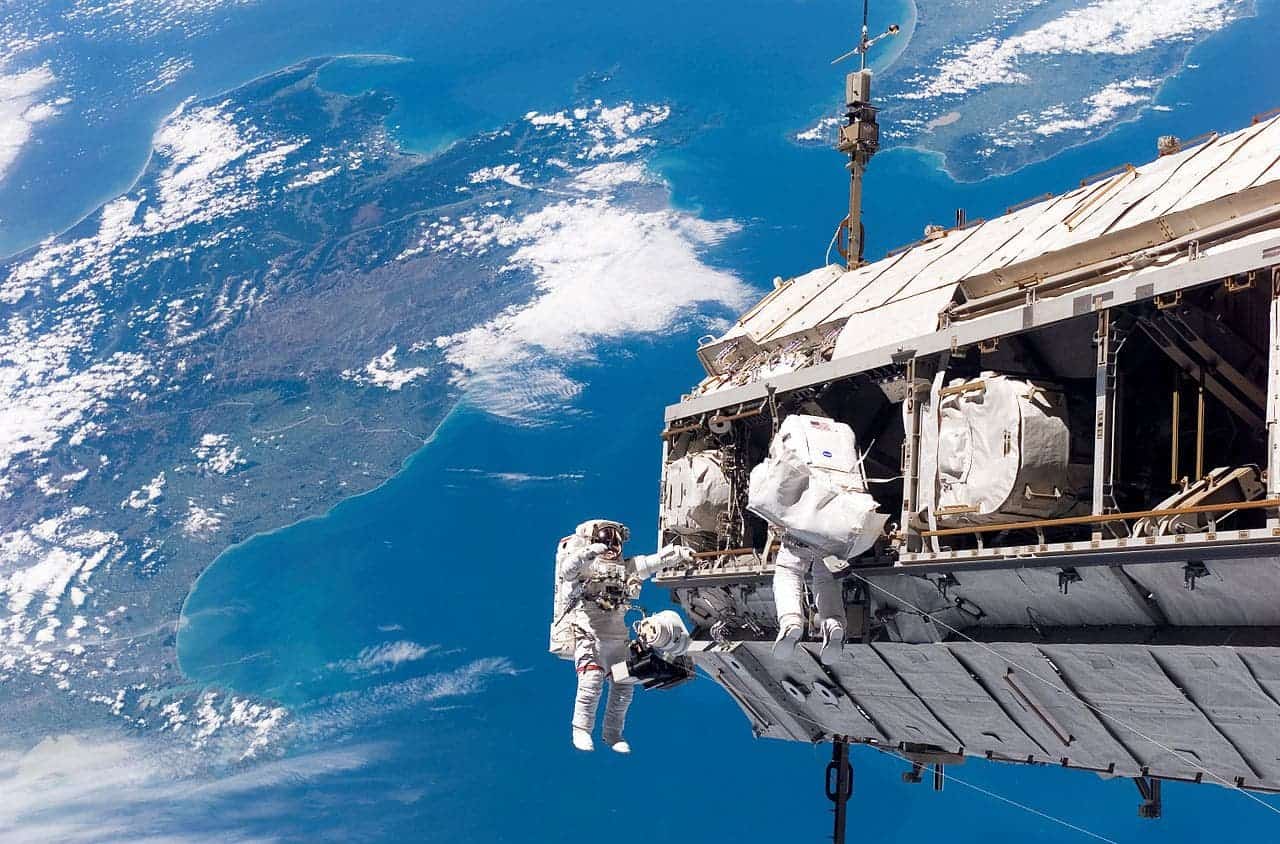 What kind of film was this picture snapped with? Biofilm.
Image credits NASA / Wikimedia.

The findings offer hope for discovering alien life, as well as showing the dangers of contaminating alien planets with Earth microorganisms.

Mostly bone-dry and with little atmosphere to protect its surface from radiation or keep temperature in check, Mars is a world decidedly hostile to life. Still, it does have some very attractive qualities. The red planet is really close (by astronomical standards) to Earth and harbors ice caps — even seasonal streams of liquid water. So a lot of people have their sights set on Mars for potential colonization. Even more, in the end Mars may surprise us with its own indigenous life — which would be great.

One problem arises however. Every time we send a craft to the planet, we run the risk of infecting/seeding it with microorganisms from Earth. If these get a foothold on Mars, they could endlessly frustrate scientists trying to determine the planet of origin — or they could overtake the native inhabitants altogether. But are microbes even capable of surviving the trip through space, and then on Mars?

A new research paper by Dr Adam Stevens at the University of Edinburgh and colleagues shows that biofilms (colonies protected by a slime-like casing) can survive for long periods of time in Mars-like brines — even longer if they’ve been dried out by space-flight first.

The team submerged biofilm samples in seven brines of various chemical compositions and concentrations. In the most diluted brines, all of the biofilms survived well past the 5-hour observation time. In more concentrated brines (the last being 70 times as salty as the weakest one), desiccated biofilms survived for much longer than those whose water content wasn’t altered.

Alien invasion with a twist

After an initial shock, these dried out biofilms actually started to grow — presumably in an effort to protect themselves from the environment, the team writes. This may be caused by cells communicating through the biofilm, with cells exposed on the outside layer sending warning signals to those further down in the colony. These insulated cells could then either produce more insulating slime, or reproduce more quickly and build the barrier through sheer numbers.

Still, 5 hours into the experiment, all the microbes in the dried biofilms were dead. The hydrated biofilm cells didn’t even make it to the one hour mark, with some samples dying out in under half an hour.

This research helps us better understand how to look for, and protect, possible alien life. Areas on Mars that have water are the most likely spots for finding alien life, so they’re designated as ‘special regions’ by the international Committee on Space Research. At the same time, these characteristics also make them the most readily-contaminated spots on the planet. Stevens’ research shows that biofilms could allow microorganisms to survive in these conditions. This means that in case of contamination, it would be impossible to study special regions with any semblance of accuracy — so we should be very careful when sending any drones or rovers to these areas.

The same paper also shows there’s hope in finding life nestled in Mars’ briny slopes, as well as on the moons further out in the solar system.

“This research gives us some information about what we could possibly look for if we do go and investigate these brines – which, on the flip side, we’re saying maybe we shouldn’t,” says Stevens.

“To me, this is a kind of a call to pick up the baton of this area that we really need to understand as we launch into an era of space travel,” says Jennifer Macalady at Penn State University in University Park.

The full paper “Biofilms Confer Resistance to Simulated Extra-terrestrial Geochemical Extremes” has been published in the journal bioRxiv.

Oceanographers believe that Antarctica‘s oceanic waters, which are turning from briny to fresh in recent decades, are causing the shutdown of the Southern Ocean’s coldest, deepest currents.

The cold currents, called the Antarctic Bottom Water, are basically cold, briny, underwater rivers flowing from the underwater edge of the Antarctic continent north toward the equator, very close to the seafloor. They carry oxygen, carbon, and many nutrients to the depths of the ocean, and play a huge role in the survival of creatures which live close to the seafloor. It has already been shown in the past years that the effects of this current are shrinking, but it was unclear if this is a man-caused, or if it is simply a natural process.

This new study concludes that Antarctica’s changing climate is to blame for the shrinking Antarctica Bottom Water. Here’s what happens, at a very basic level: we’re dealing with a global warming situation. The higher temperatures cause ice to melt, and they also cause increased precipitations (both rain and snow) in the Antarctic areas. The melting glaciers and precipitation bring a massive influx of sweet water which slowly replaces the briny, oceanic water in the area. Since the fresh and briny water have different densities and somewhat different chemical properties, this prevents the currents from taking their normal course.

“Deep ocean waters only mix directly to the surface in a few small regions of the global ocean, so this has effectively shut one of the main conduits for deep-ocean heat to escape,” said Casimir de Lavergne, an oceanographer at McGill University in Montreal.

The key part of the chain here are polynyas – natural holes surrounded by sea ice. These persistent regions of open water form when upwellings of warm ocean water keep water temperatures above freezing, acting pretty much like natural refrigerators – they absorb the cold temperatures, the water gets colder (higher density), and drops to the bottom, sending hotter water in its stead, creating a current.

But as Antarctica’s water freshened, fewer and fewer polynyas appeared – specifically because freshwater is less dense, and even if it gets colder, it doesn’t sink to the bottom. It acts like a lid, sealing off the current and shutting down oceanic circulation.

“What we suggest is, the change in salinity of the surface water makes them so light that even very strong cooling is not sufficient to make them dense enough to sink,” de Lavergne told ZME Science. “Mixing them gets harder and harder.”

De Lavergne cautioned that the heat-storage effect is localized to the Antarctica area, and it’s not connected to the so-called global warming “hiatus” – the observed slowing down of global warming, even with increased energies in the system.

“Our study is still a hypothesis,” he added. “We say that climate change is preventing convection from happening, but we do not know how frequent it was in the past, so that’s a big avenue for future research.”

However, even as just a hypothesis, this is a worrying conclusion; oceanic anoxia is not a laughing matter, and it’s just another evidence that this global warming we are causing has significant and sometimes unexpected effects all around the world.