It’s never pleasant to come into contact with a pollutant, but BPA might be even worse for the environment than we thought. 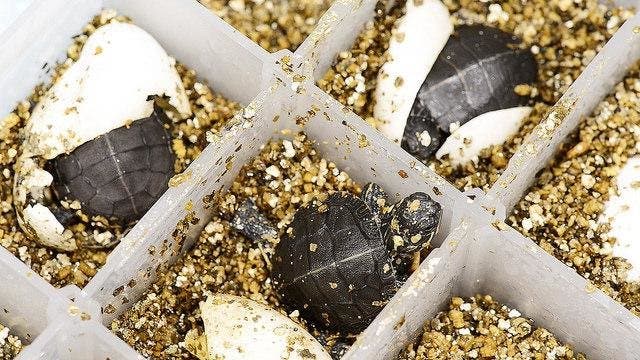 Painted turtle eggs were brought from a hatchery in Louisiana, candled to ensure embryo viability and then incubated at male-permissive temperatures in a bed of vermiculite. Those exposed to BPA developed deformities to testes that held female characteristics. Image credits: Roger Meissen, MU Bond Life Sciences CenterClose.

Bisphenol A (typically abbreviated BPA) is a common chemical used in a variety of consumer products, including food storage containers, water bottles and certain resins. It’s been in commercial use since the late 1950s. BPA exhibits estrogen mimicking, hormone-like properties that raise concern about its effects on the environment, and it also affects the growth, reproduction, and development in aquatic organisms, fish being the most vulnerable. Now, researchers have found yet another negative effect the chemical has on wildlife: it can really mess up the brains of turtles.

Turtles are often regarded as an “indicator species,” being indicative of the environmental health of the entire ecosystem. So if something’s wrong with turtles, it could be that similar things are happening to other species in the same habitat. Cheryl Rosenfeld, an investigator in the Bond Life Sciences Center, along with other researchers at the University of Missouri, Westminster College and the Saint Louis Zoo, set out to see how BPA (a common pollutant) affects the turtles. Startingly, researchers report that the chemical can have a severe effect on their brains and behavior, making male turtles act like females and vice versa.

“Painted turtles lack sex chromosomes, and their gender is primarily determined by the incubation temperature of the egg during development–cooler temperatures yield more males while warmer temperatures yield more females,” said Rosenfeld, who also is an associate professor of biomedical sciences in MU’s College of Veterinary Medicine. “Previously, our research team found that exposure to BPA might override the brain development of male turtles and could induce female type behaviors. Our goal for this research was to determine the genetic pathways that correlate to the behavioral changes we identified.”

Rosenfeld wanted to see exactly how BPA does this, and she found that it basically affects the turtles’ gene expression, altering their mitochondrial and ribosomal pathways. Since the mitochondria are the powerhouse of the cell and convert nutrients into useful energy, BPA can change a lot of things. For instance, increased energy production inside brain cells can affect cognitive flexibility and memory. However, we’re only beginning to understand how this type of substance can damage the environment because we don’t know that much about cellular mechanisms and gene expressions in creatures like turtles.

“Metabolic pathways are not well documented in turtles. We were able to use human metabolic models to infer pathway changes in turtles,” said Scott Givan, associate director of MU Informatics Research Core Facility and a co-author of the study. “After analyzing the genes, we were able to link gene expression changes to behavioral changes.”

This is the first study to find a correlation between pollution, gene expression patterns, and behavioral changes in turtles. Although this is a newly discovered mechanism, researchers were able to show that the effects last for at least a year, and they believe that the damage BPA does to the critters might even be permanent.