Bowhead whales may be the unsung heroes of the musical world. 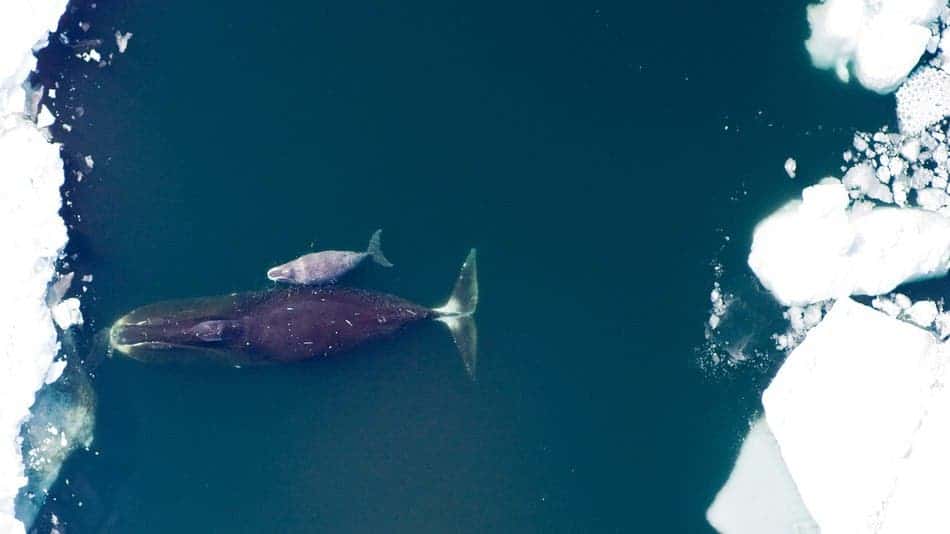 Audio recordings taken from 2010 through to 2014, off the coast of Greenland, captured 184 distinct songs from a population of around 300 whales. According to a new paper from the University of Washington (UW), they produce some of the most diverse and complex song patterns of any mammal.

“If humpback whale song is like classical music, bowheads are jazz,” says Kate Stafford, an oceanographer at the UW’s Applied Physics Laboratory and lead author of the study.

“The sound is more freeform. And when we looked through four winters of acoustic data, not only were there never any song types repeated between years, but each season had a new set of songs.”

Bowhead whales are one of the less known species of whale out there, especially compared to their cousins, the humpbacks. In part, this comes down to their neighborhood of choice: they are the only baleen whales that spend all year in the Arctic. It’s also a problem of numbers. Bowhead whales grow to more than 18 meters in length, have thick blubbert, don’t swim very fast, and float after death — so they made prime targets for whalers, which nearly drove them extinct in the mid 19th century.

Luckily for us, in 1977 the International Whaling Commission prohibited the hunting of bowhead whales except for subsistence purposes. If it hadn’t, we would have killed off one of the most creative singers in the natural world, new research shows. The study published the largest set of bowhead whale song recordings, showing the surprisingly diverse repertoire these mammals employ. The recordings — captured year-round from 2010 to 2014 east of Greenland — include 184 different songs in a population of roughly 300 whales. Together with a previous study, which reported that the whales sang continuously during the winter breeding season in 2012, the findings point to a recovering, but healthy population of whales.

“Bowhead whales were singing loudly, 24 hours a day, from November until April. And they were singing many, many different songs,” Stafford recounts of the previous study.

Here are a few samples (not from this study):

The new paper extends on the initial, five-month recording period. The team used hydrophones (underwater microphones) to take roughly 1,000 recordings each season and were surprised to hear just how varied the whales’ songs were over time. The only other whales we know that sing elaborate songs, the humpback whales, share a single song throughout all the males in a community. The tune shifts slightly during the winter breeding season, and each population debuts a new tune in the spring. 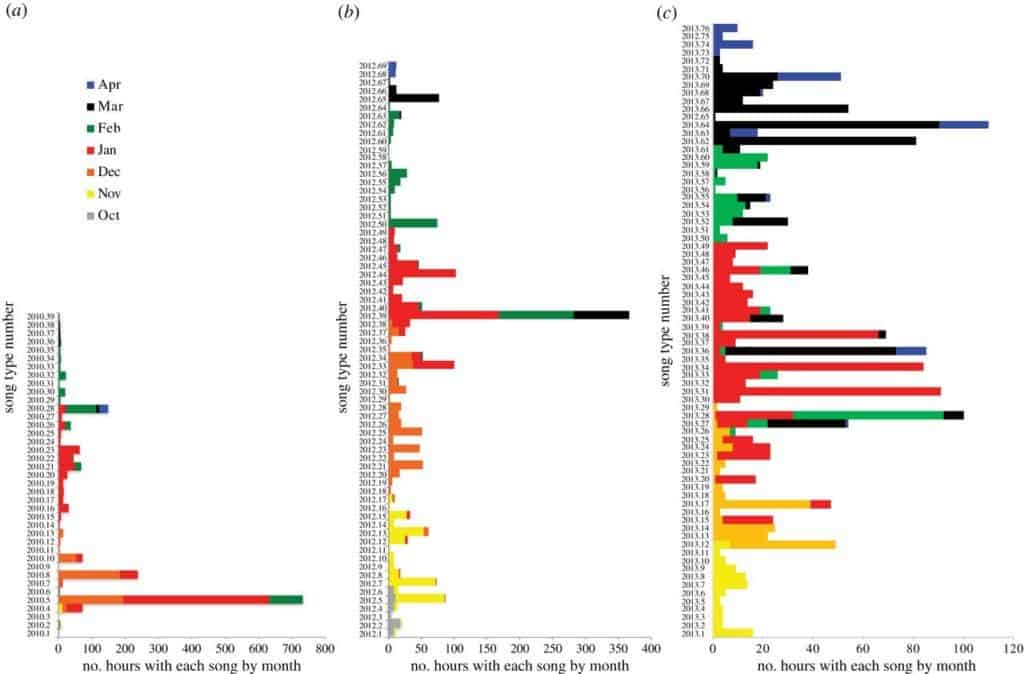 The total number of hours and months during which each song type was recorded by year. Most song types were only recorded in one month.
Image credits K. M. Stafford, C. Lydersen, Ø. Wiig, K. M. Kovacs / Biology Letters.

“It was thought that bowhead whales did the same thing, based on limited data from springtime,” Stafford said. “But those 2008 recordings were the first hint, and now this data confirms that bowhead whale songs are completely different from the humpbacks’.”

Animal songs differ from calls in their complexity; they are whole musical compositions that have to be learned. While animals such as birds use songs as a means to signal other individuals, or to draw attention upon themselves (very useful in the mating season), whales also do it out of practicality. Marine mammals rely on sound instead of sight to navigate, hunt for food, and communicate in their often-dark environments.

The findings suggest that bowhead whales are similar to birds such as cowbirds and meadowlarks, learning and improvising a diverse repertoire of songs. We don’t know why they do so, although it’s likely the novelty offers some advantage, perhaps in courting. Then again, it’s possible the whales just like to get creative.

“Bowhead whales do this behavior in the winter, during 24-hour darkness of the polar winter, in 95 to 100 percent sea ice cover. So this is not something that’s easy to figure out,” Stafford said. “We would never have known about this without new acoustic monitoring technology.”

The paper “Extreme diversity in the songs of Spitsbergen’s bowhead whales” has been published in the journal Biology Letters.