Why aren’t the fastest animals on Earth also the biggest? That might sound like a silly question but you’ll be surprised to learn scientists have been trying to answer it for decades. This non-trivial problem is very important because understanding the limits of locomotion also tells us how animals interact with their environments, how they migrate, and, ultimately, how well they can adapt to climate change. Now, German researchers have finally found an acceptable theoretical framework that can predict the speed limits of any given animal, from fruit flies to blue whales, by measuring body size alone. 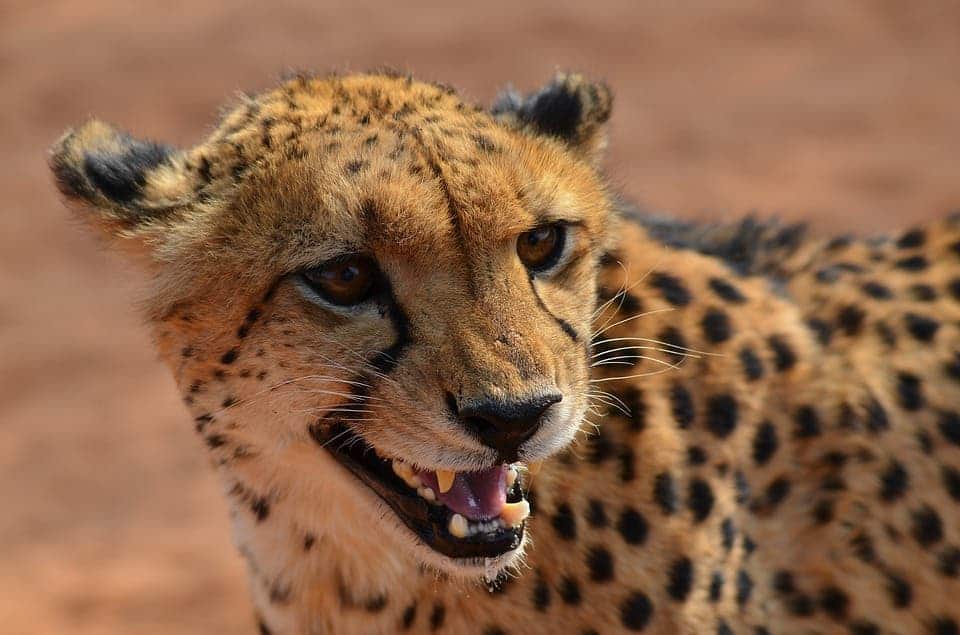 At a top speed of 120 km/h, the cheetah (Acinonyx jubatus) is the fastest land based animal in the world. Credit: Pixabay, UGVERTRIEB.

A human step travels a far greater distance than that of a mouse, as does an elephant’s step compared to a human. At the same time, it’s obvious that the biggest animals aren’t the fastest. For instance, the cheetah, which is the fastest land animal, and the peregrine falcon, the fastest bird, are far from being the biggest animals in their class. Speed is a measure of how far a body moves in a given time frame. It follows that, ultimately, what determines an animal’s speed is not only how far a single cycle of movement gets you but also how frequently these cycles occur.

Over the years, scientists have proposed various explanations to account for why larger animals are slower than smaller species, ranging from morphological constraints to how adapted bones and muscles are to the strain of high-speed locomotion. The trick is that these explanations have to apply uniformly across all species of animals, which has so far always proven frustrating. Hirt and colleagues, however, seem to have done it. What’s more, their framework can accurately predict the speed limit of terrestrial animals as well as aquatic or flying ones based solely on body size.

Essentially, the new hypothesis is based on the notion that animals can sustain acceleration for only so long from a starting point. When this critical maximum value is reached, we’ve reached top speed. To accelerate, an animal must release the chemical energy stored in cells into mechanical energy by metabolization in fast-twitch muscle fibers. The fast-twitch fibers can contract and bend for as long as they have fuel so the time available for acceleration corresponds to the number of these muscle fibers. 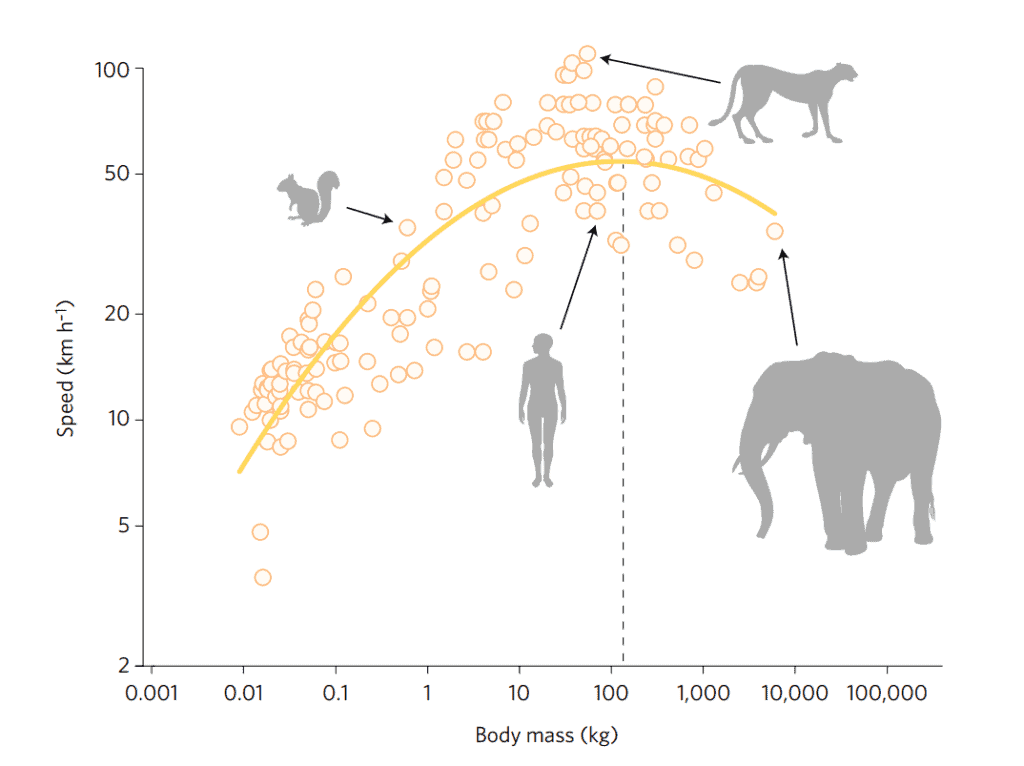 Large animals have more fast-twitch muscle fibers compared to smaller species but, at the same time, they also take longer to reach any given absolute speed compared to smaller species. This interplay of factors means there’s a threshold beyond which the time required to accelerate to faster speeds will exceed the finite amount of time available for acceleration. In other words, large animals run out of fuel before they get the chance to reach the desired speed. This explains the inverted U-shaped pattern across species that scientists have long ago established.

When 474 animal species ranging from mollusks to whales were modeled, the outputs were a good fit to the predictions that maximum speed drops off steeply as animals grow beyond intermediate sizes. Bearing this model in mind, it’s animals of an intermediate size such as the cheetah or falcon that are the fastest despite having smaller muscles or fewer muscle fibers than their larger counterparts. Yet the model is still not perfect since there are some variations in locomotion performance among similarly sized animals. For instance, humans are near the peak of the model’s predictions for terrestrial locomotion yet we fall dismally short of this prediction in the real world.

The findings will prove useful for scientists who are busy studying various ecosystems and how these interact with one another. Building on Hirt’s model, scientists might also be able to tease answers to other pressing questions bugging biologists. For instance, land and air-based endotherms are typically faster than ectotherms of similar size but in aquatic environments, this pattern is reversed.

A new study from anthropologists at University of Tennessee analyzed the skulls of caucasian American men and women from between the mid-1800s to the mid-1900s. Their findings showed that the average American’s skull today is larger and narrower than it used to be seven generations ago.

In total, over 1,500 skulls have been analyzed, and though humans are taller, in general, than they used to be, say a hundred or two hundred years ago, the growth in skull size is disproportional to the rest of the body, suggesting other factors are at work.

“It likely results from modified growth patterns because of better nutrition, lower infant and maternal mortality, less physical work, and a breakdown of former ethnic barriers to marriage. Which of these is paramount we do not know.”

The researchers found that the average height from the base to the top of the skull in men has increased by eight millimeters, or about a third of an inch, resulting in an increase in skull volume of around 200 cubic centimeters ~ just about that of a tennis ball. In women, the corresponding increases are seven millimeters and 180 cubic centimeters.

Are American brains getting bigger too? Well, for one brain size had been found to be correlated with skull size in previous studies, but this has not been proven yet, given the short supply of 1800s brains, probably…

Is the increase in skull size part of a larger pattern of the human body growing in general? Like I said earlier, humans have grown taller than they used to. Body height has increased by 5.6 percent and femur length by two percent, the UT study shows, while skull height  has increased 6.8 percent since the late 1800s. Also the study found that Americans are maturing faster than before. A separation in the bone structure of the skull called the spheno-occipital synchondrosis, which in the past was thought to fuse at about age twenty, is now fusing much earlier – 14 for girls and 16 for boys.

“This might affect skull shape by changing the hormonal environment, which in turn could affect timing of growth and maturation,” says professor emeritus  Richard Jantz.

“We know it has an effect on the long bones by increasing muscle attachment areas, increasing arthritis at certain joints, especially the knee, and increasing the weight-bearing capacity.”

Previous studies have also revealed an increase in skull size among European populations, however not this significant. The team of researchers presented their findings at the American Association of Physical Anthropologists meeting in April.