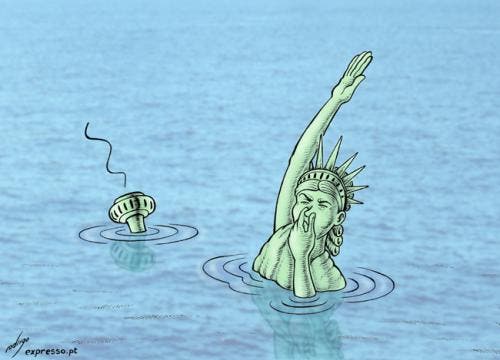 It is no longer a question if multi-meter sea level rises will happen, but only of when. According to the latest estimate from the Arctic Monitoring and Assessment Programme it seems the accelerated climate change in the Arctic including a thaw of Greenland’s ice could raise world sea levels by up to 1.6 meters by 2100.

“The past six years (until 2010) have been the warmest period ever recorded in the Arctic,” according to the Oslo-based Arctic Monitoring and Assessment Programme (AMAP), which is backed by the eight-nation Arctic Council.

“In the future, global sea level is projected to rise by 0.9 meters (2ft 11in) to 1.6 meters (5ft 3in) by 2100 and the loss of ice from Arctic glaciers, ice caps and the Greenland ice sheet will make a substantial contribution,” it said. The rises were projected from 1990 levels.

“Arctic glaciers, ice caps and the Greenland ice sheet contributed over 40 percent of the global sea level rise of around 3 mm per year observed between 2003 and 2008,” it said.

Back in 2007 the United Nations’ Intergovernmental Panel on Climate Change (IPCC) reported that they estimate an increase of sea levels between 18 and 59 cm by 2100, however these conservative numbers did not take in consideration the drastic acceleration of thaw in the arctic.

“It is worrying that the most recent science points to much higher sea level rise than we have been expecting until now,” European Climate Commissioner Connie Hedegaard told Reuters.

“The study is yet another reminder of how pressing it has become to tackle climate change, although this urgency is not always evident neither in the public debate nor from the pace in the international negotiations,” she said.

The UN is currently in entangling talks on how they can battle the increase in temperature and sea levels, but progress is sluggish described at best. But the climate doesn’t wait, actually it’s said the Arctic Ocean could be nearly ice free in summers within 30 to 40 years, earlier than projected by the IPCC.

As reflective ice and snow shrink, ever bigger areas of darker water or soil get exposed filled with black carbon or soot. Those dark regions are extremely dangerous for the polar caps, as they soak up ever more heat from the sun, in turn stoking a melt of the remaining ice and snow.

“There is evidence that two components of the Arctic cryosphere — snow and sea ice — are interacting with the climate system to accelerate warming,” th IPCC said.

The AMAP report was due for release on Wednesday but AMAP officials released it a day early after advance media leaks. 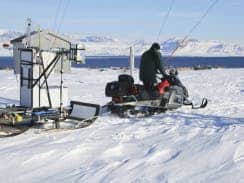 An international research team is exploring the Arctic in search of soot. Carbon deposited there as a result of activities elsewhere can have a long-term impact on climate. (Associated Press)

An international research team is in the land of snow and ice, in search of soot or black carbon, in an effort to judge whether or not it is responsible for the alarming rapid warming in the area lately. The research team includes scientists from Norway, Russia, Germany, Italy, and China, whose members are working from Norwegian islands inside the Arctic Circle, about halfway between Norway and the North Pole.

Scientists believe a thin layer of soot is causing the Arctic caps to absorb more heat, which is produced by vehicle engines, aircraft emissions, burning forests and wood- and coal-burning stoves.

“Carbon is dark in color and absorbs solar radiation, much like wearing a black shirt on a sunny day. If you want to be cooler, you would wear a light-colored shirt that would reflect the sun’s warmth,” said Tim Bates, a research chemist at NOAA’s Pacific Marine Environmental Laboratory (PMEL) in Seattle and co-lead of the U.S. component of the study.

“When black carbon covers snow and ice, the radiation is absorbed, much like that black shirt, instead of being reflected back into the atmosphere,” explained Bates.

The study’s goals are to coordinate more than a dozen research activities so they are done in tandem providing, for the first time, a vertical profile of black carbon’s movement through the atmosphere, its deposition on snow and ice surfaces, and its affect on warming in the Arctic.

“The Arctic serves as the air conditioner of the planet,” said Patricia Quinn of the National Oceanic and Atmospheric Administration (NOAA), and research chemist at Pacific Marine Environmental Laboratory (PMEL).

Heat from across the world moves towards the Arctic through air and water and at least some of that can radiate into space.  This is while the ice and snow reflect the sun’s incoming heat to other parts of the Earth, making the poles cooling systems for the planet. Soot, however, could prove to be an extremely dangerous phenomenon.

In recent years, the Arctic has been warming more rapidly than other areas of the planet, a lot faster actually since over the past 100 years, the Arctic surface air temperature has increased twice as fast as the global average. It’s important to note that the “warming of the Arctic has implications not just for polar bears, but for the entire planet,” Quinn told the Associated Press (AP).

Authors of the study believe the Arctic warming would implicate the entire planet and that cutting carbon dioxide and other greenhouse gases would effectively resolve the issue.  However, studies say that reducing the amount of short-lived pollutants, like soot, would be faster since greenhouse gases live much longer in the atmosphere.

The Norway research will continue through mid-May. The teams then will spend months analyzing their data and report the results at scientific meetings and in journals in the near future.