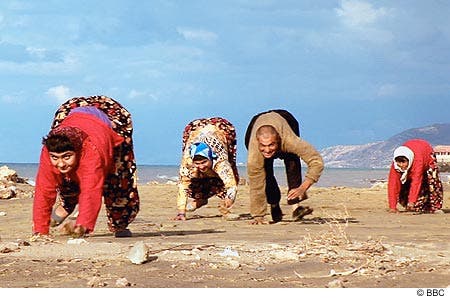 In 2006 , the BBC aired a fascinating documentary that featured that featured a family of five siblings from a remote corner of Turkey that remarkably solely moved about by walking on all fours. Many anthropologists of the time saw this behavior as evidence of reverse evolution and sought to extensively study the phenomenon in order to gain insights on how human bipedal locomotion can to be. Researchers from the US, however, claim they have proof that the family that walks on all-fours, as they’re commonly referred to in literature, simply adapted to an unfortunate neurological syndrome and their behavior does not constitute backward evolution.

At the time of their discovery, Uner Tan of Cukurova University asserted that the family members’ condition,  called Uner Tan Syndrome (UTS), acts like a model for reverse evolution, mimicking the way non-human primates, like monkeys or apes, move about. This view, while it gained considerable traction, has been repeatedly countered by studies which found people with UTS simply adapted to the impaired ability to walk bipedally.

The team, comprised of researchers at Northeast Ohio Medical University, University of Arizona, New York University, carefully analyzed footage of 518 quadrupedal walking strides and compared them to walking patterns of healthy adults who were asked to move around a laboratory on all fours. More than 98% of participants, whether they were asked to walk on all fours or were forced to because of UTS, walked in lateral sequences – they placed a foot down, then the corresponding hand from the same side, before performing the same sequence on the other side. Non-human primates, however, use what’s called a diagonal quadruped sequence,  in which they put down a foot on one side and then a hand on the other side, continuing that pattern as they move along.

“Although it’s unusual that humans with UTS habitually walk on four limbs, this form of quadrupedalism resembles that of healthy adults and is thus not at all unexpected,” says  Liza Shapiro, an anthropologist at The University of Texas at Austin. “As we have shown, quadrupedalism in healthy adults or those with a physical disability can be explained using biomechanical principles rather than evolutionary assumptions.”

Comparison of footfall sequence in primate (baboon, above) and nonprimate (cat, below). Footfall sequence is depicted numerically, beginning with the right hind limb in each animal. The primate is walking in diagonal sequence (RH-LF-LH-RF), and the nonprimate is walking in lateral sequence (RH-RF-LH-LF). Image from Muybridge E (1887) . Animal Locomotion: An Electro-photographic Investigation of Consecutive Phases of Animal Movements, 1872-1885: 112 Plates. Published under the auspices of the University of Pennsylvania.

The researchers believe initial research in favor of reverse evolution was misguided by confusing  diagonal sequence with diagonal couplets. Sequence refers to the order in which the limbs touch the ground, while couplets (independent of sequence) indicate the timing of movement between pairs of limbs. People with UTS more frequently use diagonal couplets than lateral couplets, but the sequence associated with the couplets is almost exclusively lateral.

Findings were reported in the journal PLOS ONE.