Researchers in the UK have devised a bandage-like biomaterial that transplants stem cells into severe bone fractures. The easily applied bandage significantly speeds up the healing process, improves recovery, and reduces the risk of infections and poor outcomes for very serious injuries.

The biomaterial developed at King’s College London simulates structures that are part of healthy human bones. The bandage can then be stuck to a fracture like a plaster, amplifying the natural healing process.

In order to speed up bone healing, the bandage is coated in a protein involved throughout the body in the growth and repair of tissue. Additionally, the material grows bone cells from stem cells in a 3-D gel embedded in the bandage. When the bandage is patched to a fracture, these bone cells are transplanted to the site of injury.

Most broken bones do not require intensive medical care. Typically, doctors will put a broken arm or leg into a cast. The cast doesn’t heal broken bones on their own, but rather hold the affected area in place so the bone heals naturally and straight.

In particularly severe fractures, surgery is often necessary. Sometimes, doctors will insert metal pins and other implants to hold everything in place while the bone heals. Other times, instead of synthetic implants, bone is taken from elsewhere in the body for transplant at the site of injury.

However, following a serious injury, the body’s ability to heal is weakened. This is particularly true for the elderly.

This is why a ‘bone-like bandage’ is appealing: it supports and accelerates the healing of bone fractures without the need for synthetic implants. It is also biocompatible and safe as the researchers designed it to specifically target fracture sites, so it does not leak to healthy tissue.

“Our technology is the first to engineer a bone-like tissue from human bone stem cells in the lab within one week, and successfully transplant it in the bone defect to initiate and accelerate bone repair. The concept of the 3D-engineered tissue and the bandage has the potential to be developed to different injured tissues and organs,” first author Dr. Shukry Habib, from King’s College London, said in a statement.

The findings were reported in the journal Nature Materials.

A team of researchers reporting in the American Chemical Society developed a set of bandages that change their color by sensing drug-resistant and drug-sensitive bacteria in wounds, also treating them accordingly.

Xiaogang Qu from the University of Science and Technology of China and a group of colleagues created a material that goes from green to yellow by contacting the acidic microenvironment caused by a bacterial infection. The material is incorporated into the bandage and releases an antibiotic that kills the drug-resistant bacteria.

“We constructed a portable paper-based band-aid (PBA) which implements a selective antibacterial strategy after sensing of drug resistance. The colors of PBA indicate bacterial infection (yellow) and drug resistance (red), just like a bacterial resistance colorimetric card,” the researchers wrote.

The bandages turn red in color if in the presence of a drug-resistant bacterium, all thanks to the action of an enzyme produced by said microbes. When that happens, the researchers shine light on the bandage, which causes the release of reactive oxygen species that kill or weaken the bacteria.

“Compared with traditional PDT-based antibacterial strategies, our design can alleviate off-target side effects, maximize therapeutic efficacy, and track the drug resistance in real-time with the naked eye. This work develops a new way for the rational use of antibiotics,” the researchers wrote.

Thanks to their work, the team proved that the bandage speeds up the healing of wounds in mice that had been infected with drug-sensitive or drug-resistant bacteria. Now, the challenge will be to expand its use to practical applications, which the teams believes possible due to the low cost and the easy operation of the device.

This is not the first time a smart band-aid is developed for diverse applications. Researchers in Zurich developed a type of bandage that simultaneously repels blood and promotes clotting, while researchers in the US are looking at synthesizing spider silk for a new time of bandage.

Smart phones, smart tvs, smart cars, it’s a trend that’s picking up more and more and for good reason — from making work easier, entertainment more accessible and increasing safety, automation is the name of the game. And the latest member to join club Smart is a bandage designed by MIT associate professor Xuanhe Zhao:

This sticky bandage is made out of a hyrdogel matrix, a stretchy rubbery material that’s actually mostly water. It can bond strongly to materials such as gold, titanium, aluminium, glass, silicone or ceramic.

As seen in the picture above, the bandage can incorporate varied sensors, LED lights and other electronic equipment. Zhao also designed tiny and just-as-stretchy drug-delivering reservoirs and channels to be incorporated into the material.

“If you want to put electronics in close contact with the human body for applications such as health care monitoring and drug delivery, it is highly desirable to make the electronic devices soft and stretchable to fit the environment of the human body,” Zhao said.

This allows the “smart wound dressing” to be fitted to any area of the body where it’s needed, and to deliver medicine to the patient without the need for a human nurse or doctor. The prototype Zhao tested was fitted with heat sensors and LEDs, and programmed to administer the stored drug when the patient developed a fever.

However, the bandage’s uses are only limited by the electronics we can fit into it.

The LEDs can be programmed to light up if a drug is running low, or in response to changes in the patient — increased or lowered blood pressure, increases in temperatures, and so on.

Zhao says that the electronics in the bandage aren’t limited to the surface of the patient’s skin either. The hydrogel can be used to fix sensors inside the body, such as implanted bio-compatible glucose sensors or even soft, compliant neural probes.

And you can even use it to bandage traditionally tricky, flexible areas such as elbows or knees — the gel stretches with the body and keeps the devices inside functional, intact and where they’re needed.

Finally, a bandage worthy of the tech-savvy!

The study was published in the journal Advanced Materials.

All image credits go to techweeklynews 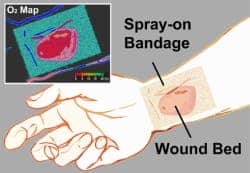 An interdisciplinary  team of researchers has created a paint-on, see-through, “smart” bandage that glows to indicate a wound’s tissue oxygenation concentration. Oxygenation plays a crucial role in healing, so mapping it in severe wounds and burns can help to significantly improve the success of surgeries to restore limbs and physical functions.

“Information about tissue oxygenation is clinically relevant but is often inaccessible due to a lack of accurate or noninvasive measurements,” explained lead author Zongxi Li, an HMS research fellow on Evans’ team.

This bandage doesn’t only enable this in a non-invasive way, but does so three simple, compact and inexpensive components:

Furthermore, the bandage is quite easy and painless to take off.

“The bandage comes off easily – the liquid bandage dries into a tacky gel underneath a plastic layer; the entire bandage comes off with simple peeling. We experimented on 20/1000 of an inch skin grafts, which are almost see-through and very fragile, and found that the bandage could be applied and removed without causing any damage”, team leader Conor L. Evans at the Wellman Center for Photomedicine of Massachusetts General Hospital (MGH) and Harvard Medical School (HMS) said on Reddit.

How the smart bandage works 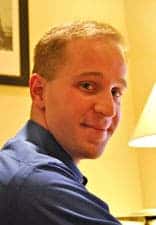 The bandage is applied like a viscous liquid which then solidifies in less then a minute. After it has dried, a transparent barrier layer is then applied atop it to protect the film and slow the rate of oxygen exchange between the bandage and room air, making the bandage sensitive to oxygen coming from only inside the skin. Oxygenation is very important in dealing with wounds.

“Oxygen plays an important role in wound healing, as it is essential to biological functions such as cell proliferation, immune responses and collagen synthesis. Poor oxygenation is directly associated with the development of chronic ischemic wounds, which affect more than 6 million people each year in the United States alone at an estimated cost of $25 billion”, the authors write.

The key to the glow is phosphorous – an element which can absorb light wavelengths and then release them, glowing. The more oxygenation, the stronger they glow.

“How brightly our phosphorescent molecules emit light depends on how much oxygen is present,” said Li. “As the concentration of oxygen is reduced, the phosphors glow both longer and more brightly.”

The last element is a camera-based readout device which does two things: triggers the emission of the phosphors inside the bandage and then monitors the phosphorous emission.

“Depending on the camera’s configuration, we can measure either the brightness or color of the emitted light across the bandage or the change in brightness over time,” Li said. “Both of these signals can be used to create an oxygenation map.”

The applications of such a bandage are pretty straightforward – they could monitor the developments of severe wound and burns, especially in ischemic (restricted blood supply) conditions, postoperative monitoring of skin grafts or flaps, and burn-depth determination. The fact that this can be done cheaply and in a non-invasive way make it all the more betteer.

“The need for a reliable, accurate and easy-to-use method of rapid assessment of blood flow to the skin for patients remains a clinical necessity,” said co-author Samuel Lin, an HMS associate professor of surgery at Beth Israel Deaconess Medical Center. “Plastic surgeons continuously monitor the state of blood flow to the skin, so the liquid-bandage oxygenation sensor is an exciting step toward improving patient care within the realm of vascular blood flow examination of the skin.”

But even though the achievement is remarkable in itself, the team is already working on future developments.

They are also working on revealing other parameters aside for oxygenation – such as pH, bacterial level and specific disease markers.

“In the future, our goal for the bandage is to incorporate therapeutic release capabilities that allow for on-demand drug administration at a desired location,” says Evans. “It allows for the visual assessment of the wound bed, so treatment-related wound parameters are readily accessible without the need for bandage removal—preventing unnecessary wound disruption and reducing the chance for bacterial infection.”

It’s also important to note that this bandage has a shelf life of over a year – so it’s quite likely that we’ll be seeing it in practice in the near future.