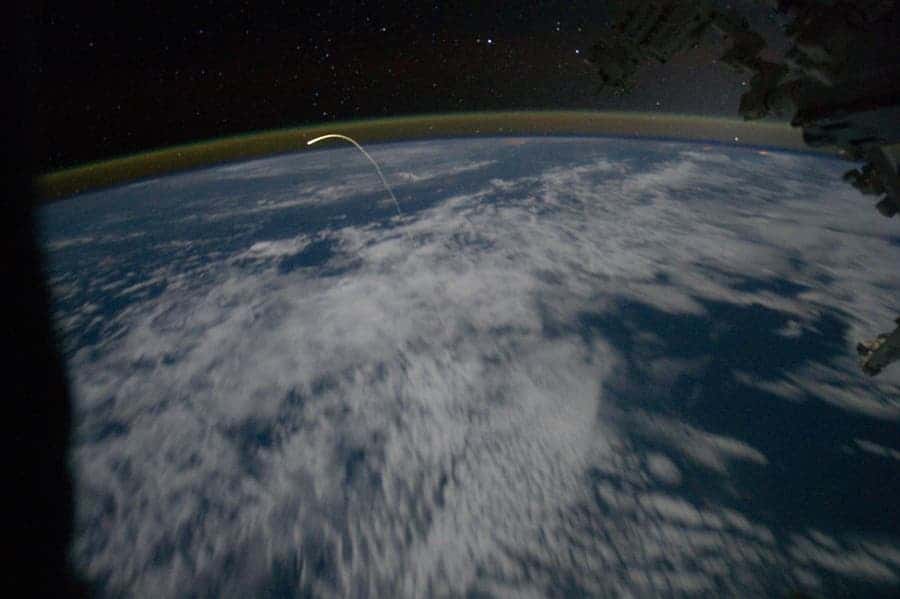 I know some of you are either nostalgic or plain tired of all the Atlantis posts we’ve been publishing lately, but this one absolutely takes the cake. The photo above, taken from aboard the International Space Station by one of the astronauts there, shows Atlantis as it enters Earth’s atmosphere, leaving a trail of golden plasma behind it. The plasma glow is actually a leftover from super-heated air around Atlantis’s heat shield, as the shuttle plunged at hypersonic speed into the atmosphere as it safely landed on the Kennedy Space Center runway yesterday.

Take a swell look at the photo, we won’t be seeing a new one for good, good while. 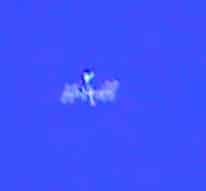 I'll admit, it doesn't look like much here, but wait till you hit play on the embedded video.

Incredibly enough, using a a simple, standard issued astrophotography set-up, amateur astronomer Scott Ferguson was able to film in incredible detail the ISS docked together with Atlantis as they both orbited above him – all in clear sky, broad daylight.

How did he do this? Well, as equipment goes Scott, like I said, used a simple 20 cm (8 inch) telescope and a video camera optimized for astrophotography, but what really helped him with his en-devour was a piece of software that predicted the position and path of the two orbiting spacecraft. Seeing how the ISS is so hard to spot during daylight, this software was critical for the catch on film.

Phil Plait, who writes at Bad Astronomy, claims that during its overhead pass, when the ISS is only 350 km above the Earth’s surface, a simple pair of binoculars is enough to see it, albeit only a distinguishable dot in the skyline. With a telescope, as you’ve probably amazed yourself already in the above video, that’s something different, and for the short time Atlantis – the last shuttle mission in fact – is still docked above, maybe you can catch the same glimpse for yourself as well. You can start from heavensabove.com so you can begin timing preparations.

Despite unfriendly whether filled with low lying clouds and a last moment countdown glitch, which gave of all the 750,000 spectators gathered at Kennedy Space Center venue to witness the launch a pretty big scare, Atlantis was catapulted into low-orbit with dazzling success yesterday, July 8th. 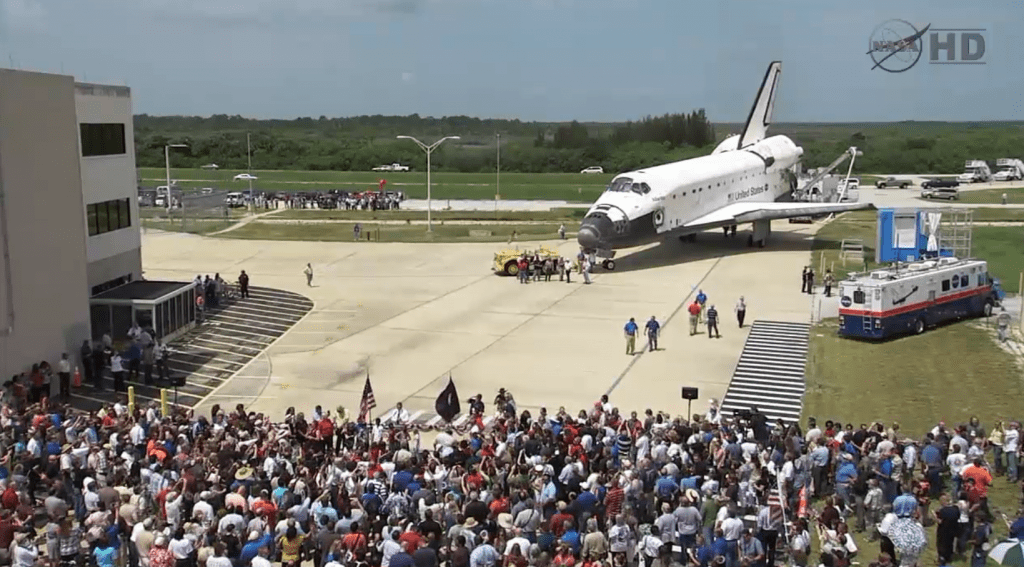 STS 135 was, as the name implies, the 135th and final shuttle mission, marking an end to more than 30 years of breath taking flights, and hopefully clearing the way for a new era of more advanced, safe and economic means of space transportation.

Take it as a weekend treat or simply as a tribute to the iconic shuttle missions, in this post I’ve taken the liberty to scour the internet for illustrated moments of the shuttle’s grand finale.

Space shuttle Atlantis will embark this Friday on its final journey, symbolizing the end of NASA’s illustrious space shuttle program. Yesterday, the last crew of the orbiter Atlantis arrived at Kennedy Space Center, Florida, where the launch will take place.

Commander Chris Ferguson said: “I think I speak for the whole crew in that we are delighted to be here after a very arduous nine-month training flow and we’re thrilled to finally be here in Florida for launch week.” 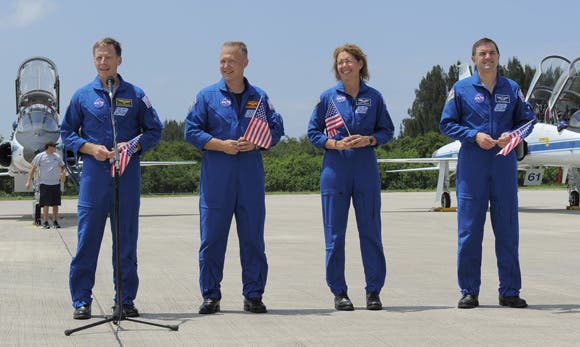 Once with the retirement of the space shuttle, NASA will be left with no kind of means of launching manned flights into orbit. Outsourcing are planned to other governments space programs, like the Russian Soyuz which costs $50 million a flight. NASA Administrator Charles Bolden, though, named private ventures such as SpaceX as the best way to get astronauts to the ISS, “rather than continuing to outsource this work to foreign governments”, while leaving NASA to focus on the bigger picture. This certainly remains to be seen.

NASA moving on to bigger goals

Bolden also insisted last week that America was set to embark on the “grand challenge” of human space exploration beyond Earth orbit and the Moon. Apparently he relates how president Obama has entrusted NASA with circling and eventually landing a man on Mars, as well as surfacing an asteroid, as primarily goals for the agency in the forthcoming half a century.

“We are not ending human space flight, we are recommitting ourselves to it and taking the necessary – and difficult – steps today to ensure America’s pre-eminence in human spaceflight for years to come,” he said.

Taking our eyes a bit off the future, and onto the present to more delicate things, if you’re a few states within the Kennedy Space Center, then I’d recommend you don’t miss the chance of witnessing first hand the last shuttle launch. You’ll be joining, though, another 750.000 people who will also be attending, says NASA, however most likely the number is somewhere over one million.

NASA sold tickets for two launch viewing sites – NASA Causeway, about 6 miles (9.6 km) from the Atlantis’ Launch Pad 39A, or from Kennedy Space Center’s Visitor’s Center. Both options have been totally sold out, however. Tickets are actually going as much as $1000 on eBay at the moment.

You don’t need to be that close to the launch anyway. Being even a dozen miles away from the launch sites will offer an once in a lifetime glimpse. Space.com recommends the city of Titusville, just 12 miles across the Indian River from Kennedy Space Center, as a premiere spot. The town of Port Canaveral, a popular harbor for cruise ships, is also a good choice, affording largely unobstructed views. Another good option for shuttle viewing is a spot along the coast in the nearby city of Cocoa Beach.

Of course, for those of us nowhere near the United States in the first place, there’s always the online alternative. NASA, as well as countless other media outlets, will broadcast the launch countdown and liftoff live on its NASA TV channel. 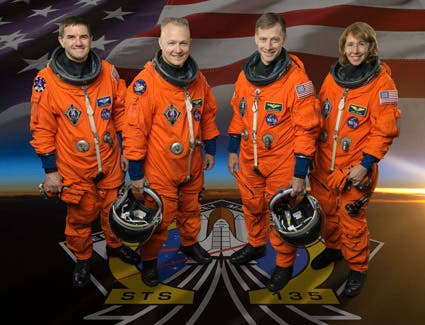 NASA just confirmed the shuttle’s last-ever mission will launch on July 8th. The space shuttle Atlantis will blast off headed for the International Space Station this Friday for a very important mission, in which it will deliver the Raffaello multipurpose logistics module to the orbiting outpost, bearing supplies, food for a whole year and spares.

The 12-day STS-135 mission will be launched from NASA’s Kennedy Space Center in Florida. This will be the 135th shuttle mission, Atlantis’ 33rd flight and the 37th shuttle mission to the station.

Bill Gerstenmaier, assistant administrator for space operations, said: “We had a very thorough review. This flight is incredibly important. The cargo that is coming up on this flight is really mandatory for space station.”

Mike Moses, Space Shuttle Program launch integration manager, chipped in with: “We’re really looking forward to achieving this mission, putting station where it needs to be and finishing strong with the shuttle program here with STS-135.”

Besides the Raffaello logistics module, Atlantis will also be responsible for delivering the Robotic Refueling Mission (RRM), which in a nut shell can be considered as a ‘robot gas station’ designed to try out the tools, technologies and techniques needed to refuel satellites in space. This also includes satellites that were never designed to be serviced. So, a pretty fitting important job for NASA’s last ever shuttle mission before permantely shelving it.

When it returns from its final 12-day trip, Atlantis will be put on permanent display at the Kennedy Space Center Visitor Complex.