A cousin of Chlamydia was discovered deep in the Arctic Ocean.

A very common sexually transmitted disease, chlamydia is caused by the bacteria Chlamydia trachomatis and it can infect men and women in different parts of the body, spread through sexual contact.

The finding is expected to help understand how the bacteria evolved to become infectious.

Chlamydia and related bacteria (collectively referred to as Chlamydiae) need to interact with other organisms to survive. It interacts specifically with organisms such as animals, plants and fungi, and even microscopic organisms such as amoebas, algae and plankton.

The bacteria spend much of their lives inside the cells of their human hosts, but can also parasitise bears and koalas. Most of the knowledge about Chlamydiae is based on studies of pathogenic lineages in the laboratory. But do the bacteria also exist in other settings? If this study is any indication, the answer is yes.

An international group of researchers reported the discovery of numerous new species of Chlamydiae that grow in deep sediments of the Arctic Ocean, in the absence of obvious host organisms.

Researchers had been exploring microbes that live more than 3 kilometers below the ocean surface and several meters in the ocean floor sediment during an expedition to Loki’s Castle, a deep-water hydrothermal ventilation field located in the Arctic Ocean between Iceland, Norway and Svaldbard. This environment lacks oxygen and macroscopic life forms.

Unexpectedly, the research team met this very abundant and diverse relative of Chlamydia.

“Finding Chlamydiae in this environment was completely unexpected and, of course, raised the question of what they were doing there,” said Jennah Dharamshi of the University of Uppsala, lead author of the study.

The team of researchers discovered that the bacteria used resources from other microbes living nearby instead of relying on host organisms to survive. The expectation now is to grow those microbes in the laboratory, as it may reveal how the bacteria ended up infecting animals, plants, fungi and microorganisms over the world.

“Even if these Chlamydiae are not associated with a host organism, we expect that they require compounds from other microbes living in the marine sediments,” senior author Thijs Ettema, a professor of microbiology at Wageningen University in the Netherlands, said in the statement.

Only in the US, there are an estimated 2.86 million infections of chlamydia happening every year, making it the most commonly reported sexually transmitted disease, according to the Centers for Disease Control and Prevention.

The study was published in the journal Current Biology.

The Arctic Ocean was once a huge freshwater lake, but it’s since become a salty ocean — we now know how. 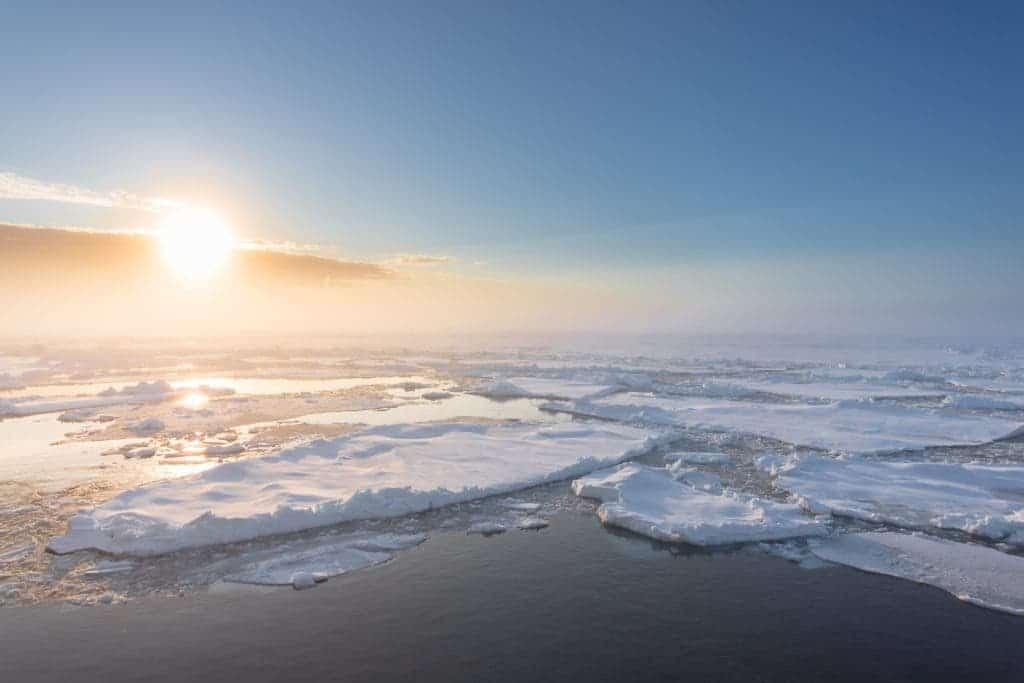 Drift ice and pack ice seen from aboard the German research vessel Polarstern, on the way to the North Pole. Image credits: Stefan Hendricks.

The Arctic Ocean is the smallest and shallowest of the world’s five oceans. The International Hydrographic Organization (which is responsible for the classification) recognizes it as an ocean, though some scientists consider it a sea or simply an estuary of the Atlantic Ocean. Still, regardless of classification, it’s a large mass of water which is now salty. The Arctic Ocean has the lowest average salinity, especially due to low evaporation (caused by reduced temperature), but also by heavy freshwater inflow from rivers and streams. Its limited connection to the other, saltier oceans also contributed to this.

We know the ocean started to become salty after global water levels rose enough to submerge the landbridge between Greenland and Scotland, establishing a communication channel. With the help of a climate model, researchers from the Alfred Wegener, Helmholtz Centre for Polar and Marine Research (AWI) have shown how this process happened and when things started to change.

According to the climate model they built, 3,300 cubic kilometers of freshwater flow into the Arctic Ocean every year, which means you need a lot of salt water influx to outbalance that. In the hot and humid climate of the Eocene, 56 to 34 million years ago, it was likely even higher. It was only when the above-mentioned land bridge was covered by water that the salinity started to increase.

“In reality, this tectonic submersion process lasted several million years,” says Climate Scientist Michael Stärz, first author of the study. “Interestingly, the greatest changes in the circulation patterns and characteristics of the of the Arctic Ocean only occurred when the land bridge had reached a depth of over 50 metres below the surface.”

“Interestingly, the greatest changes in the circulation patterns and characteristics of the of the Arctic Ocean only occurred when the land bridge had reached a depth of over 50 metres below the surface.” 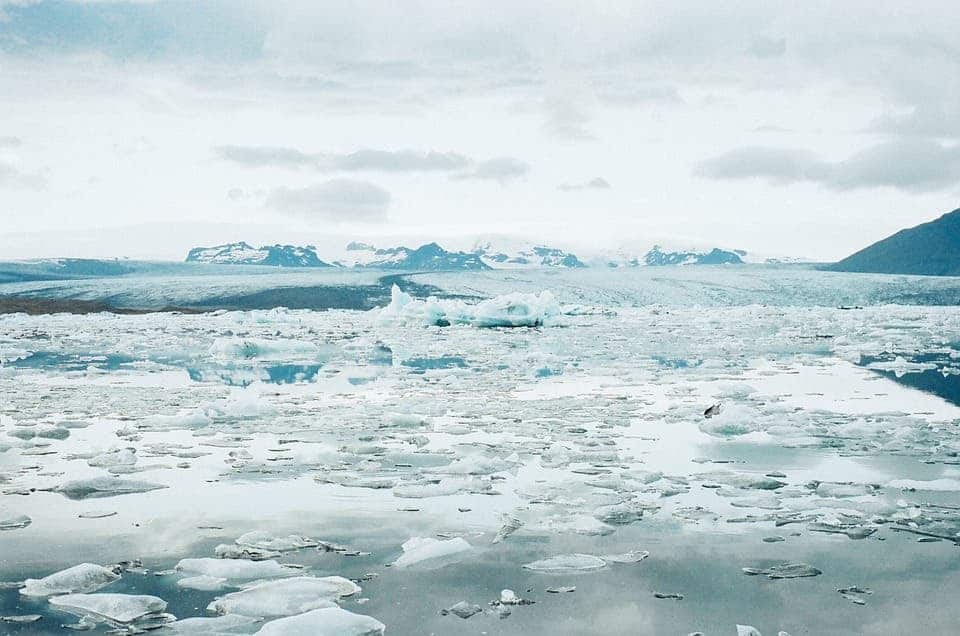 The land bridge is now submerged some 500 meters beneath sea level. Iceland is the only portion of it still visible. Image via Pixabay.

As waters continued to rise, another tipping point was reached. After the land bridge was submerged by 200 meters, the modern version of the Arctic Ocean started to take shape.

“Only when the oceanic ridge lies below the surface mixed layer can the heavier saline water of the North Atlantic flow into the Arctic with relatively little hindrance,” explains Stärz. “Once the ocean passage between Greenland and Scotland had reached this critical depth, the saline Arctic Ocean as we know it today was created.”

Nowadays, what used to be this enormous, basaltic land bridge is submerged at 500 meters below sea level, with Iceland being the only region remaining above water level.

Arctic ice, a key indicator for global climate status, has reached another record low, lower than in computer estimates, hinting at a major disaster.

Researchers from the U.S. National Snow and Ice Data Center announced reached its lowest point on September 16, when it will cover approximately 1.32 million square miles (3.42 million square km) of the Arctic Ocean – the least since satellite records began 33 years ago. However, it might go even lower in days to come, depending on changing weather conditions. A final analysis is expected next month.

“We are now in uncharted territory,” Mark Serreze, the center’s director, said in a statement. “While we’ve long known that as the planet warms up, changes would be seen first and be most pronounced in the Arctic, few of us were prepared for how rapidly the changes would actually occur.”

“What happens in the Arctic doesn’t stay in the Arctic,” said Dan Lashof, a climate scientist at the nonprofit Natural Resources Defense Council. “This has a real impact on Americans where they live and work.”

Global warming – beyond our control?

The situation truly seems dire; one of the leading authorities in the world, Prof Peter Wadhams of Cambridge University calls for urgent measures, predicting the collapse of the Arctic sea ice in summer months within four years. The amplitude of this disaster would bring consequences more dire than even the pessimists would have expected.

“At first this didn’t [get] noticed; the summer ice limits slowly shrank back, at a rate which suggested that the ice would last another 50 years or so. But in the end the summer melt overtook the winter growth such that the entire ice sheet melts or breaks up during the summer months. This collapse, I predicted would occur in 2015-16 at which time the summer Arctic (August to September) would become ice-free. The final collapse towards that state is now happening and will probably be complete by those dates”, he details.

“That is a truly staggering rate of melting, far beyond what scientists thought would happen a few years ago,” Bob Ward of the London School of Economics and Political Science said in a statement. “Policy-makers need to wake up to the scale and pace of the impacts from climate change.”

Recent climate models suggest the Arctic could be ice-free by 2050, but usually, these climate models tend to be optimistic, often unable to comprise the full extent of the damage. Wadhams says the implications are “terrible”.

“The positives are increased possibility of Arctic transport, increased access to Arctic offshore oil and gas resources. The main negative is an acceleration of global warming. As the sea ice retreats in summer the ocean warms up (to 7C in 2011) and this warms the seabed too. The continental shelves of the Arctic are composed of offshore permafrost, frozen sediment left over from the last ice age. As the water warms the permafrost melts and releases huge quantities of trapped methane, a very powerful greenhouse gas so this will give a big boost to global warming.”