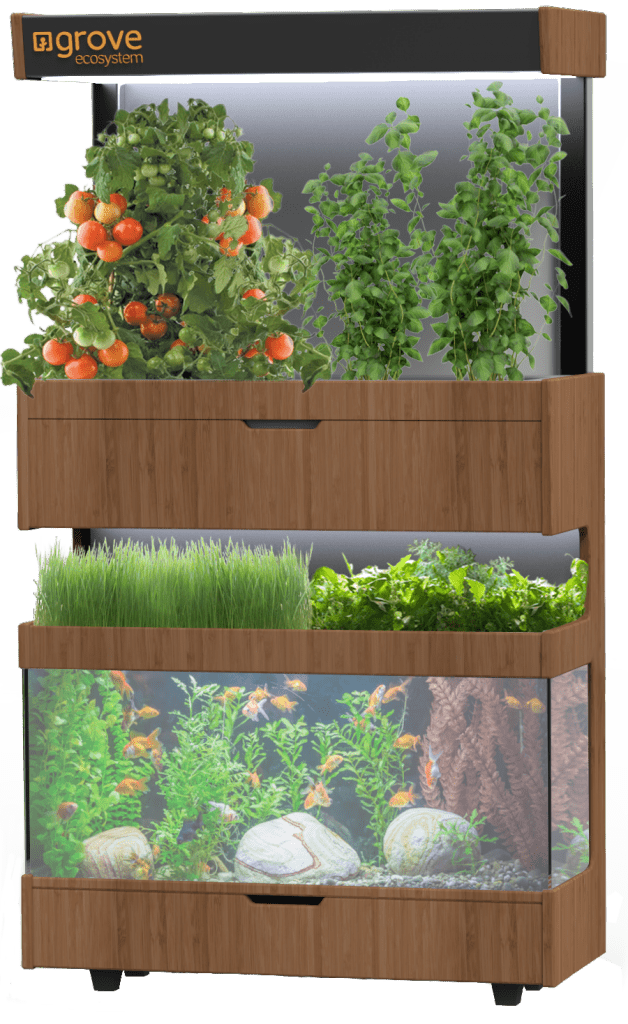 Grove Labs, a startup based in Sommerville, Massachusetts, was founded by two MIT students who wanted to give people the opportunity to grow veggies all year round, regardless of their location and the local temperature, with minimum effort. The startup raised $4 million in seed funding, according to the Boston Globe, but it also went big on Kickstarter, raising more than $230,000 in additional funding. At $2,700, their product isn’t exactly cheap, so is it really worth it? Let’s see how it works.

The key component is an aquarium, where fish eat fish food and turn it into waste. The incorporated bacteria then take the waste and turns it into nitrates, which are an excellent fertilizer for plants; this fertilizer is pumped through a pumping system to the plant beds, thus encapsulating a functional ecosystem. You don’t need to water it, you don’t need to weed it, and there’s no waste.

This induced symbiosis between fish, bacteria and plants is called aquaponics. Here’s how Grove describe it:

“The Ecosystem harnesses beneficial bacteria, fish, and plants in a natural cycle to reliably grow delicious produce in a space the size of a bookshelf. This cycle is called aquaponics, and it’s used in the most sustainable, resilient, and productive commercial greenhouses around the world. Now this beautiful cycle can fit in your home.”

That sounds quite creative and seems like a big innovation… except it’s not. Aquaponics has been used, in one form or another, for years – a simple search revealing several examples (1, 2, 3). There’s an entire sub-reddit dedicated to aquaponics, where people describe how they built similar systems for 10 times less money. Sure the MIT version has more advanced sensors and you can control it through wi-fi, but let’s be honest here – $2,700 is a lot of money, especially considering the amount of vegetables you can actually grow with it. It’s pretty obvious that this will not be a cost-effective way of growing veggies. So is it actually worth it, all things considered?

I’m not convinced. I’m definitely a fan of growing food or herbs inside your own apartment or office, and aquaponics is an extremely interesting concept, but I haven’t seen anything here to justify the price. As it stands, for the money, it’s just not efficient enough – you can build your own for way less, or, depending on where you live, purchase similar systems much cheaper.