Tails are almost a standard accessory in the animal kingdom, and for good reason too. Fish rely on their tails for propulsion, cows use them as fly swatters, crocodiles store fat in them, and monkeys rely on tails for balance and even to grip things with them. Humans actually have a tail too as embryos, however, it regresses into fused vertebrae becoming the coccyx, also known as the “tailbone”.

This tailbone is actually proper evidence that somewhere in our evolutionary journey something happened that made us lose our tails. We’re not alone either. Humans belong to a group called great apes, and along with gorillas, orangutans, chimps, and bonobos, none of us have tails. The lesser apes like gibbons don’t have tails either. What gives?

If you’re sorely missing your tail, you may have a pesky mutation to blame, according to a new study that appeared this week in the preprint server bioRxiv.

The oldest known primate fossils are around 66 million years old, around the same time the dinosaurs went extinct. These ancestors had full-fledged tails that were likely handy when living in canopies. The utility of this flexible body part can be attested to by the fact that even after all these years, most living primates and the vast majority of monkeys still sport a tail.

On the other hand, by the time Proconsul, the most primitive ape that is well-known from a fossil skeleton, appeared some 20 million years ago, it had no tail at all.

Why exactly humans and their closest relatives lost their tails has been a matter of debate for some time. What biologists have noticed is that apes can walk with upright stances thanks to a shorter lumbar region enabled by the absence of the tail. Meanwhile, new world monkeys use all fours.

As such, the loss of the tail can be seen as an adaptation to a particular environment, which allowed our ape ancestors to leave trees and walk on the ground. With some adjustments, early humans could not only walk but jog over the grassland.

Bo Xia, a graduate student in stem cell biology at N.Y.U. Grossman School of Medicine, has always been curious why humans lack tails. Being a scientist, he decided to answer this question himself, or at least attempt to, by zooming in at the molecular level.

Xia and colleagues started his journey by studying how tails form in animals that sport them. He found that early in the embryo’s development, some genes switch on that instruct stem cells to develop into vital skeletal structures, such as the neck, lumbar region, and eventually a chain of vertebrae and muscles that form the tail.

According to the researchers, we know of about 30 genes that are fundamental to tail development in various species. When they compared the DNA of six species of tailless apes to nine species of tailed monkeys, the scientists found a mutation shared by apes and humans but missing in monkeys.

The mutation affects a gene called TBXT, which is interestingly enough one of the first genes ever discovered more than a century ago. The mutation found by Xia is found in the middle of the TBXT gene and is virtually identical in humans and other apes.

Back in the lab, the researchers genetically engineered mice that had the TBXT mutation. Lo and behold, many embryos lacked a tail while others grew a very short, stumpy one.

“We propose that selection for the loss of the tail along the hominoid lineage was associated with an adaptive cost of potential neural tube defects and that this ancient evolutionary trade-off may thus continue to affect human health today,” the researchers wrote.

About 20 million years ago, an ancient ape was born with this mutation and reproduced significantly more thanks to it — rather than in spite of it — passing it on to offspring. Eventually, the TBXT mutation became a defining feature of the ape genome — and it’s likely not alone.

The genetically engineered mouse embryos developed a range of altered short tails. The human tailbone, however, basically looks identical across individuals, suggesting other mutations may be involved in its development.

So if you ever wondered “Dude, where’s my tail?” you can now point your finger at TBXT. 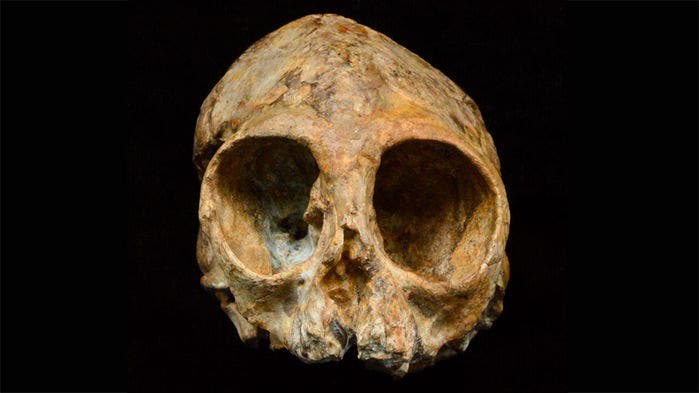 Anthropologists have been dying to get their hands on fossil evidence of the human-ape evolutionary split ever since we figured out that it must’ve happened. Three years ago, on a dusty trail in Kenya, Providence might have delivered them just one such prize. The catch, however, is that the fossilized skull is about the size of a baseball and comes from an infant individual. So it’s a bit of a mixed blessing, as it can help us piece together a rough idea of what the common ancestor of humans and apes looked like — but does little to settle other debates.

The skull is surprisingly well preserved for its age and was found in the Turkana Basin, northern Kenya, some 3 years ago. The team, led by primate paleontologist Isaiah Nengo of De Anza College in Cupertino, California, were working with Kenyan fossil hunter John Ekusi on excavations close to Lake Turkana. It hadn’t been a decidedly average day until Ekusi walked back to the jeep to light a cigarette — and found himself in surprising company.

“There was this skull just sticking out of the ground,” Nengo recalls. “It was incredible because we had been going up and down that path for weeks and never noticed it.”

It obviously once belonged to a primate, and the researchers sent it to the Noble Gas Laboratory at Rutgers University in New Brunswick, New Jersey, for argon isotope dating, revealing that it was about 13 million years old. Turkana Basin was a lush rainforest during that time, an ideal habitat for apes and other primates.

The skull resembled that of a modern gibbon, Nengo says, but teeth shape and dental patterns tie it closer to one other genus of Miocene primates found in Kenya, Nyanzapithecus. The skull’s molars, however, are much larger than those of known nyanzapithecines, which suggested a new species altogether. The researchers named it N. alesi after the Turkana word for “ancestor.” 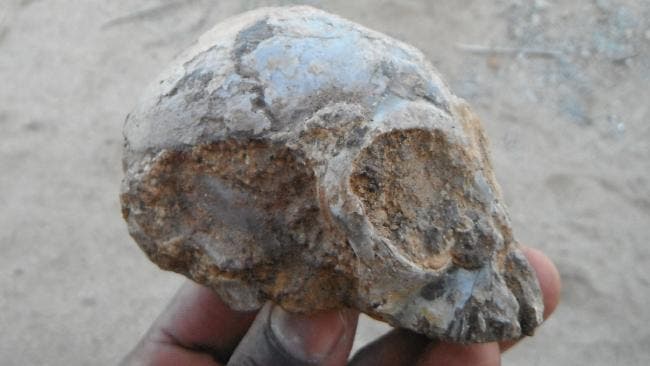 It was then sent to the European Synchrotron Radiation Facility in Grenoble, France, for extremely high-detail X-ray imaging study. This allowed the team to count growth lines in the skull’s (still unerupted) adult teeth. These indicated that the animal was about 485 days (or 1 year and 4 months) old when it died. The imaging also showed bony ear tubes embedded in the skull, which likely acted as a balance organ.

And those tiny little tubes have a big implication. Whether Nyanzapithecus was an ape or monkey line has been a hotly topic, but these tubes, along with the shape and size of the teeth, solidly mark N. alesi — and by extension all nyanzapithecines — as apes, the team reports. Even more, these tubes signal a direct link to the ape line from which humans and modern apes originate.

That’s a finding that could put a long-lasting debate of humanity’s birthplace to bed. Finding a common man-ape ancestor in Africa tips the scales heavily in favor of this continent. But the debate is far from settled, because what the tiny skull giveth it also taketh away.

The problem is that most headway in anthropology research is based on comparative analysis. That’s a fancy way of saying that anthropologists spend a lot of time comparing similar fossils to create an evolutionary roadmap. It works really well if you have fossils to compare — but that’s not the case here. We didn’t find any other infant Miocene-ape skull apart from this one. So although it could offer a link between modern human and ape ancestry, it leaves too much wiggle room. For example, we can’t meaningfully compare it to recently-found Graecopithecus, a similar early hominid/human-like ape which seems to hail from Europe. So while supporters of the out of Africa theory can point to N. alesi, their counterparts can rally around Graecopithecus — and it’s a stalemate again.

We simply need more fossil evidence to pinpoint humanity’s place of birth beyond a doubt. We may never be able to do it, considering how unlikely it is for bones to successfully fossilize. But considering the team found their skull literally sticking half-out from the ground, I’d say we have a fair bit of luck on our side.

The paper “New infant cranium from the African Miocene sheds light on ape evolution” has been published in the journal Nature.