Scientists may have finally cracked the mystery behind the Antikythera Mechanism, a 2.000-year-old device used by the ancient Greeks to calculate astronomical positions. The “world’s oldest computer” has puzzled scientists for over a century, but a digital replica with a working gear system may shed new light on it.

The Antikythera Mechanism was found in a shipwreck off the coast of Crete in 1901 — one of the very first wrecks to be archaeologically investigated. Way ahead of its time, this complex mechanism of revolving bronze gears and a display is simply mind-boggling: it’s an analog computer dating from Ancient Greece.

The mechanism was used to predict astronomical positions and eclipses for the astrological calendar as well as the ancient Olympic Games but many questions still loom about it. Though obscured by corrosion after it was lost for thousands of years at the bottom of the sea, the Antikythera Mechanism still has visible gears with triangular teeth and a ring divided into degrees. It featured a handle on the side for winding the mechanism forward and backward – very similar to how a clock works but showing the position of planets instead of hours, minutes and seconds. Only a third of the device survived the shipwreck, leaving many open questions on how it worked and what it looked like.

Researchers believe they’ve solved the back of the mechanism in earlier studies, but the complex gearing system at the front remained a mystery. Now, scientists at University College London (UCL) believe they have finally cracked the puzzle.

“The Sun, Moon, and planets are displayed in an impressive tour de force of ancient Greek brilliance,” the paper’s lead author, Professor Tony Freeth, told the BBC. “Ours is the first model that conforms to all the physical evidence and matches the descriptions in the scientific inscriptions engraved on the mechanism itself.”

Freeth and his team from UCL used 3D computer modeling to recreate the entire front panel, hoping to build a full-scale replica of the Antikythera using modern materials in the future. The digital result shows a center dome representing Earth – surrounded by the moon, the sun, Zodiac constellations, and rings for Mercury, Venus, Mars, Jupiter, and Saturn.

To create the model, the researchers relied on previous studies on the device, including that of Michael Wright, the former curator of the Science Museum of London who had constructed a working replica. They used inscriptions found on the mechanism and a mathematical model on how the planets moved that was first created by the philosopher Parmenides.

The model recreated by the researchers includes the gears and rotating dials, so to show how the planets, the sun, and the moon move across the Zodiac — the ancient map of the stars — on the front face and the phases of the moon and eclipses on the back. It replicates the ancient Greek assumption that all heaves revolved around the Earth.

Now that it has been made, the team at UCL wants to make physical versions of the front panel, starting by using modern techniques to check that the device works and then using the same techniques that would have been used by the ancient Greeks. This would help to get a better understanding of how the Greeks were able to build such a device, something that can’t be answered yet.

“If they had the tech to make the Antikythera mechanism, why did they not extend this tech to devising other machines, such as clocks?,” Adam Wojcik, a co-author of the paper, told The Guardian. “There’s also a lot of debate about who it was for and who built it. A lot of people say it was Archimedes. He lived around the same time it was constructed.”

The study was published in the journal Scientific Reports.

The ancient bones could offer valuable DNA information from an ancient shipwreck victim.

The Antikythera site is one of the most intriguing ones in history, particularly because of what you see above. That’s the Antikythera mechanism, a 2000-year-old analogue computer used to predict astronomical positions and eclipses for the astrological calendar as well as the ancient Olympic Games. Composed of over 30 meshing bronze gears, the mechanism shows an unprecedented level of sophistication, and one that wasn’t re-encountered in history until the fourteenth century. But that’s not all of it.

The Antikythera Shipwreck is the largest ancient shipwreck ever discovered, probably representing a large grain carrier. Discovered by Greek sponge divers in 1900, it was also the first wreck ever to be investigated by archaeologists. After recovering dozens of valuable antiques, marble statues, gold jewellery, glassware, and an unique weapon the research team might have discovered something even more valuable: a skeleton.

“Against all odds, the bones survived over 2,000 years at the bottom of the sea, and they appear to be in fairly good condition,” Dr. Hannes Schroeder of the Natural History Museum in Copenhagen, Denmark, and an expert on DNA, said in a news release.

The find consists of a partial skull with three teeth, arm and leg bones, and several pieces of rib, the study writes. The skeleton, discovered in August, is the first to be recovered from an ancient shipwreck since DNA studies became a thing – and this could be very important. If the samples are well-preserved, then we could learn much about the person’s ethnicity and geographic origin, as well as some hints about his lifestyle. This would open an unprecedented window into the past. Who were those people? Where were they coming from, and where were they going? Schroeder guesses from the skeleton’s fairly robust femur and unworn teeth that the individual was a young man, but without the DNA tests, it’s hard to say more.

So far, they’ve named the bones’ owner Pamphilos, after a name found neatly scratched on a wine cup from the wreck. But we have no idea who he – or the original Pamphilos – was.

“Your mind starts spinning,” says Schroeder. “Who were those people who crossed the Mediterranean 2,000 years ago? Maybe one of them was the astronomer who owned the mechanism.”

Researchers are understandably excited. Dr. Brendan Foley of the Woods Hole Oceanographic Institution and a member of the research team said:

“This is the most exciting scientific discovery we’ve made here,” Foley told the Guardian, adding that he believed the passenger or crew member “was trapped in the ship when it went down and he must have been buried very rapidly or the bones would have gone by now.”

He and the rest of the team hope to reconstruct a map of past population movements, and they want to see how ancient individuals can fit on that map.

Since it was found in a shipwreck off the coast of Crete in 1901, the intricate Antikythera Mechanism has puzzled scientists. Way ahead of its time, this complex mechanism of revolving bronze gears and display was used by the ancient Greeks more than 2,000 years ago to calculate the positions of the stars and planets. Now, a decade-long investigation suggests the Greeks used the world’s oldest computer for astrological purposes, as well. 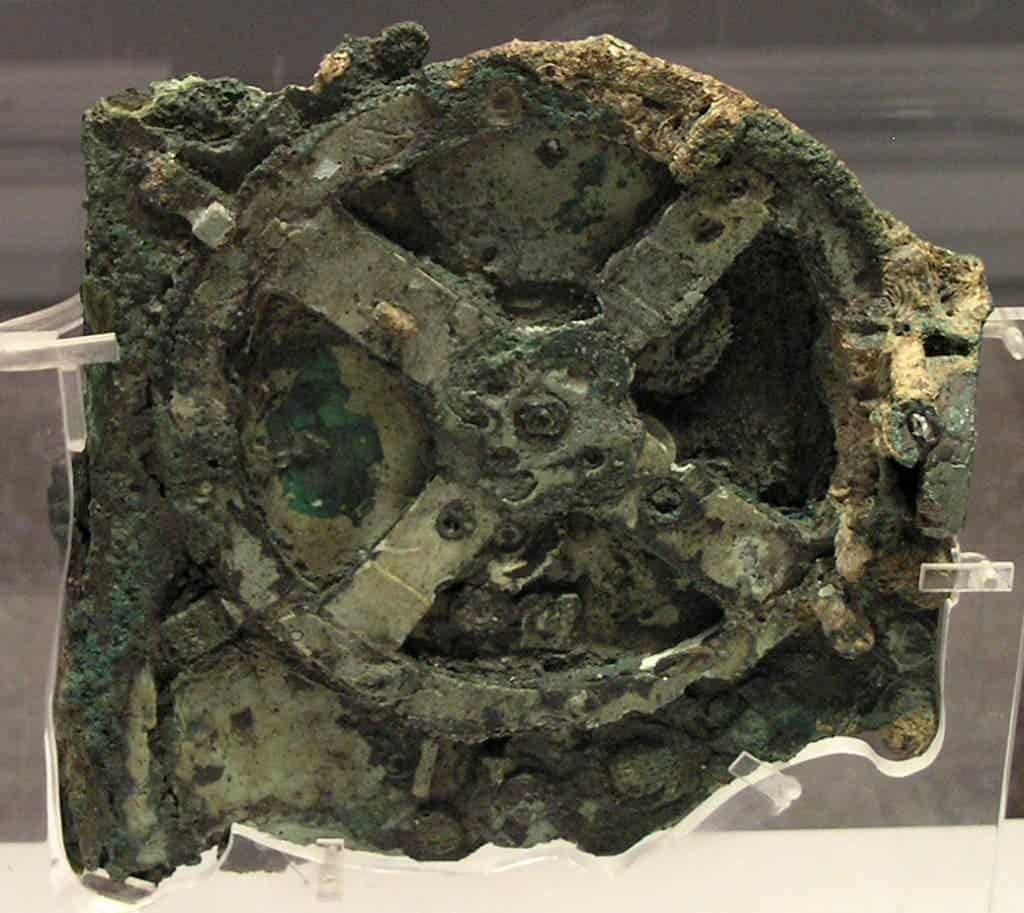 The level of craftsmanship of the ancient computer, now housed at the National Archaeological Museum in Athens, is simply mind boggling when you factor its age. Though obscured by corrosion after it was lost for thousands of years at the bottom of the sea, the Antikythera Mechanism still has visible gears with neat triangular teeth not all that different from those in modern clocks, and a ring divided into degrees.

The mechanism featured a handle on the side for winding the mechanism forward or backward. As an ancient Greek navigator turned the handle, trains of interlocking gear wheels drove at least seven hands at various speeds. Again, that’s very similar to how a clock works, only instead of hours, minutes, and seconds, the Antikythera Mechanism would show the position of the Sun, the moon, and each of the five planets visible to the naked eye (Mercury, Venus, Mars, Jupiter and Saturn). A rotating ball showed the current phase of the Moon and inscriptions explained which star rose and set on a particular given date. On the back of the case, two dials showed the calendar and the timing of lunar and solar eclipses.

Nothing as close to this level of sophistication would appear in over a thousand years. 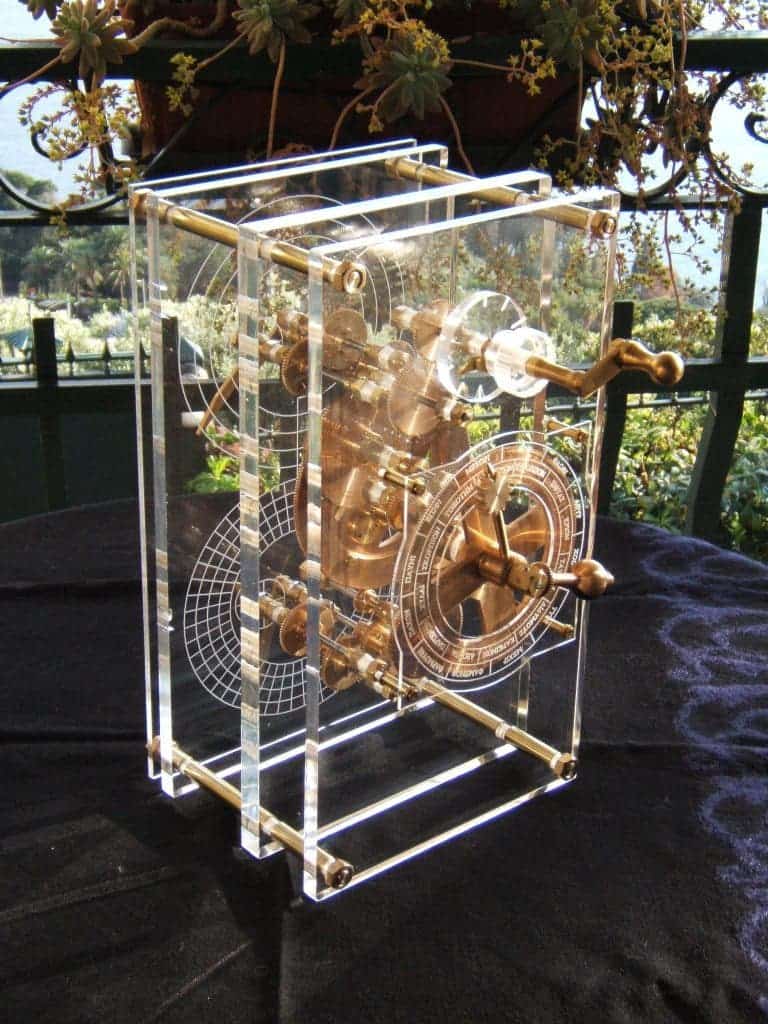 Besides navigation, the Antikythera Mechanism was also likely used for more esoteric purposes, an international team of researchers reported at the Katerina Laskaridis Historical Foundation Library in Greece the other day.

For more than ten years, researchers have been trying to decipher the tiny engravings on the mechanism. The years of water and wildlife exposure have taken their toll and corrosion obscured most of the researchers’ efforts. Thanks to cutting-edge imaging techniques like X-ray scanning, the team was able to see past the many layers of accumulated sediments and paint a picture of what the fragments belonging to the ancient computer must have looked like before they were spoiled by the hand of time. 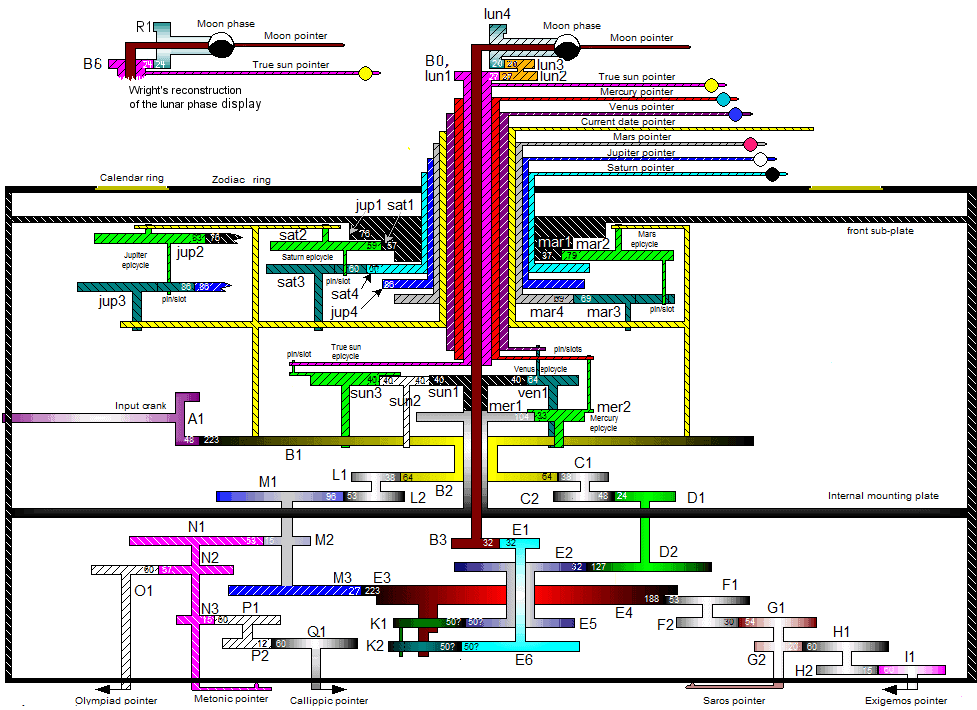 Schematic showing the level of intricacy involved in turning the more than two dozen gears of the device. Credit: Wikimedia Commons

In total, 3,500 characters of finely inscribed text were surfaced. These were engraved on the inside covers and visible front and back sections of the mechanism.

“Now we have texts that you can actually read as ancient Greek, what we had before was like something on the radio with a lot of static,” said team member Alexander Jones, a professor of the history of ancient science at New York University.

“It’s a lot of detail for us because it comes from a period from which we know very little about Greek astronomy and essentially nothing about the technology, except what we gather from here,” he said. “So these very small texts are a very big thing for us.” 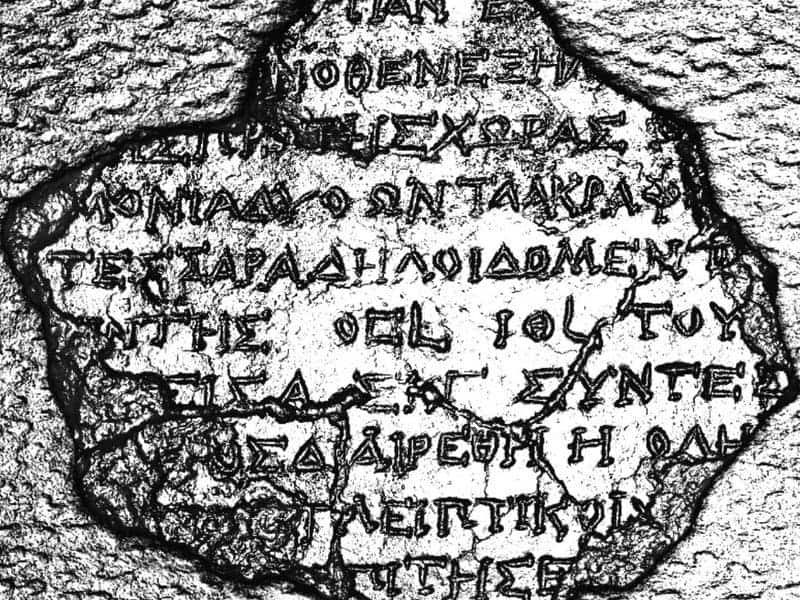 Inscriptions on the back cover of Fragment 19. These were previously obscured by sediments. Credit: Antikythera Mechanism Research Project

The text was not like a manual, but rather like a label that described what the whole mechanism does. “It’s not telling you how to use it, it says ‘what you see is such and such,’ rather than ‘turn this knob and it shows you something,'” Jones said. The user of the device was likely very educated.

Jones and colleagues confirmed some of the mechanisms had the function of predicting solar and lunar eclipses, events which the Ancient Greeks thought could impact human affairs. As such, besides its primarily astronomical purpose, the Antikythera Mechanism was also trusted as a tool for reading the future.

Other important findings researchers could infer from the newly uncovered text is that the Antikythera Mechanism was made on the island of Rhodes by at least two peoples, judging from how the engravings were etched. Archeologists are still searching for the other missing fragments at the site of the ancient shipwreck. If these are found, maybe the Antikythera Mechanism could turn out to be even more complex than we think it is.

The results were published in a special issue of the journal Almagest.