I realize we’re maybe bugging some of you with these constant asteroid/meteor pieces here on ZME Science, but for what’s it worth we found this recently released NASA video comprised of radar images during 2012 DA14’s recent flyby very interesting. 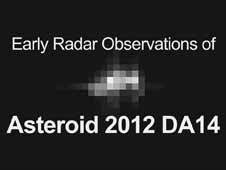 The movie, which combines 73 radar-images  captured over the course of eight hours on the night of Feb. 15-16, was compiled by NASA’s Jet Propulsion Laboratory. Now, if you’ve already pressed play and seen the movie, you might have felt a bit disappointed. But even though the asteroid might look like something off of Space Invaders, the image resolution is still a whooping 13 feet (4 meters) per pixel.

That goes a bit to show how massive DA14 really is and how devastating an eventual collision of the asteroid with our planet might have caused. These radar observations provide the most accurate measurement of DA14,  40 meters along its long axis. Also, the radar imaging also help better fine-tune calculations of 2012 DA14’s future orbit by getting a better fix on its size, shape, rotation, surface features and surface roughness. Next time it comes by Earth again, we’ll be ready.