NASA released the breathtaking image you see below, announcing that it is basically X-ray light echoes reflecting off clouds of dust. But this image does more than thrill us amateur stargazers – it helps astronomers figure out how far away the double star system Circinus X-1 is from Earth. 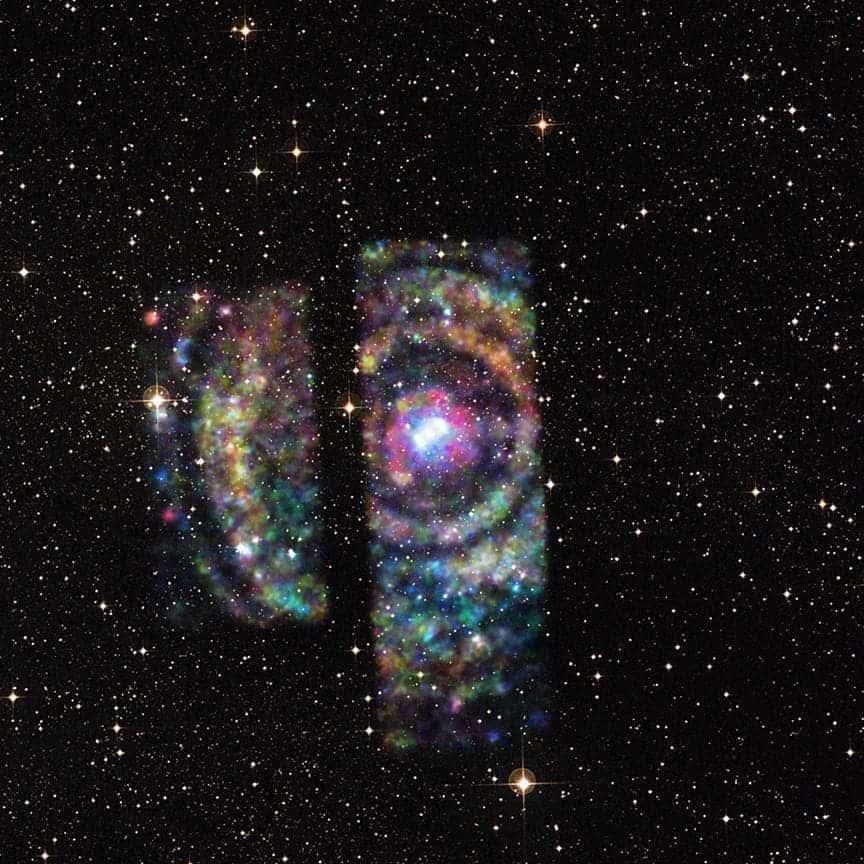 A light echo in X-rays detected by NASA’s Chandra X-ray Observatory has provided a rare opportunity to precisely measure the distance to an object on the other side of the Milky Way galaxy. The rings exceed the field-of-view of Chandra’s detectors, resulting in a partial image of X-ray data.
Credits: NASA/CXC/U. Wisconsin/S. Heinz

“It’s really hard to get accurate distance measurements in astronomy and we only have a handful of methods,” said Sebastian Heinz of the University of Wisconsin in Madison, who led the study. “But just as bats use sonar to triangulate their location, we can use the X-rays from Circinus X-1 to figure out exactly where it is.”

Circinus X-1 is an X-ray binary star system that includes a neutron star, a type of stellar remnant that can result from the gravitational collapse of a massive star after a supernova. Neutron stars are the densest and smallest stars known to exist in the universe; with a radius of only about 12–13 km (7 mi), they can have a mass of about two times that of the Sun. Observation of Circinus X-1 in July 2007 revealed the presence of X-ray jets normally found in black hole systems, the first neutron star ever observed  that displays this similarity to black holes.

“Circinus X-1 acts in some ways like a neutron star and in some like a black hole,” said co-author Catherine Braiding, also of the University of New South Wales. “It’s extremely unusual to find an object that has such a blend of these properties.”

In 2013, the Circinus system created a burst of X-rays; the X-rays bounced off clouds of interstellar dust, resulting in rings of X-ray light which were ultimately picked up by the Chandra X-Ray observatory. The results are as beautiful as they are useful for astronomers.

“We like to call this system the “Lord of the Rings,” but this one has nothing to do with Sauron,” says study co-author Michael Burton of the University of New South Wales in Australia. “The beautiful match between the Chandra X-ray rings and the Mopra radio images of the different clouds is really a first in astronomy.”

By comparing the Chandra data to prior images of dust clouds detected by the Mopra radio telescope in Australia, astronomers learned that each ring was actually the result of X-Ray reflections of a different dust cloud. Knowing that X-rays travel at the speed of light, this lets them know what the distance to different clouds is, and the X-ray echo then lets them determine the relative position of Circinus X-1 to the clouds. By analyzing the rings and the combined radio data and using simple geometry, researchers managed to accurately determine the distance of Circinus X-1 from Earth. These results have been published in The Astrophysical Journal and are available online.

The system is also interesting from another point of view: astronomers believe it is the youngest X-ray binary yet discovered, starting emitting X-rays only 2,500 years ago.