A low-cost upgrade allows ground-based telescopes to achieve unprecedented precision in light intensity measurement. The telescope attachment comprises state-of-the-art micro-optic devices that spread light across an image and minimizes distortions from Earth’s atmosphere. The quality reportedly rivals that of photometric observations from space.

Left: Light from a laser pointer is shaped into a wide and stable output using a beam-shaping diffuser. Right: The diffuser installed at the 3.5m telescope at Apache Point Observatory. Credit: Penn State University. 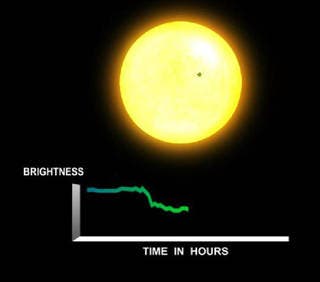 When a planet crosses in front of its star as viewed by an observer, the event is called a transit. Transits by terrestrial planets produce a small change in a star’s brightness of about 1/10,000 (100 parts per million, ppm), lasting for 2 to 16 hours. Credits: NASA Ames

The over 2,300 exoplanets confirmed by NASA so far have mostly been identified by the new defunct Kepler space telescope. Kepler was designed to look for planets in one small patch of sky, that contains about 4.5 million stars, by measuring the dimness produced by an alien planet transit in front of a star. Doing the same from Earth has proven challenging, which is why scientists had to deploy the telescope in outer space, where the planet’s atmosphere doesn’t interfere with the light beamed by alien stars. But this also makes it extremely expensive for alien hunters to do their job properly.

Beam-shaping diffusers could thus be a lifesaver since they enable existing ground-based telescopes to radically improve their light sensing precision. These devices are essentially small pieces of glass which cost very little and are easily adaptable to existing hardware. The innovation lies in the complex engineering that went into designing the diffusers.

“This inexpensive technology delivers high photometric precision in observations of exoplanets as they transit — cross in front of — the bright stars that they orbit,” said Gudmundur Stefansson, graduate student at Penn State, NASA Earth and Space Science Fellow, and lead author of the paper. “This technology is especially relevant considering the impending launch of NASA’s Transiting Exoplanet Survey Satellite (TESS) early in 2018. It is up to ground-based facilities to rapidly and reliably follow-up on candidate planets that are identified by TESS.”

The diffusers are manufactured in a nanofabrication process, through which a specifically designed surface geometry is etched on the glass. This pattern consists of “precise micro-scale structures, engineered to mold the varying light input from stars into a predefined broad and stable output shape spread over many pixels on the telescope camera,” according to Suvrath Mahadevan, associate professor of astronomy and astrophysics at Penn State.

The diffuser tech was put to the test in three American telescopes: the Hale telescope at Palomar Observatory in California, the 0.6m telescope at Davey Lab Observatory at Penn State, and the ARC 3.5m Telescope at Apache Point Observatory in New Mexico. The upgrade was obvious as in all cases the images produced with the new attachment were significantly more stable than before. What astronomers refer to when they say stability is that images should maintain a constant size, shape, and intensity. So, by shaping the output of light, the diffuser negates the noise created by the atmosphere.

“This technology works over a wide range of wavelengths, from the optical — visible by humans — to the near infrared,” said Jason Wright, associate professor of astronomy and astrophysics at Penn State and an author of the paper. “As such, diffusers can be used for a wide range of exoplanet science. We can use them to precisely measure the times exoplanetary worlds transit their stars, which will help us measure their masses and compositions, and even find new planets in their systems; and we can use them to study the temperature structures of giant planets’ atmospheres.”

Next, the goal is to establish collaborations around the world to bring this technology to all telescopes that would need it.