The solar system with seven potentially habitable planets is much older than our own. 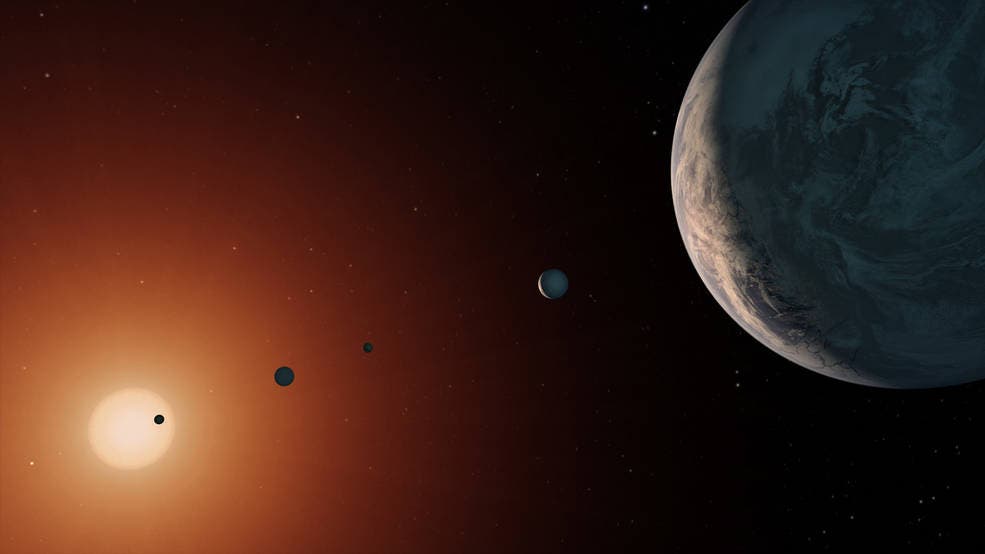 This illustration shows what the TRAPPIST-1 system might look like from a vantage point near planet TRAPPIST-1f (at right).
Credits: NASA/JPL-Caltech

TRAPPIST-1, with the much less attractive technical name 2MASS J23062928-0502285, is an ultra-cool brown dwarf just slightly larger than Jupiter. Despite its small size and low temperature, it’s one of the most interesting stars we’ve discovered out there. In February this year, NASA announced the discovery of seven Earth-sized planets around the star, all in the habitable zone — the so-called Goldilocks area where it’s just the right temperature for liquid water to exist. To make things even more exciting, this solar system is a ‘mere’ 40 light years away. It’s far enough to be inaccessible for the foreseeable future, but given the sheer immensity of our galaxy, 40 light years is just peanuts.

But having an Earth-like figure and being located in the habitable zone isn’t nearly enough to support life. That’s why astronomers at NASA have been studying the system assiduously, trying to learn more about it and establish its conditions. Now, for the first time, they’ve put an age on it — or rather, an age range. TRAPPIST-1 is between 5.4 and 9.8 billion years old. This makes it a very old system compared to our own, which is ‘just’ 4.5 billion years old.

It’s indeed a very broad range, but at least it enables us to say that the system is old, though we’re not yet sure how old. Also, while it’s a broad constraint, it’s still a constraint. When it was first discovered, we only knew that the star had to be older than 0.5 billion years, since that’s how long it takes for these stars to contract. It could have been almost as old as the universe itself.

“Our results really help constrain the evolution of the TRAPPIST-1 system, because the system has to have persisted for billions of years. This means the planets had to evolve together, otherwise the system would have fallen apart long ago,” said Adam Burgasser, an astronomer at the University of California, San Diego, and the paper’s first author. 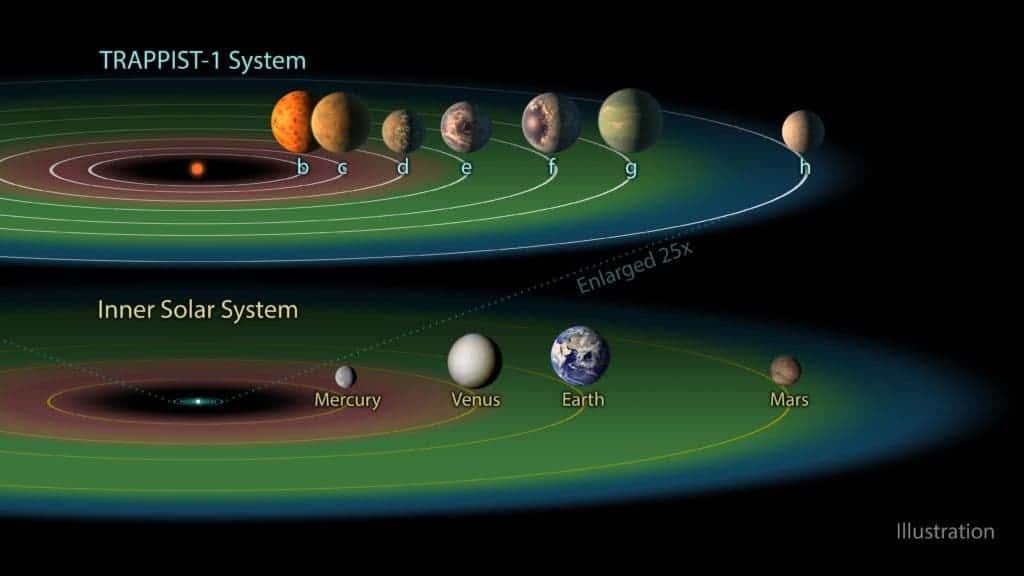 The system overlaid over the habitable zone.
Image credits: NASA/JPL.

It’s not clear exactly what this means for the habitability of the planet. It’s known that older stars tend to flare less than younger stars, thus having less of a chance of wiping out potential life. But this also means that the planets have absorbed billions of years of high-energy radiation, which might imply that their atmospheres have boiled off. A decent analogy here is Mars, which once hosted an atmosphere which has since been wiped off by radiation.

But there are more aspects to consider. TRAPPIST-1 planets have lower densities than Earth, which makes it more likely for them to hold vast reservoirs of volatile molecules, which could generate thick atmospheres, strong enough to protect the planets from radiation. Especially the two outer planets, planet g and planet h might have been lucky enough to escape with an atmosphere.

But if any life exists on these planets, it’s almost certainly way more hardy than that on Earth.

“If there is life on these planets, I would speculate that it has to be hardy life, because it has to be able to survive some potentially dire scenarios for billions of years,” Burgasser said. 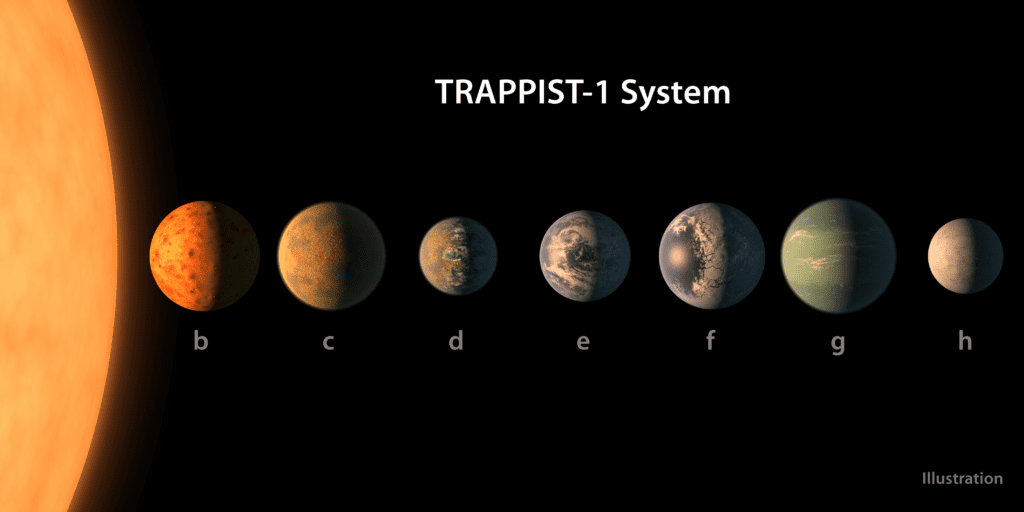 TRAPPIST-1 is an ultra-cool dwarf star in the constellation Aquarius, and its seven planets orbit very close to it, which puts them in the Goldilocks area.
Credits: NASA/JPL-Caltech

Future observations will focus on identifying potential atmospheres around these planets. If such an atmosphere exists, then it likely existed for billions of years, which makes the possibility of extraterrestrial life significantly more likely. The observations will also help astronomers better understand other similar systems form and develop.

“These new results provide useful context for future observations of the TRAPPIST-1 planets, which could give us great insight into how planetary atmospheres form and evolve, and persist or not,” said Tiffany Kataria, exoplanet scientist at JPL, who was not involved in the study.